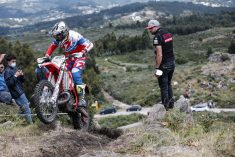 Following hot on the heels of the series opening GP of Portugal, the 2021 Borilli FIM EnduroGP World Championship is back in action this coming weekend as the six-round series heads east across Europe to Edolo, Italy for the ACERBIS GP of Italy. With the first round of the championship delivering two days of high drama and close racing, round two is expected to see much of the same as the battle for EnduroGP top-honours continues.

Always a stand-out event in any EnduroGP World Championship season, the ACERBIS GP of Italy is set to challenge the world’s best as the Moto Club Sebino organised race takes competitors up into the mountains north-east of Milan. Last hosting an EnduroGP World Championship event back in 2018, in 2021, riders will face four laps of 30 kilometres, each split into two-time controls. With the AKRAPOVIC Super Test set to kick things off on Friday night, each day will feature four ACERBIS Cross Tests, four CHAMPION Enduro tests and four NERVE by JUST1 Extreme Tests, ensuring close competition and another challenging EnduroGP event.

In the EnduroGP World Championship the four-rider fight for podium places that quickly established itself at last weekend’s GP of Portugal looks set to continue. And with three of those riders competing for Italian manufacturers, the ACERBIS GP of Italy will be a hugely important event for more than one reason. All wanting to establish themselves and their machines at the top of the results, it’s Brad Freeman (Beta) who carries a slender four-point advantage into the Moto Club Sebino organised event. As the only two-stroke inside the top eight of the EnduroGP class headed into round two, following a very strong set of performances in Marco de Canaveses, Brad starts the ACERBIS GP of Italy as the rider to beat.

Close behind Freeman is EnduroGP’s lead non-European rider – Wil Ruprecht (TM). Carrying impressive pre-season form into the series opener, not only did the Australian confirm himself as having the speed to fight for the EnduroGP title, he also claimed his first ever senior world championship day win as a result. Just one point behind Ruprecht, defending EnduroGP World Champion Steve Holcombe (Beta) was another to show impressive speed in Portugal, but was unable to translate that pace into day wins.

Also failing to turn impressive speed into the results he’d hoped for was Josep Garcia (KTM). Returning to the series after several years away from it, the Spaniard proved fast but saw too many crashes hamper his performances. Garcia will unquestionably want to eliminate the mistakes from his riding in Edolo and better his opening round results.

In his nineteenth GP season (motocross and enduro combined), Guarneri’s winning Enduro1 class ride on day one in Portugal was in many ways the stand-out result of the event. Securing his first ever EnduroGP World Championship win, handing Fantic an early season victory, and proving that despite being notably older than all his classmates, Guarneri arrives at his home GP as the unexpected E1 class leader.

The day one E1 class winner in Portugal was Andrea Verona (GASGAS), who sits tied on points with Guarneri at the top of the championship standings. Set for what will be a key GP for the defending class champion, the GASGAS rider is expected to again be embroiled in an all-Italian battle for the Enduro1 top spot.

With Guarneri and Verona tied on 37 points at the top of the E1 tables, third placed Bernardini and fourth placed Christophe Charlier (Beta) are also tied on 25 points each. With Bernardini stepping into EnduroGP World Championship competition for the first time with good effect, boosted by competing in his home GP, we might well see the Honda rider challenge for the top of the podium.

The Enduro2 class sees Steve Holcombe lead the way with the Beta rider holding a slender two-point lead over Wil Ruprecht (TM) with Josep Garcia (KTM) just three points adrift. With Holcombe topping the class on day one in Portugal before earning a runner-up result on day two, consistency certainly looks to be the name of the game in both the hotly contested Enduro2 and EnduroGP classes.

With Ruprecht having got a taste for world championship victory, and with Garcia determined to stop the Beta and TM mounted duo ahead of him in the class standings extending their slender advantages any further, competition for the Enduro2 class win will unquestionably be close at the ACERBIS GP of Italy.

In the Enduro3 category there will likely be no stopping Brad Freeman (Beta) in Italy, as the Brit showed impressive speed and commitment at the series opener. Topping each of the two days of competition by more than one-minute, it’s unlikely that anyone other than Freeman will win in Edolo.

Of those hoping to stop Freeman, Spaniard Jaume Betriu (KTM) got closest in Portugal with a 2-2 result, splitting the class two-strokes. Behind him, Danny McCanney (Sherco) holds third in the E3 standings with brother Jamie (Husqvarna) in fourth.

In the Enduro Junior class two Italians lead the way ahead of their home ACERBIS GP of Italy. Matteo Pavoni (TM) holds a four-point advantage at the top of the class and will look to extend his lead over Lorenzo Macoritto (TM) with Finland’s Roni Kytonen (Honda) third.

With three riders occupying the top three positions at the head of the Enduro Youth class, Fantic are all but assured a successful weekend in Edolo. With Sweden’s Albin Norrbin and Britain’s Harry Edmondson tied on points as class leaders, and with Italy’s Kevin Cristino third, the Italian brand is sure to enjoy more success.