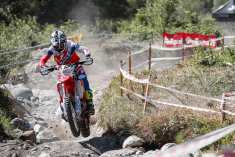 It was a battle to the very end on day one of the second round of the Borilli FIM EnduroGP World Championship as Britain’s Brad Freeman (Beta) eventually edged out Australia’s Will Ruprecht (TM) for the win at the ACERBIS GP of Italy. A thrilling, day-long battle between the duo saw Freeman snatch the EnduroGP win by just two seconds. There was plenty for the Italian fans to cheer about as Andrea Verona (GASGAS) topped Enduro1 with Matteo Pavoni (TM) delivering a winning ride in Enduro Junior. Harry Edmondson (Fantic) put the Italian manufacturer on top in Enduro Youth.

EnduroGP – Dominant showing from Freeman and Ruprecht
With little time to recover from last weekend’s incredible opening round of the Borilli FIM EnduroGP in Portugal, it was back to business for the competitors for the second stop of the season in Edolo, Italy. With round one delivering some incredibly tight racing, there was added excitement in the paddock at round two as Hard Enduro specialists Billy Bolt (Husqvarna), Manuel Lettenbichler (KTM) and Taddy Blazusiak (GASGAS) got themselves in on the mix. Bolt quickly made his presence felt with a monumental effort in Friday’s AKRAPOVIC Super Test. A masterclass ride from the FIM SuperEnduro World Champion saw him top the time sheets by four seconds.

But Saturday told a different story, as competitors faced down a full day of racing, with no fewer than 12 special tests. Highly motivated from his debut EnduroGP class win last week, Ruprecht set the fastest time on the opening CHAMPION Enduro Test to take control of the race lead, but with Freeman in check the battle was most definitely on.

Sharing 10 of the remaining special test wins between them, the duo consistently set the pace as the fight for victory took them clear of the chasing pack. With Ruprecht holding a five-second lead entering the final test of the day, it was Freeman who topped the NERVE by JUST1 Extreme Test and with it claimed an eventual overall win.

Such the pace of the top two, Spain’s Josep Garcia (KTM) completed the EnduroGP podium, an incredible one minute and 50 seconds behind Freeman. Garcia didn’t have much room for error though, with Andrea Verona just over two seconds behind in fourth. Posting arguably one of the most impressive rides of the day, Bolt showed his AKRAPOVIC Super Test win was no fluke to take fifth. Reigning Enduro Junior champion Hamish MacDonald (Sherco) rounded out the top six. A bad day for EnduroGP champion Steve Holcombe (Beta) saw him slip down the leaderboard to eighth.

“It’s been one of the best battles I’ve had in EnduroGP,” told Freeman. “Wil and myself were fighting for the top time almost every test and that really pushed us on. We were both on the limit and coming into the final NERVE by JUST1 Extreme Test I had to give it 100 per cent to win. Hopefully tomorrow is more of the same!”

Enduro1 – Italian 1-2 for Verona and Guarneri
The fight for top Enduro1 honours was a case of national pride between Verona and Davide Guarneri (Fantic). With nine special test wins to his credit, Verona kept Guarneri covered to secure his second win of the season. Belgium’s Antoine Magain (Sherco) ended his day in third, with Samuele Bernardini (Honda) and Kirian Mirabet (Honda) fourth and fifth respectively.

“It’s been a great day on home soil,” said Verona. “Winning Enduro1 and being very close to the podium in EnduroGP is awesome. I felt like I rode strong today with only two small crashes for the day. My goal is to try and repeat this form tomorrow.”

Enduro2 – Ruprecht leads the way
Enduro2 class honours belonged to Ruprecht on the opening day of racing in Edolo. Locked in a battle for the overall EnduroGP win, the Australian comfortably stretched out an unassailable lead over Garcia in second. Thanks to his top-five ride in EnduroGP, Bolt raced his way onto the Enduro2 podium with third. MacDonald was fourth with Holcombe fifth.

“It’s been great to come here and go top-five overall and third in Enduro2,” said Bolt. “Of course, winning the AKRAPOVIC Super Test was brilliant, but honestly I was just hoping for a top-10 result, so I’m blown away by this. Hopefully I’ve some left in the tank to keep pushing tomorrow.”

Enduro3 – Freeman delivers masterclass
Although only three races into the 2021 season, Freeman already looks untouchable in Enduro3. Claiming yet another clean sweep of special test wins, the Beta rider secured a massive three-minute margin of victory. The fight for the runner-up result was a tighter affair, with Jaume Betriu (KTM) edging out Jamie McCanney (Husqvarna) by 11 seconds. Jamie held off his brother Daniel McCanney (Sherco) by three seconds for third, while Australia’s Andrew Wilksch (Husqvarna) took fifth.

Enduro Youth – Fantic lead the way
In Enduro Youth it was once again a Fantic-powered freight train for the top placings. Britain’s Harry Edmondson returned to the top step of the podium following his day one victory in Portugal. He claimed an 11-second winning margin over teammate Albin Norrbin (Fantic). Italy’s Kevin Cristino was third, with Riccardo Fabris and Leo Joyon (Beta) rounding out the top five.