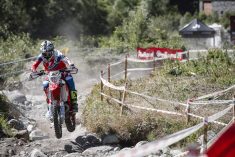 The 2021 Borilli FIM EnduroGP World Championship returns to action this weekend as the series leaves southern Europe and heads north for the first of two consecutive events that will unquestionably play a decisive role in the series’ eventual outcome.

First visiting the sandy tracks and trails of Saaremaa, Estonia the championship then passes its halfway point as it crosses the Baltic Sea to Skövde in Sweden for round four. With competitors having had just two weeks to re-group following the intense opening rounds in Portugal and Italy, the northern European tour will bring with it an important change of terrain as it challenges the world’s fastest enduro racers in its own very sandy, forest covered way!

As the much-anticipated middle chapter of the series, and followed by a lengthy summer break that will allow many competitors to race in this year’s FIM International Six Days Enduro in Italy, both the GP of Estonia and the GP of Sweden will, inevitably, stamp their own unique marks on the series. With the championship making a welcome return to Estonia, which it visited for the first time ever back in 2018, Sweden will once again offer its legendary forests to the series as the battle for EnduroGP glory rolls on.

So far, it’s been Britain’s Brad Freeman (Beta) who has had the upper hand in this year’s EnduroGP World Championship. Claiming three overall day wins from four starts to hold a 10-point lead at the top of the class, the tall Brit is comfortably placed and ready to play in the sand in Saaremaa. A rider that is every bit as fast in the soft stuff as he is on hard-pack, racing his 300cc two-stroke, Brad will again be looking for day wins and, if possible, a maximum-points haul.

Behind Freeman, knowing that no one can afford to let the 2019 FIM EnduroGP champion build upon his early series winning form, Wil Ruprecht (TM), Steve Holcombe (Beta) and Josep Garcia (KTM) are ready to step up and challenge for victory. But it’s Ruprecht, second in the EnduroGP championship and the only rider to have taken a day win away from Freeman so far in 2021, who is best placed to use the four days of racing on offer in Estonia and Sweden to wrestle the championship lead away from his Beta mounted rival. In doing so, the Australian would ensure the EnduroGP title fight stays as close as possible heading into the summer break.

image 2.jpg
Powering to yet more Enduro2 class wins is exactly what Wil Ruprecht (TM) is aiming for in Estonia and Sweden © Future7 Media

It’s a similar story for both defending EnduroGP champion Steve Holcombe (Beta) and Spain’s Josep Garcia (KTM) with each rider hoping to overcome what were frustrating opening rounds and show their true form in Estonia and Sweden. Unable to compete at his best through injury at round two, Holcombe is ready to get back to winning ways while Garcia knows that his hard-charging riding style will be well-suited to the sandy Estonian special tests. Needing to show that just like Freeman and Ruprecht they too have the pace to win, Holcombe and Garcia will be looking to ensure a four-rider fight for the top step of the EnduroGP podium.

In Enduro1 the two-rider battle between Italians Andrea Verona (GASGAS) and Davide Guarneri (Fantic) looks set to continue as defending class champion Verona and veteran racer Guarneri step away from their home round of the series and take their class battle into forests that will offer no rider any advantage. Looking to continue the run of podium finishes he enjoyed at the Italian GP, Belgium’s Antoine Magain (Sherco) will likely again be the closest challenger to the speedy Italians.

With only one rider having beaten him in Enduro2 class competition so far in 2021, Wil Ruprecht (TM) carries a huge amount of confidence into the Estonian and Swedish rounds of the series, as well as a clear 10-point class lead over Steve Holcombe (Beta).

But with Holcombe looking to bounce back from injury and with Josep Garcia (KTM) just one-point adrift of the Brit, it’s going to be game on in the Enduro2 class. Add into the mix New Zealand’s Hamish MacDonald (Sherco) who is searching for his first ever senior class podium result, and Finn, Eero Remes (TM) who welcomes the series arrival a little closer to his home, and there’s going to be no shortage of action.

Ensuring the northern Europe tour will sign off on a high note, the GP of Sweden will welcome the Enduro Women’s class back to the series. With Spain’s Mireia Badia (GASGAS) and Laia Sanz (GASGAS) topping the standings on 35 points each, and with Britain’s Jane Daniels (Fantic) right behind in third, there’s everything to play for with the fourth round of the 2021 Borilli FIM EnduroGP World Championship sure to serve up yet more exciting racing.