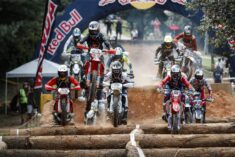 Hot on the heels of round four in Romania, the FIM Hard Enduro World Championship headed to the new ground of North America for the iconic Red Bull TKO in Sequatchie, Tennessee. High humidity mixed with an intense race format and rough, rocky terrain, ensured round five was anything but an easy ride.

A Sunday morning Hot Lap qualifier determined the starting order for the first of two TKO races, where the field of 60 riders would be whittled down to 30 and then finally down to 15 for the 45-minute Final Knockout.

While Red Bull KTM Factory Racing’s Manuel Lettenbichler was fastest in the Hot Lap, Bolt had the measure of everyone by comfortably winning both times out in the TKO Races. The opening TKO Race didn’t deliver many surprises as the top riders safely made it through, but second time out, Blazusiak was one of the top players not to make the 15-rider cut for the final, ending his day earlier than expected.

Lining up for an intense Final Knockout, Lettenbichler quickly got his wheel in front and led the opening lap before Bolt took over. The duo were close throughout until a tricky hill climb caught Bolt out, letting Lettenbichler back in front. With just one lap to go, Lettenbichler had the victory in his grasp, but Bolt refused to back down, and with time running out he made one last push to secure the win by just two seconds.

Behind the leaders, FMF Factory Racing’s Trystan Hart was enjoying a solid ride. While in a strong position early on, he wasn’t able to match the pace Bolt and Lettenbichler were setting, yet nevertheless ended his race on the podium in third.

Sherco Factory Racing’s Wade Young put in a strong ride to take fourth, with his teammate Mario Roman in fifth.

The FIM Hard Enduro World Championship continues with round six at Poland’s Hero Challenge on September 11/12.

Billy Bolt (Husqvarna): “After winning the two qualifiers, I got out to a good lead in the final and felt in control until I messed up the hill climb in the closing stages. Then it got intense! At that stage I didn’t have much left in the tank to charge back at Mani. I got back up to him and just managed to get it done on the final lap. It’s been tough in this heat too, something I’m not that used to. But the crowd didn’t disappoint, the noise and atmosphere was wild for the final. Overall, this win has been great for my championship and now I’m sitting just one point behind Mani.”

Manuel Lettenbichler (KTM): “It got pretty close for the win with Billy. I got the hotshot in the final and he passed me, but we stayed quite close and rode almost together after that. I was leading on the last lap when I made a mistake and caught my foot peg on a rock and got stuck, so he passed me back. But it was close until the end. This race is a cool format. It’s nice to do something different and with the terrain here and the humidity, it makes it really hard work.”

Trystan Hart (KTM): With the full Hard Enduro roster here, third is my best ever result with these guys so although I didn’t win, I’m pretty happy with that. In the final the top guys just sprinted right off the bat and I didn’t, so I lost that early tow and rhythm. But I gave it my all today and when I crossed the finish line I had nothing left in the tank. To be on the podium with the best riders in the world is pretty cool.”