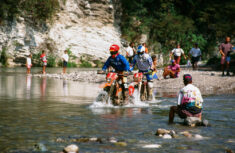 When the 95th edition of the FIM International Six Days of Enduro (ISDE) gets underway in Lombardy / Piedmont, Italy from 30th August to 4th September 2021, it will mark the eleventh time that this enduro mad country has hosted this historic event. Only Great Britain, which held the original competition in 1913 has welcomed the ISDE more times and holds the record with twelve editions having been held within its territories.

Italy’s long association with this demanding competition, which was originally titled as the International Six Days Trial (ISDT) before being renamed ISDE in the early eighties, began in 1931 as the town of Merano had the unique honour of hosting the event in back-to-back years. The Italians triumphed on home soil on the first of these occasions before giving way to the British who won the main two trophies when the ISDE returned a year later.

It would be 1948 before the then ISDT revisited Italy, this time in San Remo and it was again Great Britain who went home with both the International Trophy and Silver Vase. The British team continued to enjoy the Italian hospitality as they again lifted the main silverware when the competition was held in Varese in 1951.

There would be a seventeen-year hiatus ahead of what remains the oldest competition in the FIM calendar coming back to Italy. The well-known town of San Pellegrino Terme was the setting for the 1968 edition where Germany secured the International Trophy and the home fans witnessed the Italian team taste victory in the Silver Vase division.

The former country of Czechoslovakia proved to be the dominant force when Camerino staged the 1974 ISDT, as their riders went home with the two foremost team awards as Italy organised this prestigious competition for a sixth time in its history.

1981 was the next time that Italy would act as the host to the freshly named ISDE. Isola d’Elba was the venue for this memorable edition, as the home nation won both of the new team classes – namely the now established World Trophy and Junior Trophy competitions. Five years later as San Pellegrino Terme accommodated the ISDE for a second time and was the scene of the 1986 jubilant celebrations as once again the host nation won both the World and Junior Trophies.

After an extended break, Italy was back in charge of delivering another notable running of the ISDE in 1997. Brescia being the last venue where the Italians achieved home wins in both the World Trophy and Junior Trophy categories. The beautiful island of Sardinia was the host in 2013, which marked the tenth time that the ISDE had been held on Italian soil.

Eight years later, and after having been postponed twelve months due to the COVID-19 pandemic, the FIM International Six Days of Enduro is proudly returning to the Italian heartland of Enduro and to some of the best off-road terrain in Europe. Lombardy / Piedmont will once again soon welcome riders from across the World for six enjoyable, but demanding days in the saddle from 30th August to 4thSeptember 2021.