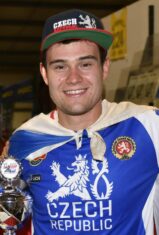 Decision on the very last day
It was not until Saturday, 2 October 2021, at the final of the European Enduro Championship in Hellendoor, the Netherlands, that the title of best rider in all classes was decided:
Krystof Kouble from the Czech Republic competed: the Sherco rider had started the day eight championship points behind and still finished the season as the new champion! “I felt comfortable from the start and didn’t make any mistakes,” the junior was pleased afterwards. In fact, he had not won a single special stage by the halfway point, but was already leading by a clear margin because the competitors behind him were making life difficult for each other. Especially his biggest competitor, the Italian Enrico Rinaldi, did not manage well at all: “After the overnight rain, the track was very slippery and I didn’t want to take to much risks.” Towards the end of the day things went a little better again, but the wrong lane choice in the last extreme test then cost him almost half a minute and threw him back to sixth place in the overall standings. This ate up his points lead and Kouble was crowned the new champion.

The only consolation for Rinaldi is that he still managed to secure the title in the Junior 2 class. There, his lead in the championship was enough because not so many riders could place themselves between him and Kouble and thus increase the points difference.

But it shows again that the European Enduro Championship is a forge for young talents: Once again a junior won the overall ranking of all riders, as it has been seen again and again in the last years.

In the women’s category, Justine Martel from France did not do well on either day: “I have never ridden in such deep sand before,” the KTM rider admitted afterwards. But two third places were enough in the end to take her first championship title. 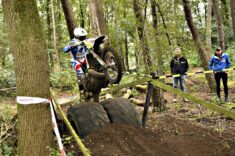 Maurizio Micheluz, on the other hand, had already won his eleventh championship title in the 250cc two-stroke class: “When my last competitor, my compatriot Giuliano Mancuso, dropped out with technical problems in the first stage in the morning, I was practically already champion. I enjoyed the day all the more and only rode for the team classification”.

He also became champion of the trade teams with the Italian team “Diligenti Racing”.

The European Champion in the U21 class, Fine Pyry Juupaluoma, who had already been crowned the day before, was lucky: His bike had an electrical problem after the first lap that could not be fixed quickly. So he dropped out, but the title was already in his pocket.

A special feature of the final is the additional classification of the national teams, the Trophy teams: Here, the team of the Czech Republic won – with the champion Krystof Kouble, the junior champion Matyas Chlum, the champion of the large four-stroke class Jaromir Romancik and runner-up of the two-stroke class Jiri Hadek. Italy came second, ahead of the Netherlands. In the junior trophies, France won ahead of the Netherlands and Germany.