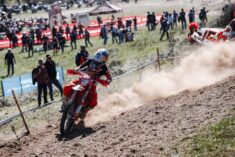 The opening day of racing at the BORILLI FIM EnduroGP World Championship final round in France saw multiple champions crowned with Andrea Verona (GASGAS), Josep Garcia (KTM) and Brad Freeman (Beta) taking the respective Enduro1, Enduro2 and Enduro3 titles. Separated by just 10 seconds, the fight for top honours in EnduroGP was red hot on day on at the GP of France with Josep Garcia (KTM) placing ahead of Brad Freeman (Beta), and Steve Holcombe (Beta).

With Langeac in France marking the sixth and final stop of this year’s BORILLI FIM EnduroGP World Championship, the opening day of competition was one of celebration and success. At the head of the field, Garcia claimed an important EnduroGP class win to keep his title hopes alive with one day remaining. A win by Laia Sanz (GASGAS) brings her closer to securing this year’s Enduro Women’s crown.

EnduroGP – Title Fight Tightens With Garcia win
The EnduroGP class is set to go down to the wire as Josep Garcia (KTM) claimed victory on day one to keep his title hopes alive. A revelation in this second half of the season, Garcia backed up his winning form from last weekend in Portugal with a closely fought win today.

While it was Thomas Oldrati (Honda) who won Friday’s AKRAPOVIC Super Test, Garcia did himself no favours with a crash, which saw him 16th as he began on Saturday. But setting the fastest times on the opening ACERBIS Cross Test, CHAMPION Enduro Test and NERVE by JUST1 Extreme Test, Garcia looked ominous behind early leader Brad Freeman (Beta).

However, Freeman stood his ground and kept control of the lead up until the final lap. Topping the last CHAMPION Enduro Test, Garcia found his way into the lead and despite Freeman winning the final NERVE by JUST1 Extreme Test, the Spaniard claimed victory for the day. Runner-up for Freeman positions him as champion elect, holding a 16-point advantage over Garcia heading into the final day.

While eyes were on Garcia and Freeman, outgoing EnduroGP champion Steve Holcombe (Beta) enjoyed one of his strongest rides this year, showing signs of a rider who’s returning to form. Ending his day 10 seconds behind Freeman, Holcombe made a welcome return to the EnduroGP podium with third. Jaume Betriu (KTM) secured his best result of the season with fourth, while Will Ruprecht (TM) was fifth.

Enduro1 – Verona Crowned Enduro1 World Champion
With hopes of wrapping up the Enduro1 title with a day to spare, Andrea Verona (GASGAS) began his GP of France in a determined mood. Fastest Enduro1 rider in the AKRAPOVIC Super Test, he won the opening CHAMPION Enduro Test and NERVE by JUST1 Extreme Test to take an early lead.

Faced with a strong challenge from both Matteo Cavallo (TM) and Theophile Espinasse (Honda) during the middle part of the day, Espinasse held the Enduro1 lead entering the final lap. Picking up his pace, the Italian raced his way back into contention to claim an important win and with closest rival Davide Guarneri (Fantic) in fourth, he became the 2021 FIM Enduro1 World Champion.

“It feels amazing to win today to become the world champion – I wasn’t quite expecting this,” told Verona. “It was a tough day. I didn’t think I would get the victory, so to pull it off and win the title with a day to spare is fantastic. A big thank you to GASGAS and the team. It’s been an incredible season for us.”

Enduro2 – Garcia Becomes Enduro2 World Champ
With his win in EnduroGP, Garcia also topped Enduro2. But adding to the occasion, his victory allowed him to claim the Enduro2 championship honours with one day remaining. After a three-year absence from the championship, clinching the Enduro2 crown was an important and emotional milestone in the Spaniard’s career.

“It’s been a perfect day,” said Garcia. “After being away from EnduroGP for three years to return this season and win the Enduro2 crown is an incredible feeling and an emotional moment for sure. Of course, there is still a chance that I could also win EnduroGP, but this title means a lot and I can’t thank KTM enough for their support. We’ll see tomorrow if the double is possible!”

Racing his way back to speed and fitness, Steve Holcombe was on flying form in France. Clearly enjoying the classic French tests, the Beta rider topped three tests to finish 13 seconds behind Garcia in second. Will Ruprecht took third. Putting in a solid performance, Joe Wootton (Husqvarna) ended his day nine seconds behind Ruprecht in fourth, while Thomas Oldrati (Honda) was fifth.

Enduro3 – Freeman Defends Enduro3 Crown
As it has been all season so far, Enduro3 was again all about Brad Freeman. The Beta rider was untouchable as he also fought for overall EnduroGP honours. Comfortably powering his way to an incredible 11th consecutive win, he successfully defended his Enduro3 crown to become a six-time FIM Enduro World Champion.

“It feels great to wrap up the Enduro3 title and back up what I won last year,” said Freeman. “I really love riding this 300 two-stroke and the bike never missed a beat all season. I’m really happy to have brought another title to the team because they work so hard for this. Hopefully tomorrow we can go on to win the big one and get that EnduroGP crown.”

Enduro Women – Sanz Moves Closer To Title
The EnduroGP of France saw the Enduro Women back in action for the final time this season. Picking up where she left off in Sweden, Laia Sanz (GASGAS) took the win. Although second to Jane Daniels (Fantic) in the AKRAPOVIC Super Test, Sanz took control straight away on Saturday to win every special test. With a 54-second margin of victory, Sanz now has a comfortable 12-point lead over Daniels with one day remaining.

“It was an important day to win to help my championship hopes,” told Sanz. “I didn’t feel like my speed was perfect, but I had no major mistakes and was able to remain consistent. I have a nice points gap heading into tomorrow, but I still need a strong result to get the job done!”

Finishing as runner-up to Sanz on day one, Daniels now moves ahead of Mireia Badia (GASGAS) – third on day one – in the fight for vice-champion. However, only one point separates the duo, meaning tomorrow is all to play for. Justine Martel (KTM) and Rosie Rowett (KTM) completed the top five.

Enduro Junior – Joy For Etchells
Enduro Junior saw Jed Etchells (Fantic) take victory. His first win of the season, the Manxman battled right to the final test with Bernat Cortes (GASGAS) to top the podium by just over two seconds. In the fight for this year’s title, championship leader Matteo Pavoni (TM) had a mixed day at the office finishing third. But with closest rival and teammate Lorenzo Macoritto placing fourth, Pavoni holds a 17-point advantage with one day remaining and looks to be the champion elect.