Italy’s Andrea Verona (GASGAS) has claimed first blood at the end of the first full day of competition at the opening round of the 2022 WPTGlobal FIM EnduroGP World Championship, the ACERBIS GP of Spain in Lalin. 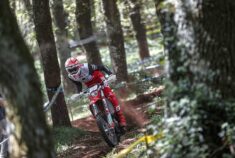 In what boiled down to a three-way fight for victory, the GASGAS Factory Racing rider emerged victorious from the final Just1 Enduro Test to secure his maiden EnduroGP overall win. With less than four seconds separating the top three, Britain’s Steve Holcombe (Beta) and Australia’s Will Ruprecht (TM) completed the EnduroGP podium on day one.

Holcombe wasted no time in getting up to speed on Saturday morning, winning the opening POLISPORT Extreme Test by an impressive seven seconds to take an early lead. From good, things very quickly went bad for the Brit as a heavy fall on the ACERBIS Cross Test saw him lose precious seconds. At the end of the opening lap the positions had changed – fastest in the JUST1 Enduro Test, Verona headed Holcombe by less than two tenths of a second, with Honda’s Nathan Watson close behind in third.

Throughout the day the positions chopped and changed, and with Australian Ruprecht joining the mix, it was all to play for on the final lap. Entering the final test, Holcombe, Ruprecht, and Verona were separated by just two seconds. But with the Italian bettering his rivals, he exited the JUST1 Enduro Test as a first-time EnduroGP class winner.

Behind the top three of Verona, Holcombe, and Ruprecht, a blisteringly fast final test by Spain’s Josep Garcia (KTM) slotted him into fourth. Mistakes throughout the day ultimately kept Garcia off the podium. A strong ride from Watson saw him end the day fifth overall. A difficult season opener for Freeman dropped him to ninth, but he will look to rebound on Sunday.

Verona, Holcombe, and Freeman win in Enduro1, Enduro2, and Enduro3 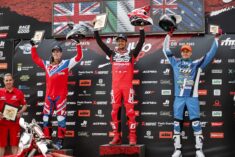 As the EnduroGP class winner, Verona naturally also topped the Enduro1 category, to get his title defence off to a perfect start. Behind him, Honda’s Thomas Oldrati earned a hard-fought second, with Beta-mounted Frenchman Theophile Espinasse third.

With the top Enduro2 competitors fighting for the EnduroGP overall, the pace was high. Despite a small mistake on the final test, Holcombe hung on to win by just one tenth of a second from Ruprecht. After a mixed start, Garcia came on strong in the closing stages to finish third and place just two seconds behind Holcombe.

While things didn’t go his way in the EnduroGP category, Freeman still put in a winning ride in Enduro3. Class newcomer for 2022, Davide Guarneri (Fantic), who starts his 20th season of world championship competition in 2022, didn’t waste any time in settling himself in and muscled his way onto the podium in second place. Matteo Pavoni (TM), Junior champion in 2021, made a strong step up into the senior ranks to finish on the podium in third.

Daniels, Pichon, and Edmondson top Women, Junior, and Youth podiums
The Women’s class was all about one rider – Jane Daniels. The Brit was the rider to beat winning all but two special tests to secure a commanding 70-second margin of victory on her Fantic. Rieju mounted Mireia Badia enjoyed a strong ride to take second, with Rosie Rowett (KTM) third.

In the Junior category a new name rose to the top step of the podium as Sherco’s Zach Pichon raced his way to victory. After losing a lot of time on the opening ACERBIS Cross Test, Pichon battled his way back to the front, edging out Honda’s Roni Kytonen for the win. Fantic’s Jed Etchells placed one second behind Kytonen for third.

The Youth class saw another victory for Fantic with Harry Edmondson topping the podium. After a tight battle with Samuli Puhakainen (TM), Edmondson won by just seven tenths of a second. Sherco’s Thibault Giraudon completed the top three.

Andrea Verona (GASGAS):
“It feels amazing to get my first victory in EnduroGP class. This year my goal was to try and win EnduroGP at least once, so to do it on day one is incredible. Hopefully this is just the start of more victories to come.”

Steve Holcombe (Beta):
“Things started off great on the first extreme test, but I had a massive crash on the next cross test. But I’m pleased with how I regrouped and was able to get back in the battle for the win. I’m a bit gutted to have missed out at the end, but I’m fired up to go again tomorrow!”

Wil Ruprecht (TM):
“What a way to open the season, it was crazy close all day! I am happy with how I’m riding, so I’m pleased to be on the podium in this company. I’ll regroup and get ready to go again tomorrow.”