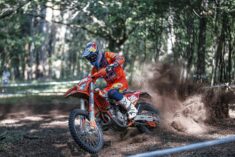 Josep Garcia (KTM) gave his Spanish fans plenty to cheer about on day two of the 2022 WPTGlobal FIM EnduroGP World Championship opener in Lalin, Spain, as the KTM Factory Racing star battled his way to the top step of the EnduroGP podium in impressive style.
Day one winner Andrea Verona (GASGAS) continued to prove himself to be a serious contender for the 2022 EnduroGP title by backing up his day one victory with a runner-up finish to Garcia. Defending EnduroGP champion Brad Freeman (Beta) regrouped impressively following a disappointing performance on the opening day to complete the overall top three.

KTM’s Josep Garcia took a home win on day two of the ACERBIS GP of Spain.
Day one winner Andrea Verona and Brad Freeman joined Garcia on the EnduroGP podium.
Double delight for Fantic-mounted Jane Daniels who won the Women’s class.
After an exciting start to the ACERBIS GP of Spain on day one, all eyes were on the front runners in the EnduroGP class to see who would take victory on day two. Brimming with confidence following his maiden EnduroGP victory on day one, GASGAS Factory Racing’s Andrea Verona had his sights set on a repeat win and what he hoped would be a perfect scorecard at round one.

The battle was fierce on the opening lap with Josep Garcia (KTM) winning both the ACERBIS Cross Test and JUST1 Enduro Test to build a 16-second lead over Verona and Freeman. TM’s Will Ruprecht and Steve Holcombe (Beta) completed the top-five at the end of lap one.

Freeman again posted the fastest time on the POLISPORT Extreme Test at the start of lap two. But Garcia had the ACERBIS Cross Test and JUST1 Enduro Test mastered as he built his advantage to 22 seconds, with just one lap to go. Controlling his lead on the final lap, Garcia ended day two as the EnduroGP winner.

Behind the Spaniard it was an intense and close fight between Freeman and Verona for the runner-up result. Freeman made it three-for-three in the POLISPORT Extreme Test with another fastest time. As they entered the final test of the day, the duo were separated by just eight hundredths of a second.

All to play for, Verona laid down a scorcher to top the time sheets by four seconds and with it end his day as runner-up. But more importantly he wrapped-up his participation in the ACERBIS GP of Spain as the early EnduroGP championship leader.

Enduro1, Enduro2, and Enduro3 class wins for Verona, Garcia, and Freeman
In Enduro1 it was all about Verona, just as it had been on day one. His battle for position in EnduroGP saw him power ahead to a one-minute margin of victory over Thomas Oldrati (Honda). Matteo Cavallo (TM) rounded out the top three.

The Enduro2 class was the Garcia show. The Spaniard had the category on lockdown and secured a 59-second win over Ruprecht. Sherco’s Hamish MacDonald finished just five seconds behind the TM mounted Australian for third and earned his first podium of the 2022 season.

Up to speed on day two, Freeman left few opportunities for his Enduro3 classmates. Convincingly winning all nine tests, he ended his day over one minute and 42 seconds clear of Fantic’s Davide Guarneri in second. Another solid outing for senior class rookie Matteo Pavoni (TM) saw him finish third.

Daniels and Pichon win again in Women and Junior classes
Dominating the Magnorange FIM Women’s Enduro World Championship in Spain from start to finish, Fantic’s Jane Daniels made it two wins from two starts in Lalin with a dominant class win on Sunday. Ever consistent, Mireia Badia (Rieju) took the runner-up spot with Rita Vieira (Yamaha) finishing third ahead of her home round of the series next weekend in Portugal

Fantic again raced to top honours in Enduro Youth, though this time it was Kevin Cristino who took the win. Teammate Harry Edmondson made it a 1-2 for Fantic, while Samuli Puhakainen (TM) completed the top three.

After an exciting and explosive start to the 2022 WPTGlobal FIM EnduroGP World Championship, the series heads to Peso da Regua for the GP of Portugal next weekend, May 13-15.

Josep Garcia (KTM):
“It’s fantastic to come away with the EnduroGP win today. I was riding good yesterday, but an early crash left me playing catch up. I didn’t want that to happen today, so I kept things clean on the first lap. Once I got into the lead it gave me confidence to push a little more.”

Andrea Verona (GASGAS):
“It’s been a great weekend and to start the championship off by taking an early lead in the points is incredible. The tests were tough to master and it’s been a real challenge. Today we had a big fight for the podium. Josep was just a little faster, but I gave it everything on the final test to get second.”

Brad Freeman (Beta):
“It’s not really been the start to the championship I hoped for, but I’m glad to have turned things around today. I gave it everything on the final lap but I just came up a little short for second. To be honest, following my recent injury and catching Covid, it’s the best I can do at the minute. It’s still early days, so we’ll try to improve a little bit more in Portugal.”

Jane Daniels (Fantic):
“It’s been a great start to the championship. To win both days was awesome. Overall, I felt like I had a solid weekend with no major mistakes or problems. I’m looking forward to the next round.”