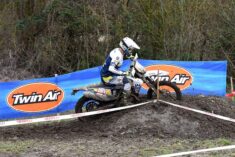 After the end of the first two Rounds, the Borilli Enduro European Championship 2022 has reached its half so, before focussing on the 24MX Round #3, that will take place in Finland in Sipoo, let’s retrace what happened during the first two rounds.

The Italian city of Pietramontecorvino gave the start to 2022 racing season and, despite the bad weather conditions during the days before the event everything went well; two special tests with a high technical rate challenged the more than 120 drivers registered for the event. The Eleveit Enduro Test with its deep channels and the sliding ground and the fast Airoh Cross Test defined the provisional championship rankings by highlighting the protagonists’ names of season 2022. Belgian Erik Willems imposed himself on everyone by taking home a double overall victory that crowned him Championship Leader. The young Italian Manuel Verzeroli with a double victory conquered the first position of the Youth class. Simone Cristini, thanks to first position obtained on day 2, took the lead of Junior 1 while in Junior 2 Enrico Rinaldi led the game. Maurizio Micheluz was the first place finisher of the E1 thanks to the double class victory, a double victory was also recorded by the Englishman Dan Mundell in the E3. Alessandro Rizza took the leadership of the Senior class with a full score of 40 points, obtained thanks to two excellent first positions. The Women class is expertly led by the talented Nieve Holmes, thanks to the victory on both day 1 and day 2. With the conclusion of this first round Luca Piersigilli turned out to be the best driver in the category reserved for 50 cc. The young Italian riding his Beta 50 2t won the first edition of the 24MX 50 CC Trophy, a trophy held on a single stage aimed at promoting discipline among young people and using this particular displacement.

The desire to face a dry race was not enough to bring the sun to the Hungarian city of Tamasi, location of the second Round of the Borilli Enduro European Championship. Bad weather reigned the master again on both days of the race. Erik Willems took home the championship 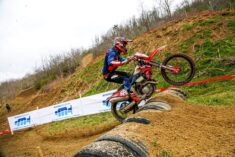 leader’s plate; once again the Belgian and his Husqvarna are the one to beat despite the fact that Dietger Damiaens managed to conquer the overall victory during day 2. Manuel Verzeroli remained at the top of the Youth standings with a 5 point advantage over his compatriot Daniele Delbono. Carlo Minot overturned the Junior 1 standings by snatching from the hands of his compatriot, Simone Cristini, the first provisional position with an advantage of only 3 points. Lorenzo Bernini obtained the Junior 2 leadership; also in this class the gap between the first and second position is small, in fact, the driver of the Czech Republic, Zdenek Pitel, is only 4 points behind the Italian. Maurizio Micheluz continued to lead the E1 class, despite the victory of day 2 being the prerogative of Federico Aresi. Erik Willems remained in the lead of the E2 class with 10 points ahead of the Italian Nicola Recchia, who won the second day of the Hungarian stage. Six points separate Dietger Damiaens from the provisional championship leadership of the E3 class, a position that is now in the hands of the Englishman Dan Mundell. The Senior class has seen only one winner so far, Alessandro Rizza is therefore firmly in the lead, Martin Gottvald and Arne Domeyer are just behind the Italian, in fact they occupy the second position on equal points. Nieve Holmes with 80 total points is largely in command of the Women class while Zuzana Novackova and Marine Lemoine both occupy the second class position.

By the middle of the championship, the protagonists are well defined, but the last word is not yet said. We are only halfway through the championship and everything is still possible. To find out if and what will change, we just have to wait for the 3rd Round that will take place in Finland on July 23rd and July 24th. The current political situation is now well known to the majority of you, however, at the moment there is no reason to cancel or postpone the 24MX Round; the Finnish Round is therefore confirmed and will start regularly at the end of July.

During the 24MX Round #3, in addition to the traditional class that we have learned about in this first part of the championship, there will be a class reserved for electric vehicles. In recent years, electric mobility is wide spreading itself and with it also the events dedicated to it. FIM Europe in agreement with the promoter and the organising motoclub has set up a class reserved for electric motorcycles; you can see these vehicles in action in the last two rounds of the championship. An innovative ranking that will see the best interpreters of this new type of vehicle participate. Stay tuned to know more about this new special class!

Before leaving for the 3rd Round of the championship we have to wait about two months but don’t worry because tonight, you can live, once again, the emotions of the first two Rounds thanks to Time Check. The Live Show is entirely dedicated to the protagonists of the championship. The guests of this episode will be: the leader of the Youth class Manuel Verzeroli, Clement Clauzier, currently third in the same class, Nieve Holmes the first classified of the Women class, Lorenzo Bernini leader of Junior 2 and Killian Lunier, the one who occupies the third position within the Junior 1.

Keep following us on our social pages and the official website of the event to stay up to date on the latest news.