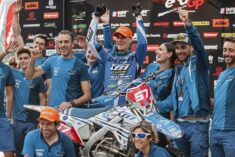 Australian Wil Ruprecht (TM) has raced to overall victory on day one of the WPTGlobal FIM EnduroGP World Championship’s GP of Portugal. The TM rider put together a sensational day’s racing, coming into his own during the super challenging and all-important third and final lap of the day in Peso da Regua. In topping the results, he claimed his first overall EnduroGP class victory of the season.

Ruprecht was made to work extremely hard for the day win, joined on the podium by KTM’s Josep Garcia who finished in a close second. Andrea Verona (GASGAS) completed the EnduroGP podium on the opening day of racing at round two.

Recharged following last weekend’s season-opening ACERBIS GP of Spain, the WPTGlobal FIM EnduroGP World Championship served up another tough day in the saddle, this time on day one of the GP of Portugal in Peso da Regua. With darkness falling on Friday night’s AKRAPOVIC Super Test, Josep Garcia (KTM) managed to top the time sheets, despite being the final rider to take to the start.

With Saturday beginning with a wet and slippery start, it was Sherco-mounted Hamish MacDonald who mastered the technically demanding JUST1 Enduro Test to top the time sheets. In doing so he established himself at the top of an early battle for the lead ahead of Ruprecht and Josep Garcia (KTM), with the Spaniard a further eight seconds back in third.

The tables turned slightly on the following ACERBIS Cross Test as Ruprecht set the quickest time to edge himself in front of MacDonald. The New Zealander was refusing to be out done and in posting the fastest time in the AKRAPOVIC Super Test, MacDonald was back in the lead as they began lap two of three.

After the POLISPORT Extreme Test on lap two, MacDonald looked to be on course to take a debut EnduroGP category win as the 2020 Junior champion headed the field by a very impressive 11 seconds over Ruprecht and Garcia. However, a major crash on the final JUST1 Enduro Test would prove the undoing of MacDonald. Crashing, injuring his knee, and losing over one minute and 47 seconds, the Sherco rider tumbled down the running order and will have to wait another day to claim that elusive EnduroGP win.

MacDonald’s loss was Ruprecht’s gain, as the Australian began the final three tests of the day with a near 10-second lead. Garcia gave chase, and despite a blisteringly fast AKRAPOVIC Super Test, he couldn’t overhaul his rival.

Behind the top two, Verona rode a relatively lonely race. Unable to bridge the gap to the leaders he placed 46 seconds adrift of Ruprecht, while also heading fourth placed Thomas Oldrati (Honda) by 71 seconds. Beta Factory Racing’s Brad Freeman toughed out day one for fifth, finishing eight tenths of a second behind Oldrati.

Class wins for Verona, Ruprecht, and Freeman
Finishing the day on the overall podium in third also led Andrea Verona to his third consecutive day win in Enduro1. Pleased with his efforts and finishing a strong fourth overall in EnduroGP, Thomas Oldrati finished as runner-up in Enduro1 to Verona, once again making good use of his vast experience. TM Racing’s Matteo Cavallo completed the podium in what was a positive day for the Italian manufacturer.

Brad Freeman continues to prove that he’s the rider to beat in Enduro3, securing yet another victory. Fantic’s Davide Guarneri has established himself as the next best rider to the Brit, securing his third runner-up result on the trot. Husqvarna Factory Racing’s Mikael Persson was a new name to take to the podium, with the Swede coming home in third.

Daniels makes it three wins in Women EnduroGP
Placing fourth in Friday’s Super Test, Fantic’s Jane Daniels looked to have given hope to her classmates in the Magnorange FIM Women’s Enduro World Championship. However, she quickly restored normal order by kicking off Saturday with the quickest time in the JUST1 Enduro Test. There was no stopping her thereafter as she raced on to win by almost two minutes. Mireia Badia (Rieju) was second, while home favourite Rita Vieira (Yamaha) took third. 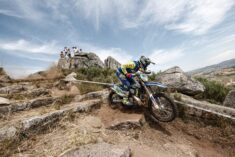 The Junior category saw the now-familiar name of Frenchman Zach Pichon ride to victory. The Team Sherco CH Racing rider was again impressive, claiming seven of the day’s 13 special test wins. The battle for the remainder of the podium was a tight affair, with Luc Fargier (Beta) holding off Jed Etchells (Fantic) for second.

Wil Ruprecht:
“This victory tastes good – it was hard fought for. It was a shame to see Hamish crash out of the fight because we were having an incredible battle. The pace was hot up front, and I think I’ve a few places I can improve on, to push again for the win tomorrow.”

Josep Garcia:
“It worked out into a good day at the end, but I lost some time in the beginning. The Enduro Test was not my best on the first two laps, and I lost ground there. I got into the swing of it on the final lap and closed the gap to Will, but I ran out of time at the end.”

Andrea Verona:
“Finishing third, I’m pretty happy about that. The Enduro Test wasn’t my best and I’ve places to improve on there. Also, let’s see how the weather is tomorrow, there might be some rain on the way!”