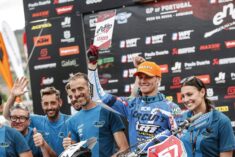 TM Racing’s Wil Ruprecht has claimed his second WPTGlobal FIM EnduroGP World Championship day win of 2022, earning a hard-fought victory on day two of the GP of Portugal. Added to his day one win, Ruprecht made it a perfect weekend at the office with the Australian now leading the overall EnduroGP class with two rounds of the series completed.

In what proved to be another titanic battle at the sharp end of the results sheet, Ruprecht was challenged in the scrap for victory by KTM’s Josep Garcia and Andrea Verona (GASGAS) with the Spanish and Italian duo ultimately placing in second and third respectively in Peso da Regua.

TM Racing’s Wil Ruprecht scored his second EnduroGP class win of 2022 in Portugal
Ruprecht now heads the FIM EnduroGP point standings after round two
Jane Daniels extends her lead in the Women’s category with another victory
The FIM EnduroGP paddock woke to further warm weather and dry conditions in Peso da Regua on Sunday. With all four special tests taking a beating on the opening day of racing, it would prove to be an exceptionally tough and demanding day for all competitors with three laps and 12 special tests to complete.

Ruprecht and Garcia go head-to-head in EnduroGP
At the head of the EnduroGP class, day one winner Wil Ruprecht (TM) picked up where he left off on Saturday by placing quickest in the opening Just1 Enduro Test. The Australian had clearly done his homework overnight, immediately pulling over eight seconds on Josep Garcia (KTM) in second, with Verona on his GASGAS in third. A fast-starting Alex Salvini (Husqvarna) sat fourth after test one.

Three tests in and the top three remained the same at the end of the opening POLISPORT Extreme Test, but importantly Garcia had halved the gap to Ruprecht. The fight for fourth was ever-changing with Mikael Persson (Husqvarna) on top form. He headed Thomas Oldrati (Honda), Theophile Espinasse (Beta) and Salvini by just one second.

After the second ACERBIS Cross Test, Ruprecht was pulling clear of his rivals, building an 18-second advantage over Garcia. But that almost all but disappeared on the following test as a major mistake cut that lead back to five seconds. Garcia was back in touch and duly won the following AKRAPOVIC Super Test to enter the final lap within shot of Ruprecht.

Sensing the attack, Ruprecht won the next two tests to keep the Spaniard at arm’s length. And despite Garcia posting faster times in the final two tests, it wasn’t enough as Ruprecht rode to victory over Garcia and Verona. Behind the top three, it was veteran Oldrati who finally got the better of those around him to take fourth, with Espinasse completing the top five.

Enduro3 victory for Guarneri, Verona and Ruprecht top Enduro1 and Enduro2
Beginning to make Enduro1 his own, Verona secured his fourth victory of the season. Oldrati fended off a late charge from Espinasse to claim the runner-up result by seven seconds.

In their battle for overall supremacy, Ruprecht and Garcia again ruled the roost in Enduro2. This time, Ruprecht topped the podium, with Garcia second. Making a welcome return to the top three, Salvini took third by six seconds from Nathan Watson (Honda).

A new winner emerged in Enduro3 with Fantic’s Davide Guarneri claiming a memorable win. In what is his 22nd year of world championship level competition, the Italian proved he’s just as competitive as ever. Delivering his strongest ride of the season to date, Persson placed second and looks like a rider to watch for at round three. Frenchman Antoine Basset (Beta) was third, netting his first podium result of the championship to date.

No stopping Zach Pichon in Juniors
Team Sherco CH Racing’s Zach Pichon has established himself as the rider to beat in the Enduro Junior class, claiming yet another convincing win on day two at the GP of Portugal. The Frenchman placed over 51 seconds clear of Beta’s Luc Fargier. Fantic’s Jed Etchells completed the top three.

After knocking on the door during the previous three days, Samuli Puhakainen (TM) made it fourth time lucky to win the Youth class. A great ride from the Finnish rider saw him claim a 41 second margin of victory over Harry Edmondson (Fantic) and Kevin Cristino (Fantic).

After two exciting back-to-back rounds to start the season, the WPTGlobal FIM EnduroGP World Championship continues with round three in Italy on June 24-26.

Wil Ruprecht (TM):
“It’s been an awesome weekend going 1-1. Conditions were dry, dusty, and proper tough. I’m pleased with myself to have ridden maturely and strong on both days – it was a fine line between pushing hard and ushing too hard and crashing. We’ve got a few weeks to go until round three and motivation is high to keep this rhythm going.”

Josep Garcia (KTM):
“Overall it’s been a solid weekend finishing second each day. I wanted to fight more for the win today, but I just wasn’t able to make it happen. I couldn’t get the better of that Enduro Test. I’ll try to work on that and be stronger next time out in Italy.”

Andrea Verona (GASGAS):
“Third both days is really nice and first in Enduro1 is great. I felt like I improved during the weekend on what were tough special tests. It’s my home GP next in Italy – I’m excited for that!”

Zach Pichon (Sherco):
“Overall, it’s been a great weekend with wins on both days and a lot of space between me and the second placed rider. Despite the rain at the start on Saturday I was able to have some good times on the Enduro test, so I could open up an advantage in my class. I lost a little time on the Extreme Test, but overall day one was good. Sunday was super rough conditions but it went well.”

Championship Standings (After round 2 of 7) – EnduroGP: