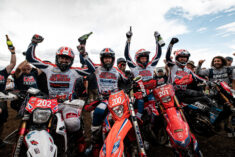 In a dramatic turn of fortune, Italy clinched the vice-champion position in the final moments of the Final Cross Test. With team leader Andrea Verona (GASGAS) winning Day Six, the Italians beat Spain to the runner-up result by an incredible five tenths of one second after almost thirteen hours of racing, over six days.

Entering the sixth and final day of racing on the cusp of victory, Great Britain faced a nervous wait for their turn to race the Final Cross Test, late this afternoon. With a four minute and twenty-two second lead over closest rivals Spain, they were all but assured of a World Trophy victory, but still needed a trouble-free ride to claim the win.

With all four riders – Nathan Watson (Honda), Steve Holcombe (Beta), Jamie McCanney (Husqvarna), and Jed Etchells (Fantic) – contesting the final race of the day, everyone held their collective breath as the start gate dropped. Safely through lap one inside the top twenty, they settled into the race.

After eleven nerve-wracking laps, all four riders were home and dry and the celebrations could finally begin, Great Britain were now FIM ISDE World Trophy champions.

“It is an incredible feeling to win the FIM ISDE,” told Great Britain’s Nathan Watson (Honda). “It’s a long time since 1953 when Great Britain last won, so it is a big honour for us to do it.

“We prepared well, came with a strong team and got the job done. We were consistent all week, winning multiple days and being there when it counts.

“We’re massively proud of what we achieved today. It’s a real team effort both on and off the track to get this result. So, a big thank you to everyone supporting us along the way!”

With Great Britain, Italy, and Spain completing this year’s FIM ISDE World Trophy podium, it was host nation France who took fourth, with the United States in fifth.

With the ninety-sixth edition of the FIM ISDE complete in France, attention will soon turn to the ninety-seventh edition in San Juan, Argentina in November 2023.