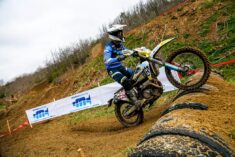 The last round of the Borilli Enduro European Championship 2022 is getting closer and will see the coronation of the European champions at its conclusion; no titles have been awarded yet; for this reason every single special test will be crucial. All classes see their riders at a handful of points from each other; therefore, a last Round fought to the last corner is announced.

The Enduro European Championship 4th Round will take place on Saturday 29th and Sunday 30th of October in the German town of Rudersdorf, located a few kilometres from the capital Berlin. A conclusive act that will consist of 3 special tests placed within a circuit of about 60 km. A few metres from the paddock will be located the 24MX Extreme Test which will give a remarkable show thanks to its obstacles; the Airoh Cross Test, with its sandy bottom and its length of 4km, will be the second test to be tackled while the Eleveit Enduro Test, traced within an undergrowth full of stones and roots, will close the lap. The Cross Test and Enduro Test are also located near the paddock, both about 10 minutes away.

In addition to the special tests, the organisation plans to set up a tight Timecheck; a transfer part between two time controls will see the time, made available for its journey, decrease as the laps pass. Those that await us on German soil will be two days of intense competition and up to the previous Rounds, which have been characterised by a high technical level and variety of tracks.

The Rudersdorf stage, valid as championship’s seventh and eighth day, will be named after the well-known Italian brand Airoh by Antonio Locatelli, taking the name Enduro European Championship Borilli Racing – Airoh Round 4#. In addition to the title of the stage, the Airoh brand will be the protagonist, as in the other rounds of the season, of the Airoh Cross Test Trophy, it will proclaim right in Rudersdorf the best rider of the Championship; currently the leader of this important ranking is Erik Willems, who leads the ranking with 103 points, with the 87 of Nicola Recchia and the 75 of Damiaens Dietger.

In addition to the leadership of the Airoh Trophy, Willems is also in charge of the Eleveit Enduro Test Trophy, the trophy set up by Eleveit that will award the fastest rider within the Enduro Test. Willems is in first place in the Eleveit Trophy thanks to the 80 points earned so far. Behind him Dan Mundell with only six points of detachment and Damiaens Dietger, third with 66 points.

LEAGUE SITUATION BEFORE THE LAST ROUND
Thanks to the ability to be versatile, complete and able to express himself best in every special event, Erik Willems is the 24MX leader of the overall championship standings; the strong Belgian rider is in charge of the general standings with 100 points. Behind him the talented Dan Mundell who occupies second position with 79 points as the podium is closed by strong Damiaens Dietger, third at 67 points.

In Women class the English Nieve Holmes remains firmly in charge of the championship standing and could already win the title on Saturday. Despite the excellent performance in Finland, Vilde Marie Holt is currently quite distanced from leader Holmes. 24 points separate the two girls. The third position is French Marine Lemoine’s prerogative, who is 3 points behind Holt.

The Senior’s first position is still in the hands of Alessandro Rizza with Martin Gottvald second and Christoph Lessing third. Even Rizza could celebrate the continental title already on Day1!

In E1 Maurizio Micheluz is still leading the games with 111 points; the Italian, who has already won 13 European titles, at the moment is in front of his compatriot Federico Aresi, who is in second place with 97 points, and Dawid Babicz, third at 73 points.

Erik Willems, in addition to the leadership in overall standing, is also in first place in E2; Nicola Recchia has tried several times to hook the Belgian, managing to win on day2 in Hungary. He is currently in second place at 14 points off. Giuliano Mancuso, after the Finnish round, climbed the class rankings and ranked third, demonstrating how everything is possible and that the games are anything but closed.

After Sipoo’s stage on July 23rd-24th, the E3 class saw a change of leadership; Damiaens Dietger managed to overtake Englishman Dan Mundell, the protagonist of a Finnish day1 to be forgotten, after a fall inside the first special test, he had to withdraw. There are 4 points that separate Dietger from Mundell. At a single point of detachment from second position we find David Abgrall (3rd). A really hard-fought class; the championship is more open than ever!

The Junior 1 standings remained fairly balanced over the course of the season; Carlo Minot continues to be the leader, followed by Simone Cristini and Killian Lunier. The three have 111, 97 and 90 points respectively.

Lorenzo Bernini, with his 97 points, is first in the Junior 2 standings; Yuri Quarti (79 pt), after the Finnish stage, advanced one position and landed on the second step of the podium by relegating the talented Zdenek Pitel (69 pt) to the third class position.

The Youth class currently sees as the best driver the Italian Manuel Verzeroli with 104 points, 5 more than the Frenchman Clement Clauzier, who, thanks to the two Finnish victories, managed to overtake Daniele Delbono and appropriate the second position. The young Italian, missed the third round due to a bad injury, he now, occupies third place with 67 points.

In the ranking reserved for teams, a situation of equal points relegates the formations of Diligenti Racing and Lago d’Iseo to the first place with 111 points before the final rush. Behind them we find the Sebino with 77 lengths.

Rudersdorf is therefore going to be an intense weekend, which we are ready to tell you live on our social channels Instagram and Facebook! And of course we are waiting for you numerous on board special to support our riders at the start.

We remember that, in addition to the Enduro European Championship, the European Championship of Nations will also be on the scene in Germany. The representatives of the various nations that will compete to win the European title are also on the start. Last year’s winning team was the Czech Republic’s delegations, with France winning in the Women and Junior categories and Germany dominating in the Senior class. Among the clubs of the nations, it was Diligenti Racing that triumphed in 2021.

Who will be the best Nations this year?

While we wait to discover the national teams deployed for the European Nations stay with us, consult the official website of the event (https://www.enduroeuropean.com/) and our Instagram and Facebook pages!