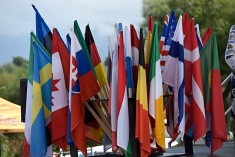 There is no doubt about it, the 91st edition of the FIM International Six Days Enduro (ISDE) that will be held at the Circuito Navarra, Spain from Tuesday 11 October to Sunday 16 October 2016 looks set to be a great occasion with the permanent motorsports facilities offering a great focus to the latest coming of this historic event.

Preliminary entries to become a part of the 2016 ISDE are already open, but are set to close on Monday 29 February so make sure you submit your entry today. Registration is available on the official event website
More details on the official Website
Over the coming months we will bring you all the latest news regarding the 2016 ISDE, in the meantime we would like to share the following key information.