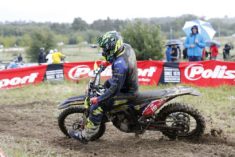 VIDEO. Claiming his second EnduroGP class win of the 2016 season, Tasmanian Matt PHILLIPS (Sherco) moved ahead of Frenchman Mathias BELLINO on the event’s final and closing Extreme Test to claim victory on day one of the GP of Portugal in Gouveia. With just over three seconds separating the two riders third in EnduroGP went to Enduro 3 class winner Steve HOLCOMBE (Beta).

Day one in Gouveia proved to be a brutal one. With weeks of rain falling on the course, the soft Portuguese terrain soon became extremely cut up with parts of both the transfer sections and the special tests all but impassable. With the day reduced to two laps from three, all three special tests were altered in order to keep the event running.

Continuing their battle that started at the championship opener in Morocco, BELLINO and PHILLIPS ended the day comfortably ahead. But for much of the race senior class rookie Steve HOLCOMBE looked poised to challenge for the win. Entering the final test of the day BELLINO, PHILLIPS and HOLCOMBE were all well placed to win, but mistakes by HOLCOMBE stopped him finishing higher than third. “It all came down to the last extreme test and I went for it,” explained PHILLIPS after the race. “It was pretty much a battle ground so I took some completely different lines and gave it everything, and it worked. It’s great to get on top of the podium in these conditions. It was a tough day for everyone. Day two’s going to be interesting.”

Despite competing on the unfamiliar terrain for the first time ever, Taylor ROBERT (KTM)placed just seven seconds off the EnduroGP podium having again put in a solid day-long performance. Frenchman Antoine BASSET placed fifth with Alex Salvini sixth.

Placing in seventh in the overall EnduroGP results Finn Eero REMES (TM) claimed another Enduro 1 class win, placing 34 seconds ahead of his closest rival. Despite making a slow start to the day, Eero went on to win the second, third and fourth special tests to establish himself at the head of the class. Using his experience to ensure a trouble free ride to the finish, he secured a deserved win. British duo of Jamie MCCANNEY (Yamaha) and Nathan WATSON (KTM) placed second and third respectively. For Jamie the day ended having made next to no mistakes. For Watson it was a very different story. Putting in a strong opening lap the EnduroGP rookie parted company with his bike on more than one occasion to end his day 18 seconds behind Jamie. Kawasaki mounted Italian Gianluca MARTINI again performed well to place fourth with Rudy MORONI (KTM) and Danny MCCANNEY (Husqvarna) rounding out the top six in Enduro 1.

In finishing first and second at the top of the EnduroGP classification, Matt PHILLIPS and Mathias BELLINO also took the top two spots in Enduro 2. Taylor ROBERT earned himself a career first podium result in third, finishing 15 seconds ahead of fourth placed Alex SALVINI (Beta) who crashed on the closing Extreme Test. Yamaha duo Cristobal GUERRERO andLoic LARRIEU rounded out the top six.

In the Enduro 3 class Steve HOLCOMBE was clearly enjoying himself in the muddy conditions, winning five special tests on his way to the class win. Close to nine seconds ahead of runner-up Antoine BASSET (KTM), HOLCOMBE’s troubled run through the final Extreme Test wasn’t enough to stop him from claiming his second day win of the championship thus far.Antoine BASSET again delivered an impressive set of special tests results, ending the day as arguably the most consistent rider in Enduro 3. A little under nine seconds behind HOLCOMBE, the Frenchman placed some 44 seconds ahead of Johnny AUBERT (Beta). Spaniard Jaume BETRIU (KTM) and Italians Manuel MONNI (TM) and Thomas OLDRATI (Husqvarna) rounded out the top six. “I thought I’d blown it on the final extreme test,” admitted HOLCOMBE. “I made a number of mistakes, but they effected my overall result more than the Enduro 3 result. It was a difficult day but I enjoyed it. It’s amazing how different the conditions are to 12 months ago.”

Giacomo REDONDI (Honda) comfortably topped the Enduro Junior class results placing more than one-minute ahead of Portuguese rider Diogo VENTURA (Gas Gas). Despite only topping three of the day’s special tests, REDONDI kept his mistakes to a minimum while his classmates saw mistakes effect their results. Spain’s Josep GARCIA (Husqvarna) saw his day end in the worst possible way when he lost close to two minutes in the final Extreme Test.