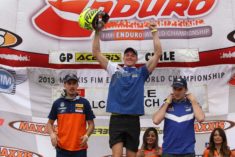 After the return of Matti SEISTOLA (SF – Yamaha) at the Grand Prix of Finland and Robert KVARNSTROM (S – Yamaha) standing in for Jamie MCCANNEY (GB – Yamaha), a new comeback is on the horizon for the Maxxis Grand Prix of Sweden… Joakim LJUNGGREN (S)!

Absent from EnduroGP since 2014, the double Junior World Champion (2006-2007) could not resist making a return for his home Grand Prix! LJUNGGREN, who was long considered the number one rider of the Husaberg factory team managed byThomas GUSTAVSSON, will be heading a huge contingent of Swedish riders (37!).
Now a multiple Swedish Champion and current leader in the E2 class of the national series, LJUNGGREN will take on the stars of the EnduroGP riding with a KTM 500 4 stroke in E3. Adding extra excitement as it has been a long time since we have seen a big 4-stroke at a GP!

Even though he no longer participates in the entire World Championship, “Jocke” could still surprise a few people and possibly shake up the hierarchy in Enduro 3, currently led by the Beta Boys Steve HOLCOMBE (GB) and Johnny AUBERT (F)… It will in any case, be a real pleasure to see the Swedish giant and his 500 4-stroke in the paddock!