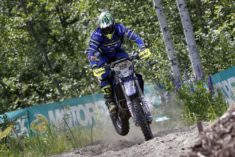 Kept from the top step of the EnduroGP podium on day one by Eero REMES (TM), on day two of the GP of Finland it was Matt PHILLIPS who topped the results after the Tasmanian ace blasted his way to an eventual nine seconds winning advantage. With little to separate REMES, PHILLIPS and Nathan WATSON (KTM) throughout the day, it was PHILLIPS who best matched speed with consistency to earn his third outright day win of the championship so far.

In claiming the win PHILLIPS moves back to the top of the standings, tied on points with REMES. Third, but now a distant third following a bike issue during the second day, Steve HOLCOMBE (Beta) sits six points ahead of Mathias BELLINO (Husqvarna) with KTM duo of Nathan WATSON and Taylor ROBERT fifth and sixth.

In the Enduro 1 class it was again REMES and WATSON who dominated the proceedings. Separated by little throughout the day, with just seconds separating them on most special tests it was clear the rider who made the least mistakes would win. That rider was REMES. With WATSON wanting to claim his first day win of the series the young Brit pushed a little too, made one or two small but costly mistakes, and had to settle for second.

For REMES a strong end to the day saw the TM star claim his eighth victory of the season. “I was feeling a little stiff in the morning,” explained the Finn. “The enduro test was really difficult so it was hard to find the good rhythm. Nathan was fast so I hard to push hard during the final lap.”

Behind REMES and WATSON, Danny MCCANNEY claimed his first podium result of the series in third. The Husqvarna rider placed behind his team-mate Pascal RAUCHENECKER on day one but turned the tables on day two to finish 35 seconds ahead. Ivan CERVANTES (KTM) placed fifth ahead of Victor GUERRERO (KTM) with Finn Matti SEISTOLA ending the day on seventh and having thoughrougly enjoyed his return to world championship competition.

As the overall EnduroGP winner Matt PHILLIPS enjoyed a comfortable winning margin in Enduro 2. Close to one-minute ahead of his closest challenger Mathias BELLINO, PHILLIPS delivered one of the day’s strongest performances aboard his Sherco. “REMES and WATSON were pushing me hard for the overall win, which helped me get ahead in the Enduro 2 class. The day was difficult but I just kept pushing and pushing. It was a great day, a really good way to finish the GP of Finland.”

With BELLINO finishing as runner-up it was Italian Alex SALVINI (Beta) who rounded out the podium. A little under nine seconds behind the Frenchman, Alex’s podium visit was his first since the GP of Portugal. Frenchman Loic LARRIEU (Yamaha) rode a steady race following his crash on day one to earn fourth with Taylor ROBERT (KTM) fifth.

Johnny AUBERT (Beta) overcame a near disastrous opening motocross test to win the Enduro 3 class, helped by his team-mate Steve HOLCOMBE suffering a technical issue mid-way through the day. AUBERT would eventually finish close to eight seconds ahead of Spaniard Jaume BETRIU (KTM) with Antoine BASSET (KTM) third. Picking up a five-minute time penalty, HOLCOMBE could place no higher than eighth in class. Prior to his problem Steve was challenging for the overall win, and still maintains his lead in the E3 championship standings.  “My day started in a bad way with a big mistake on the first motocross test,” explained AUBERT. “I thought it was going to be a difficult day then. But I managed to get the win, which I would never have expected. It wasn’t good that Steve had a problem, but it helped me. The rest of my day was ok. But it was a hard day.”

In a class of his own in the Enduro Junior category Giacomo REDONDI (Honda) topped all but two special tests to claim an eventual winning advantage of one-and-a-half minutes. With Josep GARCIA (Husqvarna) unable to finish having injured his knee, Sweden’s Albin ELOWSON (Husqvarna) claimed the runner-up position ahead of Eemil POHOJOLA (Husqvarna). REDONDI now sits 58 points ahead in the EJ championship standings.

Jack EDMONDSON (KTM) was another rider to match his day one victory with a win on day two. Close to one-minute ahead of France’s Jean-Baptiste NICOLOT (Yamaha), Jack gained valuable championship points having missed round two with injury. Antti HANNINEN (Husqvarna) rounded out the podium after finishing less then one-second behind NICOLOT.

Day two of the GP of Finland proved to be every bit as challenging as riders feared it would be. With fine weather throughout the day, the event’s enduro test was once again the place where time was won and lost. Tougher, with more exposed rocks and tree roots that on day one, it certainly sorted the men from the boys. Day two also saw a number of notable retirements. Christophe NAMBOTIN called it a day early on, not fit enough for such tough conditions following the hand injury he sustained at the GP of Morocco.

The EnduroGP series now heads to Sweden, where round five of the 2016 championship will take place in Enkoping.