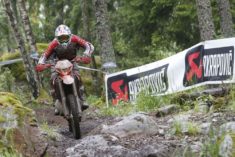 Steve HOLCOMBE (Beta) has claimed his second overall EnduroGP winning result of the 2016 season, battling to a hard-fought victory on day one of the GP of Sweden in Enkoping. Putting his disappointing day two result at last weekend’s GP of Finland well and truly behind him he finished one-minute ahead of overall runner-up Matt PHILLIPS  (Sherco). Third in EnduroGP went to Eero REMES (TM).

With heavy rain falling throughout the night prior to the first day of competition in Enkoping, further rain during the day resulted in a very long, wet and physically demanding seven hours in the saddle. But for HOLCOMBE the day ended in the best possible way – with the senior class rookie having not made any serious mistakes on any of the nine special tests.

Winning each of the three enduro tests was key to Steve’s overall podium topping result. While just about every other rider made mistakes on the long and technical forest based enduro test at some point during the day, Steve managed to remain mistake free to claim his significant margin of victory. “It was a difficult day, but I managed to stay upright and I think that was the key to my result,” explained HOLCOMBE. “I knew the enduro test was going to be where the day would be won or lost so I pushed hard there and things went well. The conditions were tough, but I enjoyed the day.”

While HOLCOMBE ended the day with a one-minute advantage over Matt PHILLIPS, the Tasmanian had his work cut out staying ahead of Eero REMES. Yet despite hitting a rock and breaking his rear brake pedal and right footpeg that’s what PHILLIPS managed to do. Keeping REMES honest was Nathan WATSON (KTM), with the young Brit finishing just 14 seconds behind in fourth. Frenchman Antoine BASSET (KTM) put in a solid day to round out the top five in the overall EnduroGP results while Johnny AUBERT (Beta), Taylor ROBERT (KTM) and Loic LARRIEU (Yamaha) finished sixth, seventh and eight respectively.

As the event’s outright fastest rider Steve HOLCOMBE comfortably topped the Enduro 3 class. Finishing one-and-a-half minutes ahead of Antoine BASSET, together with third placed Johnny AUBERT the three riders topped all tests in E3. The difference between BASSET and AUBERT at the end of more than one-hour of special test racing was less than three seconds. Romain DUMONTIER (Yamaha), Jonathan BARRAGAN (Gas Gas) and Luis CORREIA (Beta) rounded out the top six.

Matt PHILLIPS endured a tough day, yet came out on top in the Enduro 2 class aboard his Sherco. Clipping a rock in the extreme test the former Enduro 3 World Champion broke both his rear brake lever and right footpeg and was forced to ride the second motocross special test before fixing his bike. Despite the problem PHILLIPS was a class above in E2 and close to one-minute faster than runner-up Taylor ROBERT (KTM). “That was a tough one,” explained PHILLIPS as he exited the parc ferme. “I crashed in the first enduro test and lost around 20 second, tried to pull it back in the second enduro test and made another mistake and then lost my brake lever and foot peg in the second extreme test. To get the E2 win after all that is great.”

Just as in the Enduro 3 class things were extremely close between the second and third placed riders in Enduro 2. Despite being beaten by Loic LARRIEU (Yamaha) on the final motocross test Taylor did enough to claim the runner-up result finishing three-and-a-half seconds up on the Frenchman. Mathias BELLINO (Husqvarna) placed fourth with Cristobal GUERRERO (Yamaha) fifth and Christophe NAMBOTIN (KTM) sixth.

Claiming his ninth day win of the series Eero REMES managed to keep Nathan WATSON behind him once again, despite crashing twice on the second enduro test. Losing more than 20 seconds to WATSON on that one test alone, the experienced Finn kept his cool and fought hard to keep his perfect season going. “It all went ok for me apart form the second enduro test,” commented REMES. “I crashed and twisted my bike but I stayed ahead of Watson and got the win again.” Again the only rider to match REMES’ pace, WATSON placed two-and-a-half minutes ahead of third place Danny MCCANNEY (Husqvarna). Danny in turn finished 45 seconds ahead of his Husqvarna team-mate Pascal RAUCHENECKER.  Seemingly unaffected by his huge super test crash, Gianluca MARTINI rode his Kawasaki to fifth with Rudy MORONI (KTM) sixth.

Giacomo REDONDI (Honda) once again topped the Enduro Junior class, finishing more than one-and-a-half minutes ahead of Albin ELOWSON (Husqvarna). Never placing lower than second in class, Giacomo, like REMES in Enduro 1, is so far unbeaten in 2016. Third went to Diogo VENTURA on his Gas Gas.

Jane DANIELS (Husqvarna) extended her position at the top of the Women’s championship standings by claiming victory on day one in Enkoping. Making it three wins from three days of competition, Jane placed ahead of Germany’s Maria FRANKE (KTM) with Laia SANZ (KTM) third