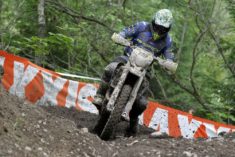 Steve HOLCOMBE (Beta) put the finishing touches to a perfect weekend at round five of the Enduro World Championship by topping the overall EnduroGP results on day two of the GP Maxxis of Sweden in Enkoping. After finishing comfortably ahead at the end of day one, the young British rider was made to work hard for his victory on day two, eventually placing just three seconds ahead of Matt PHILLIPS (Sherco) with Johnny AUBERT (Beta) a strong third.
Thankfully the rain that poured throughout the opening day’s racing in Enkoping was replaced by largely clear skies and dry conditions. But while conditions overhead were vastly improved the damage done to the track on day one resulted in another hugely physical day’s racing.

Topping the overall results HOLCOMBE was the rider to beat on four of the opening five special tests on day two but then crashed twice in the third and last enduro test to make things extremely tight at the top of the results. With both PHILLIPS and AUBERT giving their all in the hope of preventing Steve from securing the win, as it turned out less than five seconds separated the three riders after more than one-hour of racing.

“The conditions were drier but every bit as difficult as they were on the first day with the ruts, tree roots, rocks and stones,” explained Steve. “Everything was going great right up until the last enduro test. I pushed just a little bit too hard and paid for it. I crashed once, picked myself up and then crashed again. So two fairly big crashes in one test. It all came down to the final motocross test then and I went for it. I did enough to get the win, and some very important championship points.”

Behind HOLCOMBE it was Matt PHILLIPS who claimed the runner-up position, just ahead of Johnny AUBERT With little to separate the duo Nathan WATSON got he closest to theEnduroGP podium on his 250f, finishing 21 seconds behind AUBERT.

Claiming his first class win of the series and in doing so stopping Eero REMES‘ run of victories at the top of the Enduro 1 class, Nathan WATSON (KTM) delivered a hugely impressive performance on day two. While it was WATSON that set the pace early on WATSON soon found his form despite a big crash on the enduro test. “Day two was hard work,” explained Nathan. “But despite a pretty big crash in the log section in the enduro test I’m so pleased to get my first Enduro 1 class win. Winning has certainly made the tough weekend worthwhile.”

With REMES the E1 class runner-up it was Pascal RAUCHENECKER who eventually placed third, close to two-minutes behind the Finn. Danny MCCANNEY held third for much of the early part of the day but clipped a rock on his Husqvarna in the extreme test and bent his rear sprocket. Losing a huge amount of time he nevertheless managed to finish the day. Ivan CERVANTES (KTM) finished less than one-second behind RAUCHENECKER with Swede Mikael PERSSON (Yamaha) fifth.

Finishing comfortably ahead in the Enduro 2 class Matt PHILLIPS distanced himself from all other Enduro 2 class riders, claiming his seventh class win of the season to date. Behind PHILLIPS there was little to separate the next four riders, withTaylor ROBERT (KTM) eventually claiming the runner-up result ahead of Cristobal GUERRERO (Yamaha).  Less than three seconds behind ROBERT, Cristobal GUERRERO (Yamaha) setted his best result of the year so far in third. Mathias BELLINO (Husqvarna) saw his day end with a crash on the final motocross test, dropping him down the results to fourth.

“It was a long, tiring day today,” admitted PHILLIPS at the finish. “I have to say it was another great team effort from the CH Racing Sherco guys. It was also really cool to race to the end with Steve for the overall, with just a few seconds between us going into the final test. He got me for the overall but it was important to get another E2 class win.”

As the event’s outright fastest rider Steve HOLCOMBE finished at the top of the E3 class results, but less than four seconds ahead of team-mate Johnny AUBERT. With both riders on top of their game throughout the day, HOLCOMBE’s mistake ensured everything was to play for during the closing special stages. Despite AUBERT topping the final two tests HOLCOMBE picked up the win. Rounding out the E3 podium was Manuel MONNI (TM) who placed close to half a minute ahead of Antoine BASSET (KTM) with Jonathan BARRAGAN (Gas Gas) and Joakim LJUNGGREN (KTM) rounding out the top six.

Giacomo REDONDI (Honda) took another step towards claiming the 2016 Enduro Junior title on day two in Sweden claiming his 10th class win of the series and placing more than one-minute ahead of second placed Albin ELOWSON (Husqvarna). Just 14 seconds behind ELOWSON, TM mounted Henric STIGELL claimed his first podium result of the season having steadily improved since round one in Morocco. Only eight seconds behind STIGELL, Davide SORECA (Honda) placed fourth with Diogo VENTURA (Gas Gas) and Oliver NELSON (TM) fifth and sixth.

In the Women’s class Laia SANZ (KTM) claimed her first win of the championship, finding her form around the challenging special tests. Finishing 30 seconds clear of her closest challenger it was Germany’s Maria FRANKE (KTM) who finished second with day one winner Jane DANIELS (Husqvarna) third.

Jack EDMONDSON enjoyed a sizeable winning margin in the 125cc Enduro Youth class, winning each of the day’s nine special tests. With it the young Brit moved himself to the top of the championship standings following the DNF of Jean-Baptiste NICOLOT (Yamaha). Runner-up on day two went to Sweden’s Joakim GRELSSON (KTM) with Lee SEALEY (Yamaha) third.

Round six of the 2016 EnduroGP series takes places in Gordexola, Spain on July 2-3.