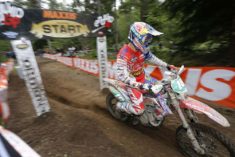 Tough Enduro Expected!
Following on from the recent Scandinavian events it’s onwards and upwards for the stars of the FIM EnduroGP World Championship as the series heads to Gordexola in the Basque Country, Spain for the sixth GP of the year.

Absent from the series for four years, it was the Gernika Off Road Club who last welcomed the championship to the Northern region of Spain back in 2012. But now it’s the turn of the Moto Club Aiala to welcome the return of the EnduroGP. Supported by the Real Federacion Motociclismo Espanola (RFME), this Moto Club, chaired by Imanol TARAMONA has for a decade organised a very popular Extreme Enduro in Gordexola and its surroundings.

The Moto Club Aiala has laid out a 65-kilometer route between the villages of Gordexola, Zalla and Guenes. Riders will leave Gordexola and directly face the Enduro Test. Then they will head to Zalla and the Technomousse Xtreme Test. Before that, they will have two Time Checks (without service), one of which likely to be very tight on time. Riders will then transfer to Guenes where they will enter the final test of the lap, the Maxxis Cross Test.

Gordexola, Zalla and Guenes are three picturesque villages of Biscay province in the center of the Spanish Basque country, with only 20,000 inhabitants. Located just 17 kilometres from Bilbao, these three villages have everything to ensure a fantastic enduro event.

The Grand Prix AMV Seguros of Euskadi will starts on Friday, July 1st at 20.00 with the traditional Super Test where many Basque, Spanish and French spectators are expected.

HOLCOMBE – the fantastic comeback!
After receiving a five-minute penalty on day two at the Grand Prix of Finland, Steve HOLCOMBE’s (GB – Beta) EnduroGP title chances seemed very much compromised. But a huge double win in Sweden allowed him to close the gap to leader Matthew PHILLIPS (AUS – Sherco) to just 21 points. For Holcombe, the Grand Prix AMV Seguros of Euskadi will be hugely important. He will absolutely have to keep his two rivals – PHILLIPS and Eero REMES (SF – TM) – behind him if he is to secure maximum points and get closer to the coveted #1 plate.
But PHILLIPS, who was extremely constant during the Scandinavian tour, is in a strong position and will seek to control the advances of both the young Brit and the experienced Finn. For his part, REMES, who is only eight points behind the Australian, failed to win E1 class for the first time this season, in Sweden. He will seek to leave the Basque Country with the leader board under his arm…
The three-way fight at the top of the EnduroGP series will likely see another rider’s performances effect the final outcome. Nathan WATSON (GB – KTM) has impressed at every round of the series so far with the enduro rookie finally beating REMES in Sweden. Consolidating his position at the head of E1 is WATSON’s primary goal, but it might not be long before we see the youngster at the top of the EnduroGP podium too!
American Taylor ROBERT (KTM) and the double World Champion Johnny AUBERT (F – Beta) both have what it takes to have a very serious impact on the head of the EnduroGPresults.
Mathias BELLINO (F – Husqvarna), who currently sits fifth in the provisional standings, could also be considered in this category if his injured knee allows him to run at 100%.

In addition Loïc LARRIEU (F – Yamaha) is determined to improve his EnduroGP results and enter the top five. Antoine BASSET (F – KTM), who never fails to surprise, will again be looking to show the factory teams and their riders what he’s capable of. We are still waiting to see more from Alex SALVINI (I – Beta) who so far hasn’t delivered the form many expected of him pre-season. Note also the return of the 2011 Junior World Champion Jeremy JOLY (FRA – KTM) who will compete in Enduro3.
The Spaniards Jaume BETRIU (KTM), Cristobal GUERRERO (Yamaha), Ivan CERVANTES (KTM), Jonathan BARRAGAN (Gas Gas) and Victor GUERRERO (KTM) will all be trying to score valuable EnduroGP points in front of their home fans while Lorenzo SANTOLINO (Sherco) will hope to see an end to his bad luck and injuries and fight among the best.

Will REDONDI and EDMONDSON continue their momentum?
Due to a crash during the Grand Prix of Finland, Spanish prodigy Josep GARCIA (Husqvarna) was forced to sit out the GP of Sweden with an injured knee. Doing all he can to be ready to return to competition GARCIA is hopeful of competing in his home round of the series and once again trying to challenge EJ class leader Giacomo REDONDI (I – Honda).
Launching what has been a full and successful assault on the Enduro Junior title it seems increasingly unlikely that any rider will be able to challenge REDONDI as he heads towards a first EJ crown. If Albin ELOWSON (S – Husqvarna), Diogo VENTURA (P – Gas Gas) or Davide SORECA (I – Honda) stand strong REDONDI might have to work harder than at any previous GP, but on current form it’s hard to see where his closest challenge will come from.
On the Spanish side, we will not forget the participation of Jordi QUER or Sergi CASANY who want to shine in front of their audience. Something new at this Grand Prix AMV Seguros of Euskadi is the arrival of the young Brazilian Bruno CRIVILIN (KTM) who will try his hand ahead of a possible full season in 2017.

In the FIM Youth Cup Jack EDMONDSON (GB – KTM) took control at the head of the category with a perfect tour of 4 wins from 4 starts in Finland and Sweden, helped by the DNF of French rider Jean-Baptiste NICOLOT (Yamaha) on Sunday in Enköping. If NICOLOT, Erik APPELQVIST (S – Yamaha), Lee SEALEY (GB – Yamaha) and Anti HANNINEN (FIN – KTM) don’t want to see “Jacko” fly to the title they will have to up their games in Gordexola.

SANZ home
In the Women’s Cup it’s Jane DANIELS (GB – Husqvarna) who, to the surprise of many, leads the championship following strong performances during the opening two rounds. Eight points ahead of Laia SANZ (ESP – KTM) and a further nine ahead of the German Maria FRANKE (D – KTM), Jane will be well aware that the Grand Prix AMV Seguros of Euskadiwill be a tough and highly important one. Showing that’s she’s improved following a winter of hard training, Jane will be determined to stay ahead. But that means staying ahead of both SANZ and the quick learning FRANKE.

With SANZ improving during the Finnish and Swedish events, competing on home soil will be a huge boost for the defending class champion as the Women’s championship starts its second half. But we can’t forget that Sanna KÄRKKÄINEN (FIN – KTM) claimed four brilliant fourth place results in Finland and Sweden and will be on the lookout for the slightest mistake made by Jemma WILSON (AUS – Yamaha), who was somewhat troubled in Northern Europe and will be looking for better in Gordexola. Also competing will be Spanish riders Mireia BADIA (Husqvarna) and Rosa ROMERO (KTM) or two REIMANDER sisters (S).

Undoubtedly, thousands of Spaniards and French fans will come to the different special tests at the Grand Prix AMV Seguros of Euskadi to encourage the World Enduro Championship’s elite. And we’re willing to bet that the Moto Club Aialawill gather all the conditions to make this sixth round of the season a big celebration in the heart of the Basque Country!