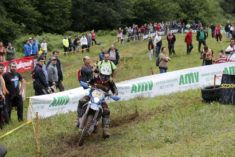 Husqvarna mounted Frenchman Mathias BELLINO bounced back from his disappointing results at the recent GP of Sweden to claim a well-deserved win on day one of the GP AMV Seguros of Euskadi, Spain. Finishing an eventual 25 seconds ahead of his closest challenger at the end of another tough day of EnduroGP competition, the former Enduro 3 World Champion claimed his first win since topping the opening day of the series in Morocco.

With EnduroGP front runners Steve HOLCOMBE (Beta) and Eero REMES (TM) both having tough days it was Alex SALVINI who claimed the overall runner-up result aboard his Beta. Injecting some excitement into the top of the EnduroGP results Italian Manuel MONNI (TM) delivered a year’s best performance to place third with Nathan WATSON (KTM) once again delivering a strong result for fourth. EnduroGP championship leader Matt PHILLIPS ended day one in Gordexola in fifth. “It’s been a really good day for me,” commented BELLINO, having struggled during the GP of Sweden. “I felt good during the day and really enjoyed the motocross and extreme tests. Luckily the rain didn’t make things too slippery so I was able to push hard. I hope day two will go well like day one has.”

In the Enduro 1 class KTM’s Nathan WATSON continued his good form, topping the class by 38 seconds. Winning seven of the day’s special tests the British youngster took control of the class lead early in the day and never faltered.  Claiming the runner-up spot for the first time this season Danny MCCANNEY delivered a much-improved result, helped by a winning performance on the final enduro test on the last lap. Seemingly finding the form that took the Manxman to the Enduro Junior World Championship title in 2014, Danny placed 13 seconds ahead of Eero REMES (TM). Starting the day well with a winning time on the opening enduro test REMES then failed to perform at his best, yet still managed another podium result. Just 22 seconds behind REMES Spaniard Victor GUERRERO (KTM) claimed his best result of the championship to date in fourth, with Rudy MORONI (KTM) and Mikael PERSSON (Yamaha) rounding out the top six.

As the event’s outright fastest rider Mathias BELLINO also topped the Enduro 2 class, followed by Alex SALVINI (Beta)and class leader Matt PHILLIPS (Sherco) third. BELLINO delivered the type of form not seen since the start of the season and remained both fast and consistent throughout the day. Also performing well Alex SALVINI ended the day having won two special tests, battling with Matt PHILLIPS for the runner-up position. With 14 seconds separating the two riders,PHILLIP’S result was hampered by an off-the-pace opening enduro test. One of the day’s stand out results came from Oriol MENA (Honda) who finished fourth, less then half a second behind third placed Matt PHILLIPS. Strong from the start of the day, MENA kept PHILLIPS honest right up until the end of the day’s closing motocross test. Yamaha’s Loic LARRIEU and Davide GUARNERI (Honda) rounded out the top six.

The Enduro 3 class was full of drama with Manuel MONNI (TM) securing his first win of the season while championship leader Steve HOLCOMBE (Beta) was struck with a technical issue that saw him plummet to the bottom of the E3 results. Adding to the drama Jeremy JOLY (KTM) came close to claiming the class win on his return to the championship, only to have a huge crash on the final motocross test and eventually place fourth. “This is a very special day for me,” admittedMONNI. “For many year’s I’ve pushed hard to get a world championship win and today I finally achieved it. It was a great day, I really enjoyed the tests and everything went well. The motocross test was great for me.” In topping the opening enduro test things looked good for HOLCOMBE, but his fortunes soon changed. Clearly struggling on the first extreme and motocross tests, at the end of the opening lap his team was forced to make much needed repairs to his bike that resulted in a 12-minute time penalty. Finishing the day Steve placed as the last finisher in E3. For most of the day it was JOLY who lead the way in E3. Competing at the back of the class due to the GP AMV Seguros of Euskadi being his first EnduroGPouting of 2016, he made the most of his advantage during the opening lap and established a strong lead. Performing well throughout the day Jeremy undid all of his good work with a huge crash on the final motocross test. Losing around 30 seconds he dropped to fourth. Third in E3 went to Jaume BETRIU (KTM) with Antoine BASSET (KTM) and Lorenzo SANTOLINO (Sherco) fifth and sixth.

Giacomo REDONDI (Honda) continued his unbeaten run of form, comfortably winning the Enduro Junior class inGordexola. Although it was Josep GARCIA (Husqvarna) who topped the opening enduro test, REDONDI quickly found his rhythm and went on to top each of the day’s remaining tests to finish more than one-minute ahead. Albin ELOWSON (Husqvarna) finished closest to REDONDI to claim the runner-up position and place ahead of GARCIA, who returned to competition after missing the GP of Sweden with a knee injury.

Laia SANZ returned to top form in Gordexola, enjoying a near perfect day. Winning all of the special tests in the Women’s class she finished more than one-and-a-half minutes ahead of runner-up Maria FRANKE (KTM). Championship leader Jane DANIELS (Husqvarna) placed third, just 10 seconds behind FRANKE. Fourth placed Sanna KARKKAINEN was the only other Woman not to pick up any time penalties.

Jack EDMONDSON (KTM) enjoyed a commanding win in the 125cc Enduro Youth class. Building a sizeable advantage during the opening two laps the EY championship leader then eased his pace with two tests to go to ensure victory. The runner-up result went to Alexis BEAUD (Husqvarna) with TM mounted Leo LE QUERE third. Injuring his wrist during Friday night’s Super Test, Erik APPELQVIST was a non-starter on day one.