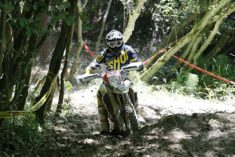 Wrapping up a near perfect weekend at the AMV GP of Euskadi in Gordexola, Mathias BELLINO (Husqvarna) was again the rider to beat in the overall EnduroGP class as the Frenchman claimed victory on day two. Repeating the form that saw him top the EnduroGP results on day one, Mathias ended Sunday’s competition close to 30 seconds ahead of FrenchmanLoic LARRIEU (Yamaha) with Nathan WATSON (KTM) rounding out the top three.

With cloudy skies soon replaced with full sun, day two saw riders face dry and largely dusty conditions. With seemingly only BELLINO  able to pull time on his rivals, competition was close at the head of all classes, with the day proving to have a sting in the tail for Finn Eero REMES. While BELLINO distanced himself form overall runner-up Loic LARRIEU by 26 seconds, just five seconds separated Loic from third placed Nathan WATSON. With both riders riding well throughout the day the pair were made to work hard by Alex SALVINI (Beta) who eventually claimed fourth overall and ended up less than two seconds behind WATSON. Matt PHILLIPS (Sherco) mixed good special test times with not so good times to finish fifth with Steve HOLCOMBE bouncing back form his day one disappointments to claim sixth.

Fastest outright aboard his Husqvarna, Mathias BELLINO also headed the Enduro 2 results to finish ahead of countrymanLoic LARRIEU. Just as he did on day one Alex SALVINI (Beta) enjoyed another strong performance to round out the E2 class podium. Matt PHILLIPS ended the day in fourth, close to 45 seconds from the wining pace of BELLINO. Retiring from day one Christophe NAMBOTIN was a non-starter on day two. “It’s great to get back to riding well and to also return to the top of the podium,” explained BELLINO. “After the races in Scandinavia I’ve really worked hard to improve and I feel like I rode well this weekend. Even if it was dry it was still a tough race. I really felt good on my bike. I took some great championship points and generally had a really good weekend.”

For Italian Manuel MONNI (TM) the second day in Gordexola didn’t end well. One of the stand out performers on day one when he secured a career first world championship victory, on day two he was handed a 30-second penalty that dropped him from the top spot of the podium to second. The rider to benefit most from MONNI’s penalty was Steve HOLCOMBE (Beta). The fastest rider on the day’s opening two tests HOLCOMBE battled hard but wasn’t quite able to match MONNI’s pace. However, in claiming the win the Brit put the disappointment of his day one technical issue behind him to secure important championship points. Johnny AUBERT (Beta) rounded out the E3 podium with Luis CORREIA (Beta) and Jaume BETRIU (KTM) fourth and fifth. “It’s never great to win when you know another rider’s been faster than you, but after the day I had on Saturday I’ll take the extra championship points I claimed today,” explained Steve. “MONNI was really fast but I felt like I rode well. For me it’s a very positive end to what was a tough weekend.”

At the top of the Enduro 1 class Nathan WATSON (KTM) repeated his day one form to claim victory, eventually finishing ahead of Husqvarna duo Danny MCCANNEY and Pascal RAUCHENECKER. Challenging WATSON for the win throughout the day, Finn Eero REMES’ saw his event end in the worst possible way when a technical issue forced him out of the race during the very last special test. Victor GUERRERO (KTM) and Ivan CERVANTES (KTM) placed fourth and fifth respectively. “I felt really tired at the start of day two.” admitted WATSON. “I made a few mistakes and lost quite a lot of time due to my mistakes but things ended really well. I was only two seconds ahead going into the final test but I got the win. I got some really good championship points, so it was a great weekend for me.”

In winning the Enduro Junior class Giacomo REDONDI (Honda) put himself in a position to become the first world champion of 2016. Claiming his 12th day win of the series, Giacomo can now secure the junior title at his home round of the championship in Italy in two weeks. Just as he did on day one Giacomo finished ahead of Swede Albin ELOWSON (Husqvarna) and Spain’s Josep GARCIA (Husqvarna).

Laia SANZ (KTM) moved herself to the head of the Women’s championship standings with a winning ride on day two. Just as she was on day one she comfortably outpaced her rivals, claiming a winning margin of more than one minute. Runner-up for the majority of the day, Jane DANIELS (Husqvarna) started the final motocross test eight seconds ahead of Germany’s Maria FRANKE (KTM) but ended the day four seconds behind to finish third. With just two points now separating SANZ and DANIELS each rider has everything to play for at the final round of the series in France.

Just as he did on day one Jack EDMONDSON (KTM) topped the 125cc Enduro Youth class on the second day’s competition in Gordexola, extending his championship advantage in the process. Enric FRANCISCO (KTM) secured the runner-up result with Lee SEALEY (Yamaha) rounding out the podium.