PHILLIPS – the man to beat! 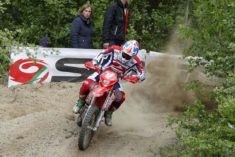 The Maxxis FIM EnduroGP World Championship continues its journey this weekend in Fabriano in the Marche for theGrand Prix Acerbis Italy. This seventh and penultimate round of the year will also mark the end of a gruelling period where riders have been tackled four rounds in just six weeks.

Last hosting a World Enduro in 2004 (Matelica), the Moto Club Artiglio of Attiggio has decided to bring back the EnduroGP to the Marches much to the delight of the Italian Enduro fans. Luca BARTOCCETTI and all the Moto Club had no trouble convincing the Federazione Italiana Motociclistica (FMI) and the FIM to organise the seventh round of the 2016 season.

Back in the Marche!

Organisers Moto Club Artiglio of Attiggio have pieced together a great 55-kilometre long course. The route will offer all the charms of the Marche region. Competitors will start in the Palasport G. Guerrieri which is on the outskirts of Fabriano. They then head to the “Caselle dalle Balze“, close to Attiggio where they face the Enduro Test. A tight Time Check will pave the way to the Maxxis Cross Test, which is also near Attiglio. Finally, Santa Maria will host the Technomousse Xtreme Test. Note that the Friday night Super Test renamed “Brema Super Test” will take place close to the paddock from 19.00 onwards.

Fabriano is a charming city of the Marche region, in the heart of Italy. A UNESCO creative city since 2013, it has over 32 000 inhabitants. Located in a valley surrounded by mountains and only 70 kilometres from the Adriatic, Fabriano was known for its important role in the manufacture of paper and watermarks in the twelfth century. A city rich in monuments from the Middle Ages and the Renaissance, it is located 74 kilometres west of Ancona and 210 kilometres from Rome.

With a busy entry of 100 competitors, the Italian Grand Prix Acerbis proves its appeal to riders and we expect that this success will be as resounding on the audience side.

The “everything goes” of REMES, HOLCOMBE and BELLINO…

At the head of the EnduroGP class, Matthew PHILLIPS (AUS – Sherco) is the man in charge. Consistently clocking up solid point scores, PHILLIPS, capitalising on the troubles of his rivals, has distanced himself in the point’s race. Now 28 points clear of Eero REMES (TM) and Steve HOLCOMBE (Beta), the Australian’s focus will be to keep that promising advantage intact.
REMES and HOLCOMBE now have nothing to lose and both riders should be even more dangerous. Joining in the race for the podium are Mathias BELLINO (F – Husqvarna) and Brit Nathan WATSON (KTM), ensures the TM and Beta riders must give their best to keep their place and take maximum points on PHILLIPS before the final.
In trouble two weeks ago Taylor ROBERT (USA – KTM) must prove that he can get on the podium of the EnduroGP. Especially as he must consolidates his position with the return to form of Loïc LARRIEU (F – Yamaha) and Alex SALVINI (I – Beta).
Johnny AUBERT (F – Beta) proved he still has the speed and consistency to play the first places and always delivers in Italy.
On form and on home turf, Manuel MONNI (I – TM) is a rider to watch. Danny MCCANNNEY (GB – Husqvarna) crept into the mix in Spain and looks to build on that in Italy.
Feeling the effects of the demanding schedule, Antoine BASSET (F – KTM) will look to regroup following a difficult outing at GP of Euskadi. Same story for Cristobal GUERRERO (ESP – Yamaha), Ivan CERVANTES (ESP – KTM) and Gianluca MARTINI (I – Kawasaki).
Italians Davide GUARNERI (Honda) should feature strongly after an encouraging Spanish GP while Simone ALBERGONI (Kawasaki), Rudy MORONI (KTM), Alessandro BATTIG (Honda), Jonathan MANZI (Husqvarna) and Deny PHILIPPAERTS (I – Beta) will look to score their first points in the EnduroGP category. Oscar BALLETTI (Honda) also makes a welcome return to competitive action.

REDONDI on his way to the world crown?

Man of the moment, Giacomo REDONDI (I – Honda) marches ever closer to the 2016 Junior World Championship. Now 70 points clear of his closest rival Albin ELOWSON (S – Husqvarna), the Italian is also capable of securing the title on Saturday! Given the demands of his team manager Carlo CURCI, Redondi will also seek the perfect season of 16 wins out of possible 16.
ELOWSON, Diogo VENTURA (P – Gas Gas), Josep GARCIA (E – Husqvarna), Henric STIGELL (SF – TM) or Davide SORECA (I – Honda) could be able to thwart his plans, but have yet to do so. On the home front, we will keep an eye onMatteo CAVALLO (Beta) and Michele MARCHELLI (Husqvarna) and returning Matteo BRESOLIN (Kawasaki) who went from Beta Boano to KE Kawasaki team.

In FIM Youth Cup 125cc, Jack EDMONDSON (GB – KTM) will want to continue his good run of form  that began in Finland. But he can’t become overconfident as Jean-Baptiste NICOLOT (F – Yamaha) returns following injury. The French youngster will aim to keep his title hopes alive and therefore knows winning is his only option. For their part, Lee SEALEY (GB – Yamaha), Valerian DEBAUD (F – Yamaha), Anti HANNINEN (SF – Husqvarna) or Enric FRANCISCO (ESP – KTM) and Ruy BARBOSA (CL – Husqvarna) will have eyes on a podium result in Italy.

Always a highlight on the EnduroGP calendar, the Grand Prix Acerbis of Italy should be a great race charged with Italian enduro passion. See you on July 15-17 in Fabriano, in the province of Marche for the seventh and penultimate Grand Prix of the Maxxis FIM EnduroGP World Championship!