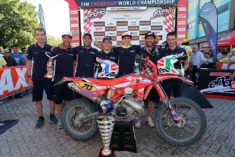 The holidays are finally here for the EnduroGP paddock! Now it’s time for sunbathing on the beach, travelling and adventures, or training on jetskis and bicycles. But first, let’s look back at the penultimate Grand Prix of the season, masterfully put on by the Moto Club Artiglio of Attigio.

A new Moto Club has entered the race for the best organization of the year! The Moto Club Artiglio of Attigio showed generosity, professionalism, and desire to achieve a super GP throughout the week leading up to the event. The paddock was well situated around the Palazzo Guerrieri, close to a commercial shopping area and sports hall. Two of the special tests were close to each other in the small village of Attigio, and another less than a kilometer from the paddock, allowing for easy access for everyone. Giovanni BALDUCCI and the Chairman of the Club Luca BARTOCCETTI brought together all the crucial elements of a great GP to attract as many spectators as possible. It will be difficult for the FIM and ABC Communication to choose the winner of the “Best Organization of the Year” title. Already in contention are the HEMK of Heinola, the Göta MS of Enköping, and the Moto Club Aiala in Gordexola. And now the Moto Club Artiglio of Attigio from Fabriano joins the ranks. Don’t forget, the Trial Club of Cahors could also join the race for top honours.

During the Acerbis Grand Prix of Italy, Italian radio station RadioBlu.com set up shop in the middle of the paddock to broadcast the entire GP live. With a DJ and mini-studio set up from Thursday onwards, the radio station interviewed many of the championship’s top protagonists, and gave ‘real time’ results during the day… a fantastic idea by both Radio Blu and theMoto Club Artiglio of Attigio!

Among the manufacturers, Steve HOLCOMBE (GB) and Beta could take advantage of a mechanical failure suffered byPHILLIPS (Sherco) on Sunday. The Italian brand managed by Fabrizio DINI now takes a small lead before the final round. Indeed, Beta now have 25 points ahead of fellow Italian brand TM… Meanwhile, Sherco are relegated to third place, 30 points behind Beta. Keep an eye on the Austrian brand KTM which, thanks to the superb performance from NAMBOTINon Saturday, put themselves in a position to climb the leaderboard, currently 4th. Husqvarna complete the Top 5, whileYamaha come in at 6th position…

As you may have noticed, from the Grand Prix of Finland onwards, we have a new feature on EnduroGP’s official Facebook page; a “drone” has provided live broadcasting of the major duels of the Super Test. We are hoping more and more people will tune in to enjoy the live spectacle and begin to grow the EnduroGP community on the social network, as the page reaches almost 200 000 fans. See you on Facebook on Friday 9 September for the last Super Test of the season… if the weather permits!

After the mechanical hitches of Steve HOLCOMBE and Eero REMES (SF – TM) in the Basque Country two weeks ago, everything seemed to be going well for Matthew PHILLIPS (AUS – Sherco) and we even started to think he had a grip on the trophy. But nothing is guaranteed in this sport and each Grand Prix brings its own good and bad fortune… in Fabriano it was the Australian who had to give up on the second day because of a mechanical problem. Unfortunately for PHILLIPS, his main rival, HOLCOMBE, won the day. And at the same time REMES took a decent handful of points. All these twists and turns in the title chase promise us a breathtaking season finale!

HOLCOMBE – The Winner Takes It All

For the last fifteen years the Italian organizers have decided to recognize the fastest rider over all its tests. On this occasion, the M.C. Artiglio created a beautiful trophy in honor of a tragically deceased member of their club, Massimo ROANI.EnduroGP was happy to support this idea… and after two days of racing, the Briton Steve HOLCOMBE (GB – Beta) won this impressive award. One more trophy for the upbeat Beta rider, who was clearly extremely strong in Italy’s Marche region.

More than a Moto Club

Many organizing clubs demonstrate tremendous professionalism, which is a real treat for the FIM and ABC Communication. But MC Artiglio had their own unique way of working – a “family atmosphere”. Giovanni BALDUCCIexplained to us: “For several months we have come together every weekend at our HQ for meetings, and especially to share great meals and spend time together. And for the last three weeks, we have met every night to eat, debrief and plan the GP. I must admit that even though there were sometimes tense moments, we always had a lot of fun together and worked well together. The Moto Club has been a second family to all of us for many years!”
This system created by one of the most active members of the Club, who is also the deputy Mayor for Sport and Culture in Fabriano, paid dividends and the results of their frequent and friendly meetings were visible throughout the week. We witnessed a club with a lot of passion and plenty of availability to meet all the demands placed upon them. The hard workers of the MC Artiglio were ultimately rewarded when they could present the trophies to the winners on Sunday…

Puerto Lumbreras 2004 – Gordexola 2016… the Acerbis Grand Prix of Italy marked the 101st Grand Prix for ABC Communication. Alain Blanchard and the ABC Communication staff decided to celebrate the symbolic number of 100 GP whilst in Fabriano. They were surrounded by many sponsors (Acerbis, represented by Franco ACERBIS himself, Sidiand Scott Sports) as well as Jean-Guillaume MEILLER, Jean Paul GOMBEAUD and Christian DEJASSE from the FIM, team managers Fabrizio AZZALIN, Franco MAYR, Sergi DURAN, Marco D’ARPA and Carlo CURCI. And “old friends” such as Giovanni SALA, Paul EDMONDSON, Piero BATINI and Daniele MADRIGALI. ABC Communications celebrated the event with a great atmosphere, commemorative shirts made by Acerbis, a delicious “birthday” cake, and superb cocktails created by The Cocktail King, Stefano SERENI…
Here’s hoping for a good hundred, or more, in the future!