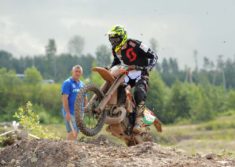 Day 2 of the third round of European Enduro Championship was held today at Ogre, in Latvia, and also in this occasion the “junior” riders were beaten: the fastest rider of the day was, in fact, Czech Jaromir Romancik again. During the last stages his KTM had electric problems, and it took him time to solve them, but he managed to do it. The junior riders, however, are not too far: Andreas Linusson, riding his first European Championship in Latvia, was only 1.26 seconds behind him. And his fellow countryman Jesper Börjesson was only 14 seconds away. Italian Nicolas Pellegrinelli was three minutes early at the time control, thich took him out of the championship points, and this is the reason why he missed taking the lead in the overall. The leader is still Brad Freeman, even if he did not race, because of recent surgery in his shoulder. But now today’s winner Romancik is only 5 points behind him. The former champion Maurizio Micheluz is now only nine points away from the leadership of the standings.

The riders fought against the weather: a very heavy rain in the middle of the day transformed the third test and the stages into mud holes and slippery ground. Lots of riders got stuck and lost a lot of time. One of these was Guido Conforti, the first day’s winner of the E1- Class. He lost too much time, so the Dutch Thierry Pittens took his first ever win of a day.

Jaromir Romancik does not only win the Overall, but again the E2- Class, in front of Swedish rider Tommy Sjöström. Third position for Tom Sagar, defending champion and leader of the championship.

After being beaten for one second on Day1, the E3-class-champion Maurizio Micheluz took his revenge: this time he was 1.1 second in front of Rannar Uusna from Estonia. “The problem is not the sand: the big 500cc Husqvarna needs more space to show all its power. It was often too narrow here”, said Micheluz.

As fast as the former champion Micheluz was his fellow countryman Andrea Verona, who won the Junior U20 class.

In the Women class Jane Daniels was the only rider without time penalties and she won in front of Hanna Berzelius from Sweden. The final of the European Enduro Championship will take place in the Netherlands on 28-29th October.