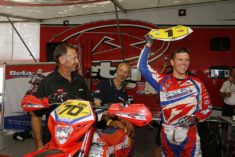 VIDEO day1 Britain’s Steve HOLCOMBE (Beta) has claimed the 2016 Enduro 3 World Championship title following his E3 class win on day one of the AMV GP of France, held in Cahors.
Starting the event with one hand on the title Steve claimed his 11th day win of the series to wrap-up his first ever enduro world championship title in style. “Winning this title is amazing, the perfect end to what has been an incredible year for me,” commented a delighted HOLCOMBE at the end of the day. “It’s been an anxious time running up to this event. I felt good today but not exactly at the level I’ve been riding all year. It was close with Manuel MONNI (TM) today and Johnny AUBERT (Beta) had a great ride considering his injured shoulder. They kept me on my toes but I did enough to become world champion, which feels amazing.”

Day one of the AMV GP of France saw riders face extremely dry and dusty conditions, with Husqvarna’s Mathias BELLINO the big winner in the overall EnduroGP class. But it was a close run thing. Kept honest throughout the day by KTM’s Taylor ROBERT, BELLINO, cheered on by his home fans, claimed victory by finishing just over four seconds ahead of his American rival. Less than four seconds behind Loic LARRIEU  delivered a solid day’s performance to place third.

Fourth in EnduroGP went to Nathan WATSON (KTM) the day’s Enduro 1 class winner. “It was a perfect day for me. After winning the Super Test last night I had a great start, topping the overall standings in the opening two tests,” explained Mathias. “That helped create a bit of a gap to the rest of the field, so I spent the rest of the day trying to make sure I stayed on top. I’m really happy with the overall win today and even happier it came in front of my home crowd. The French fans were incredible today.” EnduroGP championship leader Matt PHILLIPS (Sherco) ended day one down in fifth position, ensuring that the 2016 EnduroGP title, which he leads, will be settled on day two in Cahors.

Starting the event unable to remove the security lock on the front disk of his bike inside the parc ferme Nathan WATSON endured a stressful beginning to day one. With his subsequent time penalty removed the young Brit battled throughout the day with Eero REMES (TM). Despite REMES holding the upper hand throughout much of the day, a mistake on the final enduro test saw WATSON eventually end the day 10 seconds ahead. In preventing REMES from winning WATSON ensured that the outcome of the E1 championship will be decided on the final day of the series.

Returning to the championship following a lengthy lay off due to injury Jamie MCCANNEY (Yamaha) landed back on the podium in third. With WATSON and REMES a comfortable distance ahead of Jamie in third, fourth placed Oscar BALETTI (Honda) finished just half a second from the podium with Ivan CERVANTES less than three seconds back.” “It was an eventful start to the day for me. I went to pick my bike from the parc ferme and for some reason I was unable to open the lock with the key I had. I pushed on through the day as normal and my speed was good. It was good to have a dry GP for a change, we’ve not had too many this year. The cross test was really hard, just flat corners. I surprised myself on that, getting good times there.”

Steve HOLCOMBE’s Enduro 3 class winning result ensured the Beta rider claimed his first ever world title, finishing ahead of Manuel MONNI and Johnny AUBERT at the end of a day that saw spectators flock to the exciting, wooded section of the enduro test. Due to his shoulder injury, and the fact that he can’t now be beaten for second in the Enduro 3 championship, AUBERT won’t compete on day two. Falling just short of a top three result, French riders Antoine BASSET (KTM), Jeremy JOLY (KTM) and Romain DUMONTIER (Yamaha) rounded out the top six.

In the Enduro Junior class it was the already crowned class champion Giacomo REDONDI (Honda) who secured the win, finishing ahead of Spain’s Josep GARCIA (Husqvarna) by just 1.14 seconds. REDONDI’s speed in the day’s final cross test saw the Italian move to the top of the class. Third went to Swede Albin ELOWSON (Husqvarna).

Claiming her first ever win in the Women’s class Germany’s Maria FRANKE finished ahead of Laia SANZ to top the podium. Winning three of the day’s special tests, enduro rookie FRANKE placed just over two seconds ahead. With Jane DANIELS finishing third the Women’s championship will be decided on day two, SANZ carrying a slender lead into the final day of the championship.