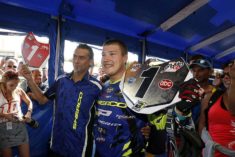 The 2016 EnduroGP championship drew to a close in spectacular style today in Cahors where Tasmanian Matt Phillips (Sherco) put the finishing touches to his incredible season and secured both the EnduroGP (overall) and Enduro 2 World Championship titles at the AMV GP of France.
Just as on day one riders faced blisteringly hot temperatures and extremely dry and dusty conditions as the 2016 EnduroGP series signed off in style. Joining Phillips as world champions were Finn Eero Remes (TM) who kept his cool to claim a second consecutive Enduro 1 World Championship while Laia Sanz (KTM) claimed the Woman’s title.

But the day’s fastest riders was American Taylor Robert (KTM) who brought his first season of EnduroGP competition to a close in impressive style, topping the EnduroGP results by close to eight seconds from Frenchman Loic Larrieu (Yamaha). Despite winning just two of the day’s special tests Taylor’s consistency saw him hold firm at the top of the class while Nathan Watson (KTM) kept Larrieu honest to eventually finish just seven seconds behind in third. “To get the overall win feels great. I couldn’t have thought of a better way to end my season,” admitted Taylor. “At the beginning of the summer I had a few rough races so it means a lot to come back and get an overall win. Finishing second overall yesterday I knew I could get the win today. I was battling all-day long with Larrieu and was so nervous coming into the final test with just five seconds separating us. I let it all hang out and got the win.” Next up in the overall EnduroGP class was Matt Phillips, who managed to claim two tests wins on his way to the EnduroGP title. Fifth having started the day in winning form was Mathias Bellino (Husqvarna) with Italian Davide Guarneri (Honda) seventh and Danny McCanney (Husqvarna) rounding out the top eight.

Nathan Watson was the rider at the top of the Enduro 1 class results on the final day of the championship, a well-deserved reward that perfectly reflects the incredible season the rookie enduro rider has had in 2016. But knowing that the E1 title was within his grasp Finland’s Eero Remes took no chances and finished third. “I really enjoyed this GP,” explained Watson. “I did a good first lap, which helped create a bit of a gap. Then on lap two I felt the pressure and ended up making a couple of mistakes. Fortunately, I did a really good last lap ending up third overall and with one more victory in Enduro 1. I did all I could in terms of the championship, winning both days, but obviously Remes had a great season and deserves to be champion.” With Watson winning the day in E1 and Remes claiming the title with his third place result it was Danny McCanney who placed second. But the rider with the biggest smile on his face was title winner Eero Remes. “Winning the title was my goal today, so I wasn’t too worried about winning the class. I had a good day and it’s great to win the E1 title again. It’s been a great season for TM so to be able to give them another title is fantastic.”

In the Enduro 3 class it was World Champion Steve Holcombe (Beta) who set the pace, despite a fall mid way through the day. Never placing lower than second in class and topping six of the day’s special tests the Brit placed ahead of French duoAntoine Basset (KTM) and Jeremy Joly (KTM). “Winning the E3 title was what this GP was all about for me, so it was hard to push as hard as I could today knowing that I’d achieved what I set out to do yesterday,” explained Steve. “I didn’t have anything for the guys in the overall results but it’s great to end the year with a win in E3.”

Josep Garcia (Husqvarna) was the rider to beat on day two in the Enduro Junior class, bringing Junior class championGiacomo Redondi’s (Honda) near season-long winning streak to an end. Topping each and every other day of the championship Redondi fell just 6.39 seconds short of the perfect season. Rounding out the Junior class podium was SwedeAlbin Elowson (Husqvarna).

Laia Sanz (KTM) ended her 2016 Enduro World Championship campaign in winning style, topping the Women’s class on the final day of the series and in doing so becoming Enduro Women’s World Champion. Second to enduro rookie Maria Franke (KTM) on day one, Sanz went all out on day two and following a day-long battle with her German rival managed to finish five seconds ahead to clinch yet another FIM world title. “I’m really happy I won this championship,” enthused Laia. “It’s been a difficult year for me and I had to dig deep to come out on top. Competition in our class keeps getting stronger. After the opening round in Finland I knew I had to work hard if I wanted to keep my chances for the title alive. I managed to stay strong mentally and kept fighting for the win every time out. This weekend I had a great battle with Maria Franke. She got the best of me on day one, but I pushed a lot and managed to secure the win today.”

Just as on day one the 125cc Youth class saw three French riders fill the podium, with World Champion Jack Edmondson (KTM) fourth. Enric Francisco (KTM) battled his was to the top of the podium, edging out countryman Thomas Dubost (KTM) by 3.42 seconds. Third went to Isaac Devoulx (Husqvarna).