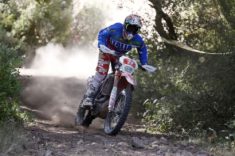 At the end of the first day’s competition at the 91st edition of the FIM International Six Days Enduro (ISDE) in Navarra, Spain the USA have taken an early lead in the World Trophy Team competition, just as they did at last year’s event in Slovakia. Helped by overall runner-up and third place results from team members Kailub Russell – KTM and Taylor Robert – KTM, the USA team sit twenty-six seconds ahead of Italy with Great Britain third at this point.

One of the most significant developments on the first full day of competition was that defending World Trophy winners Australia saw their team reduced to three riders when Josh Strang – Husqvarna injured his ankle and was forced to withdraw from the event early on lap two. With the USA leading the way in the World Trophy competition Italy, led by the day’s outright fastest rider Giacomo Redondi – Honda, delivered the goods to hold a close runner-up position. Great Britain holds third with less than one-minute separating the top three nations.

“Team USA had a pretty good day, so we’re hoping we can continue that. Aside from Thad (Duvall – Husqvarna) having to do a little work to his bike everything was good,” commented USA World Trophy team rider Kailub Russell. “There’s a long way to go, but it’s good to have made a positive start. It was a tough day being in the dust all day. I only had one test that didn’t go so well, so I was pleased with how I rode.”

As expected Australia’s Women’s World Trophy team took an early class lead, despite the mechanical issues that affected Jessica Gardiner – Yamaha. Close to one and a half minutes ahead of Spain it was Australia’s Tayla Jones – Yamaha who ended the day as the fastest outright Women’s competitor. Helped by the strong performance from Maria Franke – KTM, Germany are placed third with the USA and Sweden rounding out the top five.

Day two of the 2016 ISDE will see competitors ride the exact same course as on day one, although light rain is expected during the day.

The 2016 ISDE is currently taking place in Navarra, Spain from Tuesday 11th to Sunday 16th October.