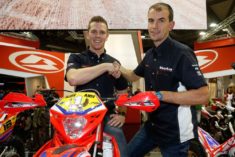 Steve Holcombe is delighted to announce the renewal of his contract with the Beta Factory Enduro Team. The agreement will see the 2016 Enduro 3 World Champion continue to race with the Italian manufacturer’s official team throughout the 2017, 2018 and 2019 seasons.

Joining Beta’s Factory Enduro Team at the beginning of 2016 Steve has enjoyed a stellar rookie season in the senior ranks of the Enduro World Championship, the highlight being winning the Enduro 3 World Championship title at the season finale in France.
Clinching his first Enduro 3 victory of the season on day two of a dusty GP of Morocco, Steve went on to wrap up the 2016 championship with a total of 12 class victories to his credit. From the extremely muddy GPs of Portugal and Greece to the dry conditions in Finland and France, Steve was also a strong contender for the overall EnduroGP podium each time out. Topping the outright standings four times during the 2016 season, he finished third in the overall EnduroGP World Championship, just one point from the runner-up position.

Remaining aboard his trusted Beta RR 300 two-stroke machine, the reigning Enduro 3 World Champion is set to take on a new challenge for the coming season – that of entering the premier EnduroGP category of the nine-round long 2017 FIM Enduro World Championship that kicks off in Finland on March 25.

Steve Holcombe: “It goes without saying that I’m thrilled to have agreed a new deal with Beta. 2016 was an incredible season – one that ended in the best possible way for myself and for Beta. Although it was my first year of senior class competition I learned and achieved so much. Both Beta and myself are now focused on the future and the new challenges ahead. For 2017 there are some big changes coming to the world championship with new classes and new events, so it’s hugely important to me to know that I’m as well prepared as I can be.

The EnduroGP season is going to be full of challenges, starting with the first event in Finland, but I can’t wait to get started. We’ve
already begun testing for next year so we’re already working towards bigger and better things. I’ve enjoyed an incredible season with Beta in 2016 and hope to enjoy many more great times with them over the coming years.”