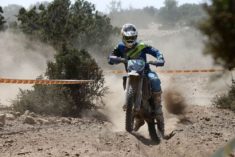 Following the opening round of the 2017 EnduroGP series at the mythical “Lake Päijänne” – an event that will long be remembered in history of the EnduroGP, the world series returns to a more traditional format for this second round of the year…

As in 2004, 2007 and 2013, Moto Club Nogalte and the city of Puerto Lumbreras volunteered to organize the traditional AMV Seguros Grand Prix of Spain. The very experienced Club chaired by Juan Franco GABARRON is set to take on its fourth GP, in and around the small town of the region of Murcia.

On the occasion of this AMV Seguros Grand Prix of Spain, the Moto Club Nogalte has drawn a course of 49 kilometers in the heart of the arid and rugged landscape of Puerto Lumbreras. The paddock will be at the Recinto Ferial. From there, the stars of EnduroGP will race towards the Technomousse Xtreme Test to “Penas Blancas” before taking the direction of the first Time Check before launching their assaults on the KTM Enduro Test, which will also be located at “Penas Blancas“. Finally, the loop will end with the Maxxis Cross Test, which will be, as in 2013, at Polideportivo, where the Friday night Akrapovic Super Test (18.00) will also take place…

Puerto Lumbreras is located in the province of Murcia and in the autonomous community of the same name. This town is located 90 kilometers southwest of Murcia and 319 kilometers north-east of Malaga. It was marked on 19 October 1973 by a heavy flood that destroyed many houses. A memorial in honor of the victims was thus built in the city. Of course, the 14,000 inhabitants of Puerto Lumbreras as well as those of the Province of Murcia are enthusiastic Enduro fans and look forward to the arrival of the Maxxis FIM EnduroGP World Championship on the 21st, 22nd and 23rd of April.

Many were convinced that Antti HELLSTEN (SF – Husqvarna) would not be seen again this season despite his position as the leader of the EnduroGP… Well, he’s back. The Finn will be present and ready to defend his status of class leader. He is currently 12 points ahead of Matthew PHILLIPS (AUS – Sherco) and Steve HOLCOMBE (GB – Beta)…
Back on more traditional terrain, the Australian and the Brit will certainly try to put a lot of pressure on HELLSTEN, to prove that his Finnish double was only due to his better knowledge of the sub-zero home conditions…
But it would be presumptuous to state that this category will be played only between these three riders. We must not forget the tenors that are Nathan WATSON (GB – KTM), Loïc LARRIEU (F – Yamaha) and Giacomo REDONDI (I – Honda). Rather good on the Scandinavian snow, these three racers will aim for the podium and especially to try and catch HELLSTEN, PHILLIPS and HOLCOMBE.
Meanwhile, the “rookie” Christophe CHARLIER (F – Husqvarna) will continue his brilliant debuts and will aim for the Top 5, while veterans Alex SALVINI (I – Beta), Cristobal GUERRERO (E – Yamaha) and Christophe NAMBOTIN (F – KTM), must already react if they are not to be left behind in the title race.
Deny PHILIPPAERTS (I – Beta), meanwhile, will try to integrate the Top 10 of the category.
Absent during the Päitsi, Jaume BETRIU (E – KTM) will be present in Puerto Lumbreras.

In the Enduro 2, the “beast” Eero REMES (SF – TM) has already begun his harvest of victories at an impressive pace! One wonders who else could dethrone him this year in the small bike category.
If his countryman Henric STIGELL (SF – Husqvarna) is second in the provisional standing, it is the young Catalan rider Josep GARCIA (E – KTM) who seems to be more likely to challenge the official TM rider after his big Performance in Finland.
Remes, despite his impressive speed, will also have to control the Australian Daniel SANDERS (KTM),  Austrian Pascal RAUCHENECKER (Husqvarna) and the official Yamaha rider Jamie MCCANNEY (GB).
After some difficulties during the Lake Päijänne, Manuel MONNI (I – TM), Davide GUARNERI (I – Honda) and Thomas OLDRATI (I – Husqvarna) are expected to improve their performances this weekend in Spain, while Danny MCCANNEY (GB – Husqvarna) will try to catch up with the points lost on the second day in Finland (DNF).
Lorenzo SANTOLINO (E – Sherco), Victor GUERRERO (E – Yamaha) and Jonathan BARRAGAN (E – Gas Gas) will be eager to shine in front of their home crowd.
Jérémy JOLY (F – Beta), Rudy MORONI (I – KTM), Romain DUMONTIER (F – Yamaha) and Gianluca MARTINI (I – Suzuki), who are absent in Finland, are also returning to the business.

POHJOLA vs the rest of the world

On another planet in Finland, Eemil POHJOLA (SF – Husqvarna) will have to prove himself again, as all observers are wondering if he will be able to repeat his performance in Puerto Lumbreras on more traditional terrain.
Davide SORECA (I – Honda) is the only rider to have put up a suitable challenge at the opening round of the season. He should put a lot of pressure on the Finn as will like Mikael PERSSON (S – Yamaha), Henry OLENIUS (SF – Honda), Antti HANNINEN (SF – Husqvarna) and Matteo CAVALLO (I – Beta).
On the Iberian side, Kirian MIRABET (Sherco) will be the leader of a group of seven riders ready to shine at home.
Note also the return of Brad FREEMAN (GB – Beta), who will undoubtedly play the leading role, as well as the great beginnings of Camille CHAPELIERE (F – Yamaha) on the World scene.
In the Youth 125cc class, with the leader Hermanni HALJALA (SF – Husqvarna) absent, his compatriot Hugo SVARD (Husqvarna) and Italy’s Andrea VERONA (TM) will try to take control of the category but they will have to face the Chilean Ruy BARBOSA (Husqvarna), the Frenchman Léo LEQUERE (TM), the Swedes Emil JONSSON (Yamaha) and Marcus ADIELSSON (Husqvarna) and the big Spanish armada of the RFME led by Gerard GOMEZ (KTM).

Laïa SANZ (E – KTM) will face strong competition as the queen of enduro takes on a number of competitors all looking to de-thrown the Spanish ace…
Starting with Germany’s Maria FRANKE (KTM), who proved to be SANZ’s biggest rival during her first Enduro season, has worked out her weaknesses in the Xtreme tests during off-season. Jane DANIELS (GB – Husqvarna) will also be closely monitored. She started 2016 by winning four days in a row before dropping at the end of the season.
Sanna KARKKAINEN (SF – KTM) will also be present after a very encouraging first year where she finished in 4th place. Also noteworthy is the return of Australian Jessica GARDINER (Yamaha), who has always given SANZ a bit of trouble, and Juliette BERREZ (Yamaha) and Valérie ROCHE (Sherco) of France.

This AMV Seguros Grand Prix of Spain is highly anticipated following the thrilling  the season opening  AMV GP of Finland. There is no doubt that thousands of Spanish enduro fans will attend the various stages to encourage the elite of the World Enduro. Let’s also bet that the experienced Moto Club Nogalte will have gathered all the elements to make of this second stage of the season a great festival in the South of Spain…