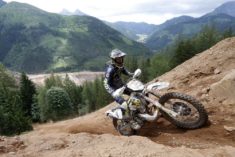 ROCKSTAR ENERGY HUSQVARNA FACTORY RACING’S JARVIS EARNS A HARD-FOUGHT RUNNER-UP RESULT AT ERZBERG’S HARE SCRAMBLE WITH BILLY BOLT SEVENTH
Rockstar Energy Husqvarna Factory Racing’s Graham Jarvis has finished as runner-up to Alfredo Gomez at the 23rd running of the ErzbergRodeo Hare Scramble. Just over three minutes behind eventual winner Gomez, Jarvis rode yet another highly impressive race around the Iron Giant. Once again overcoming a cautious start and having to work his way passed countless riders during the faster, dustier sections of the course, once into the more technical sections he worked his way towards the front but ultimately ran out of time to challenge for the win.

Once again showing himself to be one of the best ever ErzbergRodeo competitors, Graham Jarvis made a typically steady start before increasing his speed as the unforgiving Erzberg terrain intensified. Making up time on his rivals through the extended Karl’s Dinner section, the veteran racer worked his way towards the front, passing all but one of the early pace setters. Closing in to within just over three minutes of Gomez, Jarvis claimed a well-deserved runner-up result.

For Billy Bolt getting to the start line at Erzberg was arguably a bigger challenge than finishing the race. Riding a bike just once during the three weeks prior to the event following a foot injury that required two operations, Bolt showed incredibly determination and focus to earn a highly creditable seventh place finish.

Reigning AMA EnduroCross and FIM SuperEnduro champion Colton Haaker endured a challenging Erzberg 2017. Claiming an 11th place result, Haaker suffered with arm pump and a number of small crashes while charging hard during the early stages of the race. Battling his way through the hugely demanding Karl’s Dinner section, he then pushed as hard as he could to claim his first Erzberg finish in 11th.

Graham Jarvis: “I’m happy with second. Hats off to Alfredo he was very strong, he rode a great race, and I just wasn’t able to get close enough to him early enough. I didn’t get a good start and then lost five or six positions when I messed up one of the hills. I was behind then in some of the single file wood sections. I had to fight my way back. But I felt pretty strong during the second half of the race. I pushed through Karl’s Dinner and made up some time there. I seemed to get a little energy back after Karl’s Dinner, things were pretty close to Gomez – if he’d have made a mistake I might have been able to catch him. I don’t have any complaints, it was a difficult as it always is but there’s not too much I’d change. The younger riders are getting more experienced so I’m pleased with second.”

Billy Bolt: “It’s hard to be disappointed with a Hare Scramble finish, especially when I’ve only spent one-day on a bike in the last three weeks following my foot injury, but I feel like I could have delivered more. I felt like my speed was where it needed to be, but I just made one or two mistakes that were costly – against riders like Alfredo, Graham and Cody you just can’t afford to do that. My foot was sore, so I was trying to ride in a way that I didn’t use it too much. But when you’re trying to ride across Karl’s Dinner that’s not easy. I guess a seventh place result isn’t too bad. Congrats to Graham and the other podium finishers. I’ll be back stronger next year.”

Colton Haaker: “It’s certainly better to finish this year, rather than not finish. I put a lot of work in this year because I really wanted to be one of the finishers. I thought I was in a pretty good position early on, but suffered with arm pump. I pushed crazy hard, passing riders, but had so many simple falls. I kind of came good after Karl’s Dinner, had a cool battle with a few riders and eventually got to the finish.”