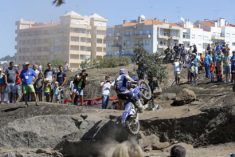 The summer break has finally arrived! The riders will now be able to relax for two months and recharge their batteries before the next Grand Prix which will take place at the legendary Hawkstone Park circuit in the UK in late September. But for now, it’s time to debrief what happened last weekend in Portugal…

“In 15 years of working with the World Championship, I have rarely met a Moto Club as professional and efficient as you…” These were the words from the Race Director Heinrich SCHMIDT at the Jury meeting which ended the Polisport Grand Prix of Portugal. And the FIM official was not exaggerating; the Moto Club coached by Helder ESTEVES did an amazing job throughout the race week and for many months before. Electricity, water and Wi-Fi were ready on Monday before the opening of the paddock, and there were more than 150 volunteers present during the three days of racing to ensure safety on the special tests and on the roads. The Super Test was organized masterfully, as were the other tests – especially the Xtreme Test. There were no big hiccups and even the slightest problem was resolved very quickly and efficiently. Escuderia Castelo Branco is clearly in the running to win the title of “Organisation of the Year”.

In recent years, Belgian representatives in EnduroGP havebecome few and far between. Indeed, since Jean-François GOBLET and Cédric CREMER, we had not seen any regular riders competing in the World Championship.

But this season, the country can count on the promising youngster Antoine MAGAIN (Yamaha) in Juniors. Although he had some problems at the start of the season, the rider from Namur has now got the measure of the Championship, and is knocking on the door of the Top 10. For this Polisport GP of Portugal, he was joined by Matthew VANOEVELEN (Yamaha). First discovered during a SuperEnduro race two seasons ago, VANOEVELEN participated in the FIM Youth 125cc category in Portugal and enjoyed some success; he fought for the podium on Saturday and ended up 4th… an interesting debut for this Yamaha rider who we hope to see again before the end of the season. With these two young riders, Belgium can be reassured of a good future in Enduro… now we are just waiting for the return of a Belgian GP!

A Rough but Beautiful Xtreme Test

From a sporting aspect, the Escuderia Castelo Branco seems to know its subject perfectly. For this 6th round of the Maxxis FIM EnduroGP World Championship they put together a technical track for the riders, in the special tests as well as in the transfers. The Technomousse Xtreme Test was especially spectacular and challenging, located in the very heart of the city, impressing onlookers with its all-natural layout. We must admit that it seems difficult to beat the magnificent setting of the Xtreme Test in Grevena (Greece) on the banks of the Venetikos river, but the route in Castelo Branco put the riders on edge and gave a lot of excitement to the thousands of spectators present during the weekend. Mixing rocky uphill passages, tight turns and extremely high drop-offs, this special test created a lot of interest and was the scene of many twists and turns in the championship battles.

The difficulty of the course coupled with the draining heat caused a lot of problems for the riders. Unfortunately we saw some new additions to the infirmary… Ramon QUER MOLGO (Husqvarna) was one of the first victims of the Portuguese track. Suffering from ankle pain following a fall at the Akrapovic Super Test, the Spanish rider gave up the fight on Saturday’s first special. Unlucky Christophe NAMBOTIN (F – KTM) took an injury to his toe, although the Frenchman told us on Sunday night that it should heal quickly. And there was a big fright for Matteo CAVALLO (I – Beta) and all the paddock on Saturday when the Beta Boano rider took a heavy fall on the KTM Enduro Test. Thankfully the result of the terrifying accident was only a few bumps and bruises and the Italian should be back in the paddock soon. In the Junior class Mikael PERSSON (S – Yamaha), currently 3rd in the provisional ranking, had to throw in the towel on Sunday after a dislocation of his left shoulder…
We wish all the riders a speedy recovery and hope to see them again after the summer break at Hawkstone Park.

On Friday, Loïc LARRIEU (F – Yamaha), Matthew PHILLIPS (AUS – Sherco), Diogo VENTURA (P – Honda), Gonçalo REIS (P – KTM) and Steve HOLCOMBE (GB – Beta) were invited by the mayor of Castelo Branco to visit the city’s museum. It was an opportunity for the riders to get to know the culture of the city. HOLCOMBE confided to us: “It is always good to learn about other cultures, to know more about the history of the cities where the GPs take place… for us riders, with our busy schedules, it is rare to be able to do this. But I have to admit that it feels good to get out of race mode! “

At a time when the French youth are turning more towards the European Championship, one team has decided to bring its promising youngsters to the Maxxis FIM EnduroGP World Championship: the TM XCentric team run by Fred DI GIAMBATTISTA! And it was a good decision since Léo LE QUERE has enjoyed several podiums in the FIM Youth 125cc and even took his first victory inCastelo Branco!  And Valérian DEBAUD has participated in three encouraging Grand Prix (Spain, Italy, Portugal) and remains the best Frenchman in Junior – along with Anthony GESLIN (Beta) who scored a superb 5/5… so well done to Fred DI GIAMBATTISTA, his two young guns, and all the members of the TM XCentric team!

It was a huge shock to the paddock when we learned this weekend about the serious car accident which Robert PAIRAN was a victim of on his return from the Maxxis Grand Prix of Grevena Greece. PAIRAN, a journalist for many German magazines specialising in Enduro including Top Speed and Dirtbiker Mag, is passionate about Enduro and is a well-known and ever-friendly member of the paddock. In a coma for two weeks in Thessaloniki, Robert was finally able to fly home to Germany last week. On Saturday evening, just before the podium, the riders – on the initiative of PAIRAN’s colleague, Dario AGRATI – sent a message of strength and good wishes to this friend of the paddock.

Used to organising numerous motorsport events on a national level, the Escuderia Castelo Branco set the bar very high for its first venture into EnduroGP; this became clear from the Akrapovic Super Test onwards. 5000 spectators came to enjoy the best riders in the world battle it out head-to-head. With a sublime sunset in the background, the audience attended a real Enduro show featuring DJs, refreshments, a VIP area and a final spectacular fireworks display. For their part, the riders also played a huge role in the success of this show, with a big battle for the top time of the night which finally saw Yamaha’s Loïc LARRIEU (F) take victory. A successful night of entertainment from the Escuderia Castelo Branco, who achieved one of the most beautiful Super Tests of recent years.

Privateer of the Year?

Last year, Antoine BASSET (F – Gas Gas) was without doubt the “Best Privateer of the Year”. This season, we must put forward Jaume BETRIU (E – KTM) for this award… He is competing with compatriot Cristobal GUERRERO (E – Yamaha) for this honorary title, and the KTM rider has already managed two Top 5 placings and was very close to a podium in Greece! With a lot of determination, the Catalan has made a superb season and proves it is always possible to compete with factory riders and teams despite being on a low budget. We wish him a happy end to the season, and hope he can “do a BASSET” and earn himself a contract with a factory team if he takes the Privateer of the Year title.