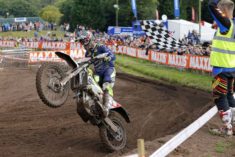 In the EnduroGP category there was happiness and relief and extreme disappointment in equal measure for the UK’s two leading riders. Steve Holcombe (Beta), who needed just a handful of points to clinch the EnduroGP title, made the perfect start to the event and lead from the start. Followed by Nathan Watson (KTM) he pushed hard from the front and looked extremely comfortable in the lead. But shortly before the one-hour mark he was forced into the pits with a technical issue that saw his lead vanish. Battling his way forward and setting the fastest lap of the race Steve eventually placed fifth. Nathan Watson (KTM) was the rider to eventually claim the EnduroGP class win, but not before he battled with Christophe Charlier (Husqvarna). Taking over the lead from Holcombe, Nathan held a comfortable advantage for much of the second hour of the race before being caught and passed by Charlier. “I got up to third on the opening lap and then followed Steve early on,” explained Nathan. “When Steve ran into troubles I took over the lead, but after about an hour it started to get tough. I was able to keep a good pace going up to my second pit stop, when I hit a bit of a wall. I could see Charlier catching me, but then he crashed and I took the lead again. I gave the last three laps everything, but it was certainly one of the hardest things I’ve done.” Putting in one of the strongest performances of the race, Charlier charged his way to the front of the EnduroGP class following a poor start. Taking the lead from Watson he then hit a tree, yet refused to throw the towel in. Managing to get back into the lead, in needing to make a final pit stop he fell behind Watson and eventually placed second. Putting in one of the most consistent performances of the race Loic Larrieu (Yamaha) rounded out the Enduro GP podium in third, just six seconds behind Charlier. Spain’s Jaume Betriu (KTM) was another rider to put in a notably strong performance to finish fourth, ahead of the day’s unluckiest rider Steve Holcombe (Beta). Cristobal Guerrero (Yamaha), Denny Philippaerts (Beta) and Giacomo Redondi (Honda) rounded out the top eight with wild card rider Brad Anderson (KTM) finishing ninth.

Without doubt one of the stand out performers of the event was Pascal Rauchenecker (Husqvarna) who topped the Enduro 2 class, as well as managing to overtake all of the EnduroGP class riders ahead of him to become the first rider to reach the finish. Eventually finishing close to two minutes ahead of Husqvarna team-mate Danny McCanney (Husqvarna), Pascal showed no signs of fatigue during the closing stages of the race and charged to a convincing win. In doing so he became the first Austrian ever to win a day of the EnduroGP World Championship. “I had a great bike set-up today and was really able to find my rhythm in the woods, and I felt really good,” commented Pascal. “Everything went really well. I stuck to my plan of not pushing too hard at the start. I could have pushed harder during the final hour of the race, but once I got into the lead I didn’t need to do that. It was a tough race but everything went really, really well.” For much of the early part of the three-hour race it looked as if any one of six riders might top the E2 class. Josep Garcia (KTM) and Jamie McCanney (Yamaha) were both left at the back of the class as their bikes were slow to fire into life. In contention for the win throughout the race Dany McCanney (Husqvarna) eventually placed second with championship leader Josep Garcia (KTM) rounding out the top three. Looking to reduce Garcia’s advantage at the top of the E2 standings, Jamie McCanney (Yamaha) narrowly missed the podium following an eventful race. Davide Guarneri (Honda) placed fifth ahead of early pace-setter Eero Remes (TM) with Henric Stigell (Husqvarna) and Jonathan Barragan (Gas Gas) rounding out the top eight. Eero Remes (TM) set the fastest lap of the race in the E2 class.

Closing to within just four points of Enduro Junior championship leader Davide Soreca (Honda) having been as many as 44 points behind after missing the opening round of the series, Brad Freeman (Beta) put the finishing touches to the perfect weekend by claiming a hard-fought win. Completing 18 laps just as the fastest EnduroGP and Enduro 2 class riders did, Freeman placed two minutes ahead of Soreca. “I had to tell myself to slow down during the second half of the race,” admitted Freeman. “I felt really good and was passing some of the E2 class riders and needed to remind myself that they weren’t in my race. I got a perfect start, which made things easier. I was 30 seconds ahead in the juniors at the end of the second lap, but then started catching the E2 class riders. I tangled with one and I went down pretty hard. I dropped to second in class before taking the lead again. From there I kept my head down and it all went well for me. It’s great to win here in the UK, it’s been a great event.” With Freeman taking the Enduro Junior class win and with class leader Soreca runner-up, third went to Swede Albin Elowson (Husqvarna) who finished three minutes behind Freeman. Freeman, Soreca and Elowson were the only three junior class riders to complete 18 laps.

In the 125cc Enduro Youth class Chilean Ruy Barbosa (Husqvarna) added victory to the sprint enduro win he claimed on day one. Placing close to one-and-a-half minutes ahead of Leo Le Quere (TM) Barbosa was also joined on the podium by Andrea Verona (TM).

The 2017 Maxxis FIM EnduroGP World Championship now moves onto the eighth and final round of the series, the Acerbis GP of Germany in Zschopau on October 20-22.