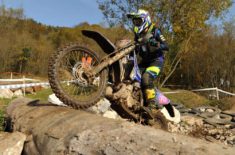 The second day of the three-day final round of the Enduro European Championship took place in Gelnica / Slovakia, on Saturday, 14 October 2017. One day before the ultimate end of the championship, the in four different classes the champions are crowned already. They had reached so many points in advantage that they can no longer be called up.

The first new champion was Joakim Grelsson in the youngest of the junior class, in the U20 class for the 125cc riders. In the morning the Swede was still just nine points ahead, but his fellow countryman and challenger Calle Johansson got technical problems and fell out prematurely. So the KTM rider was able to catch up no longer and won this title as well as the working-pavilion, the promoter Wolfgang Butzner had donated as support for the youngest drivers for the championship title.

Matteo Pavoni was also a new champion in the Junior E1 class. The KTM rider could have finished fourth in the class on this day to catch the title, but he became faster ever: Not only winning his own class, in the very last special stage, he did the fastest time of all riders and rise up to seconds overall. Still, the Italian does not celebrate his championship, because on the last day he will definitely want to win the overall title, where he is in the lead with only seven points. That means he had to finish forth position to be sure to win the overall als well.

In the senior Enduro1 class, the Swede Andreas Linusson secured his title prematurely: his competitor Daan Bruijstens from Holland did not manage with the conditions on the ground and landed on the first two days on the ninth and eighth in the class. This gave the KTM driver Linusson, who took no risk, a fourth place to go uninhibitably into the lead.

The fourth title of the day was to Jessica Gardiner: The Australian woman is riding with a French license and therefore can be rated for the European Championship. Despite injured shoulder and despite the unusual motorcycle, the Yamaha she-rider again won the class and has so much advantage that she can’t be caught up any more.

In the other classes, and above all in the overall ranking, the decision will only be taken at the final motocross. Class-wise, the drivers are left with a mass start on the slopes and have to drive the best lap time in the seven rounds.