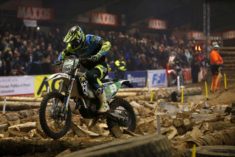 After eight months without the intense battles, the highs and lows, the victories and the crashes…the FIM Maxxis SuperEnduro World Championship is finally back this Saturday, December 9 at the Tauron Arena in Krakow (Poland)!
Can double World Champion Colton HAAKER (USA – Husqvarna) hold off the growing number of top guns present this season? This is the big question ahead of the opening round of the season…
The FIM and Polski Zwiazek Motorowy (PZM) have entrusted the opening of the SEWC 2018 to the Lodzki Klub Motorowy and the “Sport Up” promotion agency for the second year in a row. After the resounding success of 2017 when the Tauron Arena was sold out (13,000 spectators), Krakow’s indoor events hall was added to the calendar again this season without hesitation.

Just like last season, Tomasz GAGAT and his Sport Up promotion team decided to put together another round in Krakow close to the home town of Taddy BLAZUSIAK (PL – TM). The Tauron Arena, with a capacity of more than 13,000 seats, opened in May 2014 and has already hosted many important events, such as the 2014 Men’s World Volleyball Championship as well as the European Championship. Men’s Handball in 2016, the Champions League Men’s Volleyball 2015-2016, and of course the opening of the 2017 SuperEnduro season with the poignant farewell of the (then retiring) local hero; Taddy BLAZUSIAK!

Krakow, the second largest city in the country, is located in southern Poland. Krakow remains, for many, the scientific and cultural centre of the country, with its traditions and its history of over 1000 years. The city also boasts the Jagiellonian University, which is the second oldest university in Central Europe.

The Tauron Arena, despite being built just three years ago, also has a rich history and as the SuperEnduro returns for another year the crowd will be overjoyed to welcome back not only this sport, but also their hero Taddy BLAZUSIAK!

Who can challenge HAAKER?

This season, the list of favourites for the title is a long one! Indeed, there are no fewer than five riders who have shown their ambition to win the world crown. Of course, reigning Champion Colton HAAKER is the big favourite to retain the title, but he will have to be at his best to win a third championship in three years, with more competition than ever before.
Starting with the 2017 runner-up Alfredo GOMEZ (E), the new team-mate of the Californian Husqvarna rider, who finally tasted the joys of victory last season, and will hope to bridge the gap which has so far separated him from the title.
We cannot overlook Jonny WALKER (GB – KTM), who seems to have worked hard during the off-season in order to attack in his quest for the crown which has eluded him for so many years…
But HAAKER’s most dangerous rivals will likely be Cody WEBB (USA – KTM) and Taddy BLAZUSIAK (PL – KTM). The American has just won his third Endurocross title after many fierce clashes with HAAKER and it is now common knowledge that this has created a certain amount of animosity between the two Californians!
On the other side of the orange team, King BLAZUSIAK returns to action after announcing his retirement a year ago at the end of a “dream” evening in the Tauron Arena. No doubt the factory KTM rider has not come back to make up the numbers – he is here to win!
Behind this quintet, we will follow the development of the promising young talents; Manuel LETTENBICHLER (D – KTM), Benjamin HERRERA (CL – TM), Billy BOLT (UK – Husqvarna) and Blake GUTZEIT (ZAF – Yamaha) who represent the new wave of SuperEnduro contenders. And we will enjoy the return of numerous EnduroGP riders led by Alex SALVINI (I – Beta), Danny MCCANNEY (GB – Gas Gas) and Victor and Cristobal GUERRERO (E – Yamaha)…
Keep an eye on the outsiders also, such as Eloi SALSENCH (E – Beta) or Joan Pau SEGURA (E – KTM) who have already proved their credentials in this Championship by finishing in the Top 10 for two seasons.

In view of his end of season form last year (3rd behind HERRERA and GUTZEIT) it would be tempting to say that Max VIAL (F – Husqvarna) is the great favourite in the Junior category. But, even if though Frenchman has certainly progressed, he will have to face some top riders in 2018 such as Ignacio FERNANDEZ (E – Sherco), also very strong last year, Kyle FLANAGAN (ZAF – Yamaha), William HOARE (UK – KTM) and the German Kevin GALLAS (Husqvarna).
The world of SuperEnduro will also discover Matteo CAVALLO (I – Beta). 4th in the Junior category in EnduroGP in 2017, the Italian has a lot of talent and a speed that will bring him close to the front.
Finally, note the strong contingent of riders from Northern Europe led by Mathias MARTINSEN (NOR-KTM) and Tobias KARLEN (SWE – Husqvarna) and Eastern Europe with Teodor KABAKCHIEV (BG – KTM), Norbert ZSIGOVITS (H – KTM) and Oskar KACZMARCZYK (PL – KTM).

Finally, in the European Cup, after the withdrawal of Mike HARTMANN (D – Husqvarna) and Marcel TEUCHER (D – Husqvarna), the title race looks uncertain even if some favorites seem to stand out such as Jonathan PEARSON (GB -KTM), Adrien JACON (F-KTM) and Tim APOLLE (D – Husqvarna).
But riders like Matteo ROSSI (I – Husqvarna), Alex GRAU SANZ (E – Gas Gas) or Robin RSA HOLTMEULEN (NL – KTM) could also make their mark…

The 2018 FIM Maxxis SuperEnduro World Championship is wide open. HAAKER will have a lot of competition and his rivalry with WEBB could take on a new level, while BLAZUSIAK is going to thrill his home crowd, and will want to enter in at the top of the 24MX leader board like last year!
See you on Saturday December 9 at the Tauron Arena in Krakow (Poland) from 16:00, where the stars of the SEWC will meet for unpredictable, breathtaking races and an even bigger show!
If you do not have the chance to be there, head to www.superenduro.org from 19.00 to follow this first round LIVE with our new channel; EnduroTV!