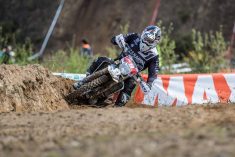 The Comeback of SALVINI!
It was a beautiful opening day of the Spanish GP, not only from the point of view of the weather but also from a sporting aspect. Day 1 of the Spanish Grand Prix held in the world famous city of Santiago de Compostela was just as enthralling as we’d hoped… and the chilly conditions on the start line did little to cool the fiery ambitions of the EnduroGP elite.

In high spirits due to his Friday night Super Test win, Alex SALVINI (I – Husqvarna Zanardo) continued to shine throughout Day 1 and took top honours in the top category (EnduroGP) and also in the E2 class. Yet he had to work hard to hold off the defending champion Steve HOLCOMBE (GB – Beta), and the pair had an incredible duel right up until the mid-race point. But the factory Beta rider lost a huge amount of time in a very wet section of the Cross test on lap 2, where he had to drain his airbox and replace his air filter! The rider with the Number 1 plate then resumed the race after a long stop of over one minute, and he was plunged into the depths of the rankings. The Brit then started a great comeback which put him back into 6th place overall at the end of the day.

HOLCOMBE Swamped…
Alex SALVINI stayed focused on the victory and he took it emphatically after a lot of consistency throughout the day. This emotional win confirms “Rocky” has returned to the forefront after two difficult seasons. But the rider from Bologna still had to keep a close eye on the two very pacy Yamaha Outsiders riders, Loïc LARRIEU (F – Yamaha) and teammate Jamie MCCANNEY (GB). Marc BOURGEOIS’s two protégés seemed well on their way to accompanying SALVINI on the podium before both made mistakes on the last Extreme Test! This double mistake meant Finland’s Eero REMES (TM) inherited a superb second place in the EnduroGP (scratch) category despite also losing quite a lot of time in a quagmire of Cross Test 2). This allows REMES to strengthen his leadership position in the Championship. On this wet Galician terrain, the British riders felt very comfortable and Danny MCCANNEY (GB – Gas Gas) was able to take an great 5th place. The young 2017 Junior World Champion, Brad FREEMAN (I – Beta Boano) also earned a remarkable 7th place among much more experienced riders. A determined Davide GUARNERI (I – Honda Red Moto) finished 8th overall, while Antoine BASSET (F – Gas Gas) and Matthew PHILLIPS (AUS – Sherco) completed the Top 10. Just outside the Top 10 was Christophe NAMBOTIN (F – Gas Gas), on a terrain which was not to his liking.

Jamie MCCANNEY (Yamaha) confirmed that he will be the man to beat this season in E1 with this first victory today in Santiago, but Brad FREEMAN (Beta) and Davide GUARNERI (Honda Red Moto), 2nd and 3rd, also showed their potential in the class. Antoine BASSET 4th and Victor GUERRERO (E – Yamaha) 5th, also put in good performances.

For Alex SALVINI taking a double win (EnduroGP & E2) was important for showing his rivals that he is undeniably one of the main contenders, even though Eero REMES is still looking strong after switching to the mid-size category. Loïc LARRIEU also seems able to keep the pressure on SALVINI and REMES, while Matthew PHILIPPS (Sherco) 4th will work hard tomorrow to be in contention for the win. It was also a strong Day 1 for Thomas OLDRATI (I – Honda Red Moto), who took a great 5th, just in front of a consistent Deny PHILIPPAERTS (I – Beta Boano).

Victories for both MCCANNEY Brothers!
Danny MCCANNEY (GB – Gas Gas) proved his speed and experience in E3, scoring a valuable 20 points with his victory, in front of the unlucky Steve HOLCOMBE who was pushed back to second position in class, ahead of Christophe NAMBOTIN who completed the E3 podium. Fellow Frenchmen, Romain DUMONTIER (F – Yamaha) and Anthony GESLIN (F – Beta) also performed well.

There was also a thrilling battle in the Junior class, with a number of young stars putting in excellent test times, with race pace worthy of the Senior classes. Yet it is with a undeniable disappointment that we report more misfortune for the talented Swede, Mikael PERSSON (KTM), who had returned to the world circuit following a serious illness last summer. Quick and strong, PERSSON seemed to be on course for a dominant win, but while the battle was raging with Matteo CAVALLO (I – Beta Boano), the Scandinavian made a mistake on a tree root and looks to have broken his hand. A very tough blow for this talented youngster, who seems to be plagued with bad luck!
It was the 2017 Youth World Champion, Andrea VERONA (I -TM) who took an impressive victory in the newly created J1 category, where he will likely battle it out all season with Kirian MIRABET (E – Honda) 2nd today, Jean Baptiste NICOLOT (F – Yamaha), 3rd, and the Belgian hopeful Antoine MAGAIN (B – KTM),4th.
After the retirement of PERSSON, it was the Italian Matteo CAVALLO (I – Beta) who held his nerve and took a great win in the J2 category, with a good margin over a returning Jack EDMONDSON (GB – Sherco), and Enric FRANCISCO (E – KTM). While Joe WOOTTON (GB – Husqvarna) made a promising start as he finished 4th ahead of Davide SORECA (I – TM) in J2.

GRELSSON Steps Up…
Didier VALADE, manager of the Sherco Academy team, thought he would win the Youth 125cc class thanks to his talented young Belgian driver Matthew VAN OEVELEN (Sherco) who, throughout the 7 hours of racing, delivered a superb battle with Sweden’s Joakim GRELSSON (KTM), the Chilean Ruy BARBOSA (Husqvarna) and the rookie from New Zealand, Hamish MACDONALD (Sherco). But in the end top honours, by just a few seconds, went to the promising Scandinavian Joakim GRELSSON in this category of more than 24 riders, full of talent and motivation.

Steve HOLCOMBE, who for many people was the favourite this year, has endured a tricky start to the season, made worse by the speed of SALVINI, REMES, LARRIEU and the MCCANNEY brothers …
But it’s hard to draw too many conclusions as it could be all change again for Day 2 of this exciting Spanish Grand Prix – especially as rain is expected!

What They Said:
Alex SALVINI: “I am very happy with this victory … my first win in 3 years! I worked very hard this winter and the work has paid off with this success, which just increases my motivation!”

Steve HOLCOMBE : “I am very frustrated today. I rode well but it is what it is, and we can’t do anything about conditions … tomorrow will be another day!”

Eero REMES : “Finishing second really pleases me especially after I went “swimming” in Cross Test 1! It’s a good race with a lap full of quality and beautiful specials test.”

Christophe NAMBOTIN : “I’m a bit disillusioned…today was not my day! Too many mistakes, crashes, and issues with bike setup … it will be better tomorrow!”

Jamie MCCANNEY : “I’m mainly focusing on the E1 category without looking at the EnduroGP results. This is my main goal and winning today gives me a lot of motivation and proves my hard work is paying off. But it’s still a long road to the title.”

Danny MCCANNEY : “Obviously winning here in Spain and bringing this success to Gas Gas is great. I’m very happy with this victory.”