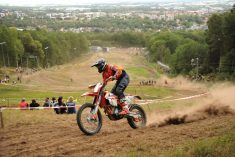 The evening before, the Frenchman Thomas Dubost had already laid the foundation for his day’s victory, with a narrow victory in the prologue: In the end, the KTM-rider was eight seconds ahead of Ronny Kytönen from Finland, who is also a junior, but in the 125cc class! Kytönen took second place in the very last special stage, where he managed to take eleven seconds off the Dubost countryman, Hugo Blanjoue: Thus the class winners of the three different junior classes were, all together on place 1-3 in the overall standings!

Local hero Albin Elowson (also a junior) retired already after a crash in the lead in the first round.

The best non-junior was the Italian Alessondro Battig, who has been leading the championship so far: The Kawasaki rider finished sixth overall and won the class of the four-strokes over 250 cc.

In the women’s singles, the Finn Sanna Kärkkäinen won again ahead of the two Swedes Emelie Karlsson and Hanna Berzelius.

Among the seniors, the Swede Anders Eriksson won the day as guest entrant ahead of Sebastian Krywult from Poland, who continues to lead the championship. Eriksson, who lives in the Skövde region and runs a motocross school, had been world champion seven times between 1995 and 2003.

With a total of 160 participants from 13 different countries, the parc ferme was filled with respectable numbers.

The prologue the evening before was simply evaluated as the first special stage of the first day of driving and was actually so short that there were no evaluation advantages. But more than 1,000 spectators from the city of Skövde took the opportunity to take a close look at enduro sport.

The main focus on Saturday was of course the crosstest on the ski slope, which was almost completely overlooked.