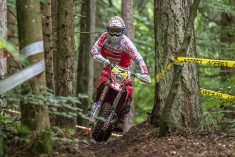 The GP of France Returns !
After two years of absence in France, the FIM Maxxis Enduro World Championship is back this weekend for the penultimate round of the season!
The “Bleu Blanc Moto” circuit of Methamis, in the department of Vaucluse, very close to Carpentras, is where the stars of EnduroGP will face each other.
“I want to applaud the Moto Club Mazanais, who took up the challenge of organising a French Grand Prix in less than 4 months following the controversial defection of the British organiser!” Says Bastien BLANCHARD (ABC Communication). Because indeed, the MC Mazanais and its president Renaud LAFONT, went all out to ensure that the French fans of EnduroGP would enjoy a great race after waiting for almost two years!

For this seventh round of the season, the Moto Club Mazanais has concocted a special event in a format already known to EnduroGP regulars, since it will be an Enduro Sprint on Saturday and a Cross Country on Sunday…
Bastien CONSTANT, secretary of the MC, tells us more: “As soon as the cancellation of the UK GP was announced, we quickly decided with the advice of Greg GILSON, to propose an event around the framework of the ‘Endurance of Methamis’ race to replace the missing round! Our “Mazanaise Round”, which will celebrate its 25th edition, will take place on Sunday morning before the two and a half hour Cross Country race for the World Championship riders. But before that, the stars of the EGP will also ride on Saturday in the form of an Enduro Sprint with two special tests in the programme: a Maxxis Cross Test and an Enduro Test. Unlike a classic Enduro Sprint, riders will go from one test to another via a small link and will complete 5 laps with a Time Control at the paddock. At the end of these 5 laps, they will have to compete on the Super Straight, a special which is 300 metres long with many obstacles. This should give us some nice duels and an exciting way to find out the winner of the day!”

As you can imagine, this Grand Prix of France will be a particular format because it would be almost impossible for the organisers to offer a ’traditional’ Enduro in just 4 months. But the fact remains that this event will be very interesting and exciting with lots of challenges for the riders!

Geographically, Méthamis is a small town located in the heart of the Provence-Alpes-Cote d’Azur region, at the foot of the famous Mont Ventoux. The circuit “Bleu Blanc Moto” is a very good area for the practicing Enduro… and that will ensure a beautiful course and a spectacular show during these two days of racing!

Make or Break for SALVINI?

As expected, the Acerbis Grand Prix of Italy, which took place three weeks ago, was a real turning point in the 2018 season… to the detriment of the hero of the first part of the year in EnduroGP, Alex SALVINI (I – Husqvarna). His mechanical failure (caused by water in the fuel) on Saturday relegated him to more than 16 points behind Steve HOLCOMBE (GB – Beta).
This weekend will be very important for the Italian, who must reduce the gap on the reigning EGP World Champion before the final round in Germany! But it will not be easy considering the form shown by the Brit at the previous round in Edolo (Italy)…
This Grand Prix of France will not be reduced to a simple duel between HOLCOMBE and SALVINI however, since Brad FREEMAN (GB – Beta Boano), Eero REMES (SF – TM), Jamie MCCANNEY (GB – Yamaha) and Loïc LARRIEU (F – Yamaha) have also proved that they could aim for the podium or even the day victory in the top category!
You also can’t rule out Christophe NAMBOTIN (Gas Gas), Antoine BASSET (Gas Gas), Christophe CHARLIER (Beta) or Anthony GESLIN (Beta), who have been strong all season but will be even more so in front of their home crowd!
This 7th round promises a great spectacle in EnduroGP, with a huge battle for the victory, and many riders able to get involved in the SALVINI/HOLCOMBE fight.

In Enduro 3, Steve HOLCOMBE will not be feeling the pressure that he has in EGP, now 30 points ahead of NAMBOTIN, he should be able to resist any charge from the Frenchman and get closer to the title… He could even be crowned in France if things went wrong for NAMBOT ‘and his teammate Danny MCCANNEY (GB – Gas Gas), who is 38 points from the factory Beta rider.
Especially since MCCANNEY will have to beware of Anthony GESLIN. In great form in Italy, the Basque will certainly want to confirm his two podiums and get closer to the factory Gas Gas rider in the provisional rankings…
Keep an eye on another Frenchman, Romain DUMONTIER (Yamaha), who has often shone in front of his home fans in previous years.

HOLCOMBE & FREEMAN with the Upper Hand…

In the Enduro 1, Brad FREEMAN also has a comfortable lead since he is 24 points ahead of his compatriot Jamie MCCANNEY. But in Enduro, nothing can be guaranteed and everything can change at any time. This is why the Beta Boano rider cannot relax or risk seeing MCCANNEY make a strong come back in the final Grand Prix.
Behind the two Brits, the French public will hope for another solid performance by Antoine BASSET that could allow him to secure a place on the final podium of Enduro 1!
But keep an eye out for Eemil POHJOLA (SF – Gas Gas) and Manuel MONNI (I – Suzuki), who are capable of podiums, just like Davide GUARNERI (I – Honda RedMoto) who marked his return in Edolo, after 4 months of absence, with two excellent fourth places…

On the side of E2, Alex SALVINI limited the damaged following his DNF Saturday in Italy. The Italian is now 20 points ahead of REMES and 21 ahead of LARRIEU. The pressure is on the shoulders of these two rivals who must work hard to put the Jolly Racing Team rider in trouble and narrow the gap, if they want to keep their chance of title in Germany in mid-October…
Thomas OLDRATI (I – Honda RedMoto), has been on great form for the last few Grand Prix, and he will aim once again for the podium in the category…
Keep a look out for Christophe CHARLIER, hero of a whole people last year with his double ISDE-MX Nations crowns, who will be highly anticipated at his first ever EnduroGP race in France! Especially since he will certainly aim for 5th place in the provisional rankings, currently occupied by Deny PHILIPPAERTS (I – Beta Boano).

In the Under23 class, Matteo CAVALLO (I – Beta Boano) still dominated in Italy three weeks ago, but with the X-3 rule (the three worst results do not count), the Italian is 10 points ahead of compatriot and rival Andrea VERONA (TM). So it’s not all decided yet for CAVALLO!
Although there’s a big gap back to third place it is nevertheless an exciting battle, since the two factory Sherco CH Racing riders, Theo ESPINASSE (F) and Jack EDMONDSON (GB), are separated only 5 points, namely, 89pts for the Frenchman and 84 for the Brit.
On top of that, these two riders have the weapons to come and fight with the two Italians and could well shake up the standings. There should be an advantage for ESPINASSE who will be pushed by his public!
Watch out too for Antoine MAGAIN (B – KTM), Kirian MIRABET (E – Honda) and Joe WOOTTON (GB – Husqvarna).

In the J1 class, VERONA, with the X-3, is only 10 points ahead of Théo ESPINASSE and 20 ahead of Antoine MAGAIN. This GP of France should therefore be worth its weight in gold for this category. For his part, CAVALLO will still have to score big points in J2 to be crowned on the first day in Germany. Indeed, the protégé of Jarno BOANO has 20 points ahead of EDMONDSON and 28 ahead of WOOTTON.

Finally, in Youth 125cc, everything is still open! With the X-3 rule also in this category, Ruy BARBOSA (CL – Husqvarna), the current leader, is under the threat from three riders: Hamish MACDONALD (NZ – Sherco), Matthew VAN OEVELEN (B – Sherco) and Dan MUNDELL (GB – Sherco). The Sherco trio are on top form at the end of the season and could deprive the Chilean of his title dream in the final straight. Completely at ease in Italy, MACDONALD seems to be the one who can give the most trouble to BARBOSA. But the Jolly Racing Team rider will not only be able to focus on the Kiwi, he needs to watch out for MUNDELL and VAN OEVELEN too… The task will be tricky for BARBOSA!

This 7th round promises to be all out and exciting in all categories and it will be crucial to the outcome of the final round that will take place in mid-October in Rudersdorf, Germany. See you on Saturday morning at 09:00 at the circuit “Bleu Blanc Moto” for a Grand Prix of France which will be highly anticipated by the thousands of French fans of Enduro…