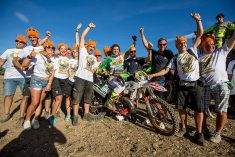 CAVALLO, First World Champion of 2018!
After four intense months for the Moto Club Mazanais and Gils’on Tracks to set up, at the last minute, this Grand Prix of France following the controversial defection of the British GP organisers, D-Day has arrived! And this first day of racing demonstrated all the qualities, seriousness and professionalism of the organisation headed by Bastien CONSTANT and Greg GILSON…

In return, the top guns of the World Championship gave them a show in the two special tests concocted by the MC Mazanais and also in the mad ‘Super Straight’ that you could follow Live on the EnduroGP Facebook page. Where you can also see the coronation and celebrations of the Beta Boano rider, Matteo CAVALLO (I) in Junior!

Jarno BOANO and his team had done all the calculations before arriving in Méthamis this weekend and the deal was simple; if Andrea VERONA (I -TM), biggest rival of CAVALLO, won the day, it was enough for the Boano rider to finish 3rd and still be crowned! But despite this cushion the Italian attacked from the morning onwards to quickly beat his rival and compatriot and head for the 2018 Junior title, a title well deserved in view of his amazing domination this year! Behind CAVALLO, it was Joe WOOTTON (GB – Husqvarna) who, at the end of the twelve stages on Saturday, took the second step of the podium in front of VERONA. Side by side with the new World Champion in the first two laps, the Frenchman Theo ESPINASSE (Sherco) had to settle for fourth place ahead of Kirian MIRABET (E – Honda) and Jack EDMONDSON (GB – Sherco).

SALVINI Has the Last Word!
In EnduroGP, while Steve HOLCOMBE (GB – Beta) started the day very strongly, building a gap of more than 18 seconds ahead of Brad FREEMAN (GB – Beta Boano) and Alex SALVINI (I – Husqvarna), he was unable to resist the crazy rise of his Italian rival. After two intense duels in Saturday’s closing Super Straight, “SALVO” snatched the win by only 71 hundredths of a second! The Jolly Racing Team rider pushed hard to keep himself just 14 points behind HOLCOMBE in the ultimate title fight. FREEMAN completed the podium, but he had to fight hard at the end of the day to keep Finland’s Eero REMES (TM) behind him by just 4 seconds. Loïc LARRIEU (F – Yamaha) closed out the Top 5. Also not the great performance of Wild Card Yohan LAFONT (F – Honda ORC) who was in the Top 15 overall.

In addition to the EnduroGP class, SALVINI also took victory in the Enduro 2 class and stretched his advantage over Eero REMES and Loïc LARRIEU a little more. Behind this trio, who have taken many podiums this year, Thomas OLDRATI (I – Honda RedMoto) took another fourth position that confirms his good form at the moment. He left no chance for Deny PHILIPPAERTS (I – Beta Boano) who finished 5th, almost 2 minutes behind the 2008 Junior World Champion. Christophe CHARLIER’s hard season (F – Beta) continues. After a good start with times in the Top 5 of EnduroGP, the Corsican had to give up with an electrical problem…

In E1, Brad FREEMAN grabbed his 6th victory in a row and consolidated his place at the top of the category. He is now 26 points ahead of his compatriot Jamie MCCANNEY (GB – Yamaha). Fighting hard, the Outsiders Yamaha rider injured his hand and dropped his pace, leaving the way open for the Beta Boano rider. This time, we do not find Antoine BASSET (F – Gas Gas) on the podium… After achieving eight podiums in a row, the Frenchman could not resist the speed of Davide GUARNERI (I – Honda RedMoto) as the Italian completed the podium. Yohan LAFONT, impressive today, took 5th place.

Fresh Junior World Champion Matteo CAVALLO also won the J2 victory ahead of Joe WOOTTON and Jack EDMONDSON while Andrea VERONA climbed on the top step of the J1 podium on Day 1 ahead of Théo ESPINASSE and Kirian MIRABET.

Finally in Youth 125cc, Ruy BARBOSA (CL – Husqvarna) set the record straight after the disappointment of the Italian Grand Prix. The Chilean won the day by more than 13 seconds ahead of Dan MUNDELL (GB – Sherco). Much more comfortable in the mud, the New Zealander Hamish MACDONALD (Sherco) could not resist the onslaught of BARBOSA and MUNDELL and even the Spaniard Gerard GOMEZ (Sherco), who climbs onto the podium, 9 seconds ahead of MACDONALD. A nice performance from Didier VALADE’s protege at Sherco Academy, Robin FILHOL (F) who completed the Top 5.

This first day has been indecisive in several categories but equally it brought us the first World Champion of the 2018 season: Matteo CAVALLO! With the dust, the Moto Club Mazanais and the FIM are currently thinking about a potential plan B for the cross-country race scheduled for tomorrow. More info will be known soon. But we can already say a big “hats off” to the Moto Club and Gils’on Tracks for taking up such a challenge!

Matteo CAVALLO : “It’s wonderful! It’s been three years since I started in the Enduro Championship and every year I have progressed! Being World Champion three days from the end of the season will allow me to be more calm now. I already can’t wait to start riding in the EnduroGP category next season!”

Alex SALVINI : “I really started the day very badly by hitting a tree on the first stage. HOLCOMBE took the opportunity to take 9 seconds out of me. In the same test, on the next lap, I made another mistake and he took 9 more! But I did not give up and I gave everything in the Super Straight – it paid off!”

Steve HOLCOMBE : “I’m disappointed, of course, especially since I was riding really well, but I still have a little advantage in general so there is no point in panicking. And today I still won in E3, so everything is fine.”

Ruy BARBOSA : “As soon as I saw the special tests, I felt that they would be suited to me! I’m glad to get back on the first step of the podium and I do not intend to let this title slip away from me after trying for the last 3 years!”