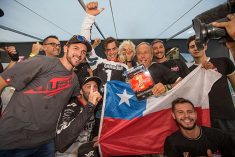 The dust finally changed the original plans of the Moto Club Mazanais on the second day of the race; after deliberation with the FIM jury, Bastien CONSTANT and his team reacted quickly to finally propose a three lap Enduro Sprint race…
And it seems that it was enough for the riders… “Six specials, it was enough today! I am dead!” confessed Jack EDMONDSON (GB – Sherco) as he returned to the Parc Fermé.

Sufficient also for Steve HOLCOMBE (GB – Beta) who increased his gap in the EnduroGP Championship on his great rival Alex SALVINI (I – Husqvarna). However, the Italian was unlucky with an electrical problem… and while he was able to finish the day, this problem made him lose more than a minute in Special Test 4. End of the race, “SALVO” salvaged a 12th position and was relegated to 30 points behind HOLCOMBE in the provisional standings! Even with SALVINI out of contention, the day was still not easy for the factory Beta rider who had to beat a very pacy Christophe NAMBOTIN (F – Gas Gas), something he was only able to do in the final special. We also witnessed a duel until the end between Eero REMES (SF – TM) and Christophe CHARLIER (F – Beta), for the final step on the podium. The Finn won the war by only 25 hundredths of a second! Loïc LARRIEU (F – Yamaha) was also targeting the podium, but he could not face down the top quartet and had to be satisfied with 5th place, just a few seconds ahead of Danny MCCANNEY (GB – Gas Gas)…

With this victory in the main class, Steve HOLCOMBE leaves with a double win in Enduro 3. But he had to face a Christophe NAMBOTIN who was keen not to let his young rival beat him in front of the French fans! The Brit will need to wait a little longer to own the World Champion’s plate. Gas Gas’ Danny MCCANNEY completed the podium and consolidated his third place against Anthony GESLIN (F – Beta), the Frenchman in top form this season but more at home in the mud than the dust. Romain DUMONTIER (F – Yamaha) took another Top 5 in front of his compatriot Jean-Charles SCHNEIDER (F – Gas Gas) and the Argentinian Cristian ARRIEGADA (Husqvarna).

The woes of Alex SALVINI, 5th, have once again shaken up the E2 category since his first pursuer in the provisional Eero REMES won the day in front of Christophe CHARLIER who finally returned to the podium after a very unlucky season so far. Loïc LARRIEU closed the podium in front of Thomas OLDRATI (I – Honda RedMoto). A special mention goes to our guest for the day, Cédric SOUBEYRAS (F – Honda) who, at his first participation in an Enduro and in honour of Mathias BELLINO (F), finished in 8th position. In the classification, SALVINI is now only 14 points ahead of REMES… The German Grand Prix will be intense for both of them!

In Enduro 1, it was once again Brad FREEMAN (GB – Beta Boano) who proved unbeatable… although not without pain! The Beta Boano rider started the day very badly by falling twice in the first special. Courageous and carrying on despite a painful shoulder, he still took victory by just 99 hundredths of a second in front of a determined Jamie MCCANNEY (GB – Yamaha). Once again, Davide GUARNERI (I – Honda RedMoto) prevented Antoine BASSET (F – Gas Gas) from getting on the podium in front of his home crowd. While Eemil POHJOLA (SF – Gas Gas), 5th, got the better of Wild Card Yohan LAFONT (Honda)!

In the Junior classes, it was thought that Matteo CAVALLO (I – Beta Boano) would relax a little after lifting the Junior World Champion’s crown the day before… nothing of the sort! Jarno BOANO’s protégé, however badly he started the day, finished in top spot once again, and setting at the same time the Scratch (best) time in all the categories combined on the last special test. CAVALLO won at the expense of a charging Joe WOOTTON (GB – Husqvarna) who shone throughout the day… Andrea VERONA (I – TM) climbed onto the last step of the Overall Junior podium in front of his teammate Davide SORECA (I) and Jack EDMONDSON!

Once again in J2 it was CAVALLO who, obviously, won. He is getting ever closer to the victory in the J2 World Cup. Completing the podium on Day 2 were Joe WOOTTON and Davide SORECA, returning from surgery. Andrea VERONA was able to win the J1 World Cup crown, one round before the end of the season. The 2017 Youth Champion has put together a very strong debut in Junior, which also saw him take victory again today ahead of Emanuele FACCHETTI (I – Honda RedMoto) and Théo ESPINASSE (F – Sherco).

Finally, this Grand Prix of France witness the crowning of a second World Champion in the form of Ruy BARBOSA (CL – Husqvarna)! The deal was simple, the talented Chilean had to win the day to be crowned World Youth 125cc Champion… “Job done” as he won the day by almost 20 seconds ahead of the Finn Roni KYTÖNEN (Husqvarna). His most serious rival for the title before today, Dan MUNDELL (GB – Sherco) had to be content with fourth place, pipped at the end of the day by one of Ivan CERVANTES’s protégés in the RFME team, Sergio NAVARRO HUERTAS. Finally, New Zealand sensation Hamish MACDONALD (Sherco) closed out the Top 5 in Youth just ahead of Gerard GOMEZ (E – Sherco).

The curtain has fallen on this particular Grand Prix of France in several aspects. But we must give a huge “hats off” to the Moto Club Mazanais and Gils’on Tracks for this wonderful weekend in the south of France and for the challenge of replacing a Grand Prix in less than 4 months! See you on the 13th and 14th of October in Rüdersdorf, Germany, for the grand finale of this 2018 season!

Ruy BARBOSA : “What a feeling! It’s amazing to say that I’m World Champion tonight … and in addition I enter the history of Enduro as the first Chilean to be crowned, what more could I ask for? Thank you very much to Franco MAYR and Jolly Racing Team for their trust in me for the last three years. Thanks also to Alex (SALVINI) for his valuable advice! It’s a dream come true!”

Steve HOLCOMBE : “I came to the track early this morning to check the special tests again. I was not really happy with my second place yesterday. The plan today was to avoid the stupid falls that cost me the victory. I did that! With the misfortunes of SALVINI, I can arrive in Germany a little calmer, even though the plan remains to win!”

Brad FREEMAN : “It was a tough day for me with two crashes in the first test. The first one was just 10 meters after the start, and the other one shook me up since I hit a tree. I have had big pains in my shoulder since then… so I can say I’m lucky and happy to leave here with a double win because Jamie deserved it just as much today.”

Eero REMES : “From the first corners I felt good today despite the broken ground and when I learned about Alex’s mechanical problems, I decided to push even more. The battle was great with CHARLIER. Now everything is still to play for in Germany and I intend to put my cards on the table.”

Christophe CHARLIER : “Really satisfied with this podium after my DNF the day before and my disappointments this season. It’s good for my mentality even if finishing second by 25 hundredths of a second behind REMES leaves me with a slightly bitter taste… “