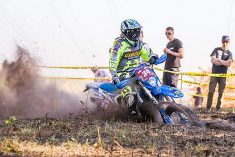 HOLCOMBE On Top of the World!
As expected after the Grand Prix of France and this domination all season, this first day of the final round of 2018 saw Steve HOLCOMBE (GB – Beta) conquer both the E3 and EnduroGP titles, and Brad FREEMAN (GB – Beta Boano) win his first senior title, becoming the World E1 Champion. Let’s look back at this day full of emotion…

Steve HOLCOMBE only needed a handful of points to win his second consecutive title in EnduroGP… but instead of just doing what was necessary, he rode brilliantly, and the Factory Beta rider took his 5th win of the year after a good battle with Brad FREEMAN. Today was confirmation of his dominance and rise to power throughout a year which started with fractures to his ribs in Spain and ended in style; riding at a very high level in the last three GPs of the season. FREEMAN, anxious to finish the job in E1, kept his compatriot honest all day in the overall and lost out on the EGP win by just 5 seconds! Behind the two stars of this day, it was Eero REMES (SF – TM) who took the 16 points for 3rd place, 9 seconds ahead of Loïc LARRIEU (F – Yamaha). Alex SALVINI (I – Husqvarna) closed out the top 5 in front of the MCCANNEY brothers, Danny (GB – Gas Gas) and Jamie (GB – Yamaha). Special mention also for the local rider Christian BROCKEL (D – KTM) who finished 15th on this first day of the Maxxis German GP!

FREEMAN, World E1 Champion!
HOLCOMBE also finished the job in E3 by sealing his 9th victory in a row, his 10th of the season. Behind him the suspense remains high for the honourary title of Vice-World Champion since Danny MCCANNEY with his second place today takes four points on Christophe NAMBOTIN (F – Gas Gas) who struggled today and must be content with 4th position. Anthony GESLIN (F – Beta) once again played his role of ‘spoilsport’ in the big category, as he once again slotted in between the Gas Gas Boys. The young Basque rider therefore took his fifth world podium of 2018! Finally, Feldt BJÖRN (D – KTM) finished in a good 5th position ahead of Romain DUMONTIER (F – Yamaha).

A third World Champion title was awarded this Saturday in the Rüdersdorf paddock. And it was another Brit holding the 24MX Leader’s Plate; Brad FREEMAN. With a lead of 28 points, the Beta Boano rider could afford to finish 5th if his rival Jamie MCCANNEY won the day… But the 2017 Junior World Champion didn’t want to take it easy and he stormed to the title as soon as possible. He quickly widened a gap on the rider from the Isle of Man and so climbed on the top step of the podium for the ninth time in a row – a domination that started on the second day of the GP of Portugal! MCCANNEY, for his part, gets closer to sealing the Vice-World Champion spot in E1, finishing second again while Davide GUARNERI (I – Honda RedMoto) had another great result following his comback from injury. The Italian took a podium in front of Antoine BASSET (F – Gas Gas) and Eemil POHJOLA (SF – Gas Gas).

In Enduro 2, the gap is narrowing between Eero REMES and Alex SALVINI after a strong victory from the Finn today. The Italian had to relent halfway through the day and he even saw Loïc LARRIEU (F – Yamaha) sneak in ahead of him! Mathematically, the official Yamaha Outsider rider still retains a very small change of the title since he is 19 points behind the Jolly Enduro Team rider. “SALVO” now has a 10 point lead ahead of REMES before the last day of this 2018 season! Behind the usual trio was Thomas OLDRATI (I – Honda RedMoto), 4th, and Deny PHILIPPAERTS (I – Beta Boano), 5th. Followed by the German trio of BROCKEL, HÜBNER (D – KTM) and VON ZITZEWITZ (KTM). Tomorrow the thousands of spectators present will be eagerly watching the E2 class to see who will win the final title of the year!

RUPRECHT, The Surprise Wildcard!
In the Juniors, the winning streak of six in a row for the 2018 World Champion, Matteo CAVALLO (I – Beta Boano) ended this Saturday in Germany. And at the hands of a newcomer in the EnduroGP paddock! It was Wil RUPRECHT (AUS – Yamaha) who relegated CAVALLO by more than 22 seconds! Invited by the team Johansson MPE to participate in this final, the Australian joined Jérémy JOLY (F) in the history books of the Wildcards victorious at their debut event. This bodes well for RUPRECHT in 2019 as it seems that Joakim JOHANSSON would like to have him for the full season. With RUPRECHT the winner and CAVALLO second, it was Joe WOOTTON (GB – Husqvarna) who rounded out the podium at the expense of Andrea VERONA (I – TM). Winner of yesterday’s Super Test in the Junior category, Tosha SCHAREINA (E – Husqvarna) took his best result of the year (5th).

Overall winner, RUPRECHT, also won the J1 category ahead of VERONA and Kirian MIRABET (E – Honda) while Matteo CAVALLO remained in charge of the Junior 2 class ahead of Joe WOOTTON and Tosha SCHAREINA.

In Youth 125cc, Ruy BARBOSA (CL – Husqvarna) proved strong again despite already having the title under his belt since France. Hamish MACDONALD (NZ – Sherco) took second on the day and looks to be on for the Vice-Champion spot against Roni KYTONEN (SF – Husqvarna) who was 3rd today, Dan MUNDELL (GB – Sherco), 4th, and Matthew VAN OEVELEN (B – Sherco), 5th.

Finally, in the Women’s Cup, Sanna KARKKAINEN (SF – KTM) moves close to the title after winning this first day of action. With the difficulties faced by the double Womens MX Champion, Livia LANCELOT (F – Honda RedMoto) and the very disappointing injury of the great favourite and triple World Vice-Champion Jane DANIELS (GB – Husqvarna), who broke her collarbone on the first lap, the Finn is now the potential winner of the Women’s Cup… Despite her difficulties, LANCELOT finished second ahead of Mireia BADIA (E – Husqvarna) and newcomer Nieve HOLMES (GB – Sherco).

This first day of the Maxxis German Grand Prix gave us three World Champions through Brad FREEMAN in E1 and Steve HOLCOMBE in E3 and EGP. See you tomorrow for a thrilling final day of the 2018 season, where we will see who out of REMES and SALVINI will win the Enduro 2 title!

What They Said:
Steve HOLCOMBE : “I’m so relieved to win this second title! The year started so badly with my rib fracture, but after the GP of Trentino I refocused and I spent my summer preparing for the last three GPs… It worked perfectly and I am very proud to be crowned EGP World Champion for the second year in a row!”

Brad FREEMAN : “So many emotions … so many emotions! It’s just amazing… I can hardly speak! We did it… World E1 Champion! It sounds so good to say it! So many sacrifices all year but it’s worth it!”

Eero REMES : “I stayed focused all day and it paid off. 10 points behind is nothing and everything could still happen tomorrow. So we will keep this action plan and we will count the points up at the end of the day…”

Alex SALVINI : “I never really found a good feeling on this terrain. I could have lost fewer points but LARRIEU got second place today and he deserves it. I will have to ride tactically tomorrow and keep an eye on the points…”