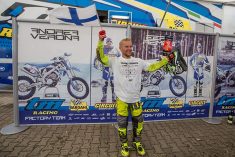 This last day of racing in 2018 offered EnduroGP fans and spectators a lot of “drama” and an intense fight in Enduro 2 where Eero REMES (SF – TM) was shockingly crowned 2018 World Champion to the detriment of Alex SALVINI (I – Husqvarna).

However, SALVINI had been well on his way to claiming the World Crown… despite brilliant starts from Eero REMES and Loïc LARRIEU (F – Yamaha), the Jolly Enduro Team rider was riding cleverly and was on course for his title. He even overtook his main rival on the second lap and therefore could’ve gone straight to his second career title. But again, bad luck got involved during a liaison section, a branch intersected the cables of the fuel injection… after receiving help from many other riders including HOLCOMBE and FREEMAN, SALVINI managed to make some repairs but arrived at the time control 31 minutes late – he was disqualified and sadly saw his title dreams fly away! REMES had only to ensure that no mechanical problems happened to him and the Finn even let Loïc LARRIEU take his first victory of the season. Eero could win the 3rd title of his career and celebrate with his TM Racing Factory team. With this victory, coupled with the DNF of SALVINI, LARRIEU took the place of Vice-Champion by just one point. Thomas OLDRATI (I – Honda RedMoto) also took advantage of his compatriot ’s troubles to get on the podium in front of Deny PHILIPPAERTS (I – Beta Boano) and the German Christian BROCKEL (D – KTM).

FREEMAN, Vice-Champion in EnduroGP!
Over in EnduroGP, Steve HOLCOMBE (GB – Beta), released from any pressure, concluded the season with another victory, more than 28 seconds ahead of Loïc LARRIEU. Brad FREEMAN (GB – Beta Boano) took the last step on the podium and confirmed his place as Vice-Champion in EnduroGP due to Alex SALVINI’s disappointment… Danny MCCANNEY (GB – Gas Gas) and Eero REMES completed the Top 5 on this last day of racing in the main category.

HOLCOMBE ended the season in style in Enduro 3 as well with his 11th victory in a row ahead of Danny MCCANNEY and Christophe NAMBOTIN (F – Gas Gas). With this 3rd place, the Frenchman still ensures the place of Vice-World Champion in E3 by just 2 points on his teammate. Anthony GESLIN (F – Beta) could not get on a second podium but still a good 4th place, which concludes a very strong season for him. Bjorn FELDT (D – KTM) rounded out the Top 5.

Same story in Enduro 1 where Brad FREEMAN, winner of the E1 title yesterday, could race without pressure and ended the year with another victory. But this time, he was not followed by the official Yamaha Outsider rider and season long rival, MCCANNEY. Instead it was Davide GUARNERI (I – Honda RedMoto) who gave his all to take second place at the expense of Jamie MCCANNEY (GB – Yamaha). Antoine BASSET (F – Gas Gas) finished 4th ahead of teammate Eemil POHJOLA (SF – Gas Gas) and Manuel MONNI (I – Suzuki).

KARKKAINEN, The New Queen of Women’s Enduro!
In the Under23 age group, there was a fascinating crossover between Matteo CAVALLO (I – Beta Boano), Théo ESPINASSE (F – Sherco), Joe WOOTTON (GB – Husqvarna), Davide SORECA (I – TM) and the surprise victor of Day 1, Wil RUPRECHT (AUS – Yamaha). For a long time, CAVALLO (4th), and the Australian (7th), fought for the victory but the pair made mistakes on the last lap and left the way free for Theo ESPINASSE (F – Sherco) to take the win! Joe WOOTTON brought home second place and Davide SORECA snatched the last spot on the box. Andrea VERONA (I – TM) completed the Top 5.

ESPINASSE also won the J1 category in front of this year’s J1 Cup Winner, Andrea VERONA, and Wil RUPRECHT. Meanwhile WOOTTON to his first win in J2 ahead of SORECA and CAVALLO.

The curtain has just fallen on a 2018 season rich in twists, turns, tears and triumphs! This year will has delivered in terms of amazing Champions and excitement until the very end. For the second consecutive year HOLCOMBE has proven to be the man to beat and he’ll hope to make it a hat trick next year – although many others will try their hand too!
Congratulations also to FREEMAN, REMES, CAVALLO and BARBOSA who put their names in the history books of the discipline and are all extremely talented Champions! Finally, a big congratulations to MC Woltersdorf who organised this season finale masterfully.

What They Said:
Eero REMES : “I’m so surprised! I still can not believe this has happened… I arrived here 14 points behind and I leave with the E2 crown. I still have a thought for SALVINI who had lots of misfortunes since Edolo. But I’m not going to complain about winning my third title!”

Alex SALVINI : “I am completely devastated… Everything was fine until this one branch destroyed everything. Even though I’m not champion, I’m proud of the heart I gave and the fight I put up. Throughout the year and despite any bad luck I always gave my all and fought hard to always come back to the top. As they say, what doesn’t kill you makes you stronger!”

Sanna KARKKAINEN : “It’s magic! Following on from awesome girls like PUY, SANZ and FRANKE… it’s a great honour. I still have a hard time understanding that this has happened. I stayed focused all weekend and it paid off. I’m really very happy to win this cup!”

Steve HOLCOMBE : “We’ll say that I did not go to bed very early so the start of the day was quite difficult! But I managed to refocus myself to finish the season in style. I’d still like to spare a thought for Alex who broke down again. We all tried to help him but unfortunately it did not work. I know he will recover and come back even stronger.”

Loïc LARRIEU : “Finally! After a season with injuries, mechanical problems, concentration problems, I finally managed to put everything in place to get my first win of the season. It was a long time coming but it feels good and I hope I can work on it for 2019!”