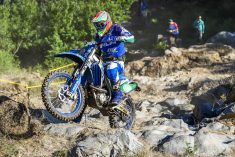 Australia extend their lead at the close of day three of the FIM International Six Days Enduro (ISDE) as the race in Chile reaches the midway point. Delivering another winning result, Australia further strengthen their advantage in the ninety-third edition of the FIM ISDE over the United States and Italy.

Marking the midway point in this year’s FIM ISDE in Chile, the third day of racing saw competitors face a new course and a fresh set of special tests. Moving inland to the Limache region, a one-hundred and fifty kilometre loop of rocky terrain awaited all riders. With the lap ridden twice, it would prove yet another long and demanding day in the saddle for all, as high temperatures and increasing dust took their toll on riders.

There was no change at the head of the FIM World Trophy team competition with Australia once again leading the way. Proving extremely comfortable in the loose and rocky terrain, they were comfortably fastest on day three.

“It’s been another good day for Australia,” told Milner. “To reach the midway point in the race with more than a three-minute lead is a big confidence booster – despite losing Lyndon Snodgrass (KTM) as a retirement yesterday.”

“I’m enjoying it out there, myself and teammate Daniel Sanders (Husqvarna) are pushing the pace and along with Taylor Robert (USA – KTM) it’s proving a close battle for the individual result.”

Although losing more ground to Australia, the United States hold station in second, while Italy remain third. Defending champions France, in fourth place, picked up their pace on day three to move to within one-minute and twenty seconds of Italy. Highlighted by Christophe Nambotin (FRA – Gas Gas) in fifth, three of the nation’s riders ended day three inside the top twelve.

With Spain, Portugal and the Czech Republic fifth, sixth and seventh respectively, it was a difficult day for Chile who slipped to eighth after losing team captain Benjamin Herrera (Beta).

In the battle for the final step of the podium, France are third, but face a new challenge from host nation Chile. Finishing third fastest on day three, Chile jump to fourth overall and are now within striking distance of the French.

“I think we are beginning to find our pace now,” said Chile’s Ruy Barbosa (Husqvarna). “We’ve pushed really hard today and it showed in the results. With lots of support from our home fans we will try to close the gap to France tomorrow.”

Claiming their third day win in Chile, Australia continue their relentless pace in this year’s FIM Women’s World Trophy. Comfortably faster than their rivals, they enter the second half of the race looking favourite to collect their sixth consecutive victory.

Unable to answer the pace of the leaders, the United States are six minutes behind the Australians, but enjoy a six-minute cushion over Spain in third. France are fourth, with Sweden completing the top five.

Day four will see competitors complete the same course and special tests as day three, along with the start of competition for the Vintage Trophy.