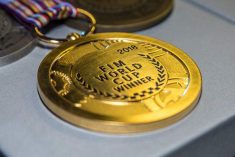 For almost two years Bastien & Alain BLANCHARD (ABC Communication) have worked to change the Maxxis FIM EnduroGP World Championship, hoping to make it more accessible for privateer riders and to substantially increase the number of participants.
Their latest project was validated by the FIM Enduro Commission at the beginning of the Autumn under the leadership of its new director Mr John COLLINS and was accepted by the FIM Board just few days ago: the Enduro Open World Cup is coming!

Completely separate and in addition to the EnduroGP classes – E1, E2, E3, Junior and Youth 125cc – this Enduro Open World Cup will allow privateer or local ‘wildcard’ riders to come and ride along the same lines of the stars of the discipline!

On the programme are three new open categories:

This Enduro Open World Cup is:

– Open to everyone from the age of 16
– Will take place at all 7 Grand Prix of the 2019 World Championship season.

However:
– Only the 8 best day results of each rider will be counted. It will therefore be possible to win one these three FIM World Cups without having participated in every round!

ABC and the FIM will also be offering a very low entry fee of only 120€ per race (Transponder Fee included).

This new category will also be closely managed by Race Direction to take into account the technical abilities of the participants. Indeed, the Open class will complete one lap less than the EnduroGP riders and some route deviations will be put in place for the more technical and difficult parts of the liaison as well as on some special tests.

Bastien BLANCHARD, CEO of ABC Communication: “It was imperative to find a way to get more riders back into the Maxxis FIM EnduroGP World Championship. These three new FIM World Cups should allow many passionate privateer riders, who may not be able to finance a season of 7 or 8 GPs, to ride on the international stage. Enduro has always been about the riders and their dedication, and that is why the FIM were pleased to validate our new project, approving the addition of three new World Cups!”

John COLLINS, CEN Director: “The FIM is pleased to announce the introduction of the Enduro Open Class and its associated categories into the Maxxis FIM Enduro World Championship. The aim is to encourage riders who for many reasons are not able to contest the series at the highest level, but would still like to experience a traditional Enduro World Championship Event, riding with the Champions, particularly when Events are in their own or countries within reasonable travel distance.”

The long-awaited opening of the FIM Enduro Open World Cup will take place from the German GP on March 23rd and 24th in Dahlen.
Don’t miss this new series, which will of course benefit from the excellent organisation of EnduroGP races as well as its extensive media coverage!