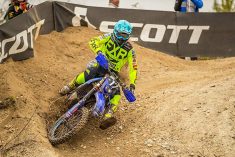 Just over a month after the brilliant season opener in Dahlen (Germany), which saw Steve HOLCOMBE (GB – Beta) return straight to the top of the podium, the EnduroGP season will resume this weekend in Northern Portugal, in the small town of Valpaços.

A Keen Moto Club
The Usprigozus Vilarandelo club, run by Fernando REIS and assisted by Pedro MARIANO and the FMP, have put a lot of heart and effort into organising their first international level race. This Moto Club, founded in 2002, has plenty of experience since they have organised several rounds of Portuguese Enduro Championship as well as many TT Rally Raids. For this second round of the Maxxis FIM EnduroGP World Championship, Usprigozus Vilarandelo have drawn up a course of about 50km which the stars of the sport will have to tackle three times each day. Meanwhile, the brand new Champion Lubes Enduro Open World Cup will complete two laps. The paddock will be located at Pavilhao Multiusos de Valpaços. From there, the riders will head for the Technomousse Xtreme Test near the Intermarché shopping center in Valpaços, before taking on the Champion Enduro Test located at Lama Cerdeira, and finishing the lap with the Maxxis Cross Test at the Cabeço MX circuit. Friday Night’s Akrapovic Super Test will be just a stone’s throw from the paddock at Pavilhao Mulitusos.

Valpaços will become a centre of Enduro action this weekend and the one hundred committed riders will enjoy a Grand Prix of Portugal that is both physical and technical, in front of thousands of enthusiastic fans…

MCCANNEY & FREEMAN, Can They Stop HOLCOMBE?

Already a double EnduroGP Champion at just under 25 years old, Steve HOLCOMBE (GB – Beta) is hungry for a third title. The proof is in his unstoppable double victory in Germany just over a month ago. Enduro fans the world over are wondering who is capable of stopping the Brit from achieving this treble…
His fellow countrymen, Danny MCCANNEY (GB – TM) and Brad FREEMAN (GB – Beta Boano), seem to be the mostly likely to relegate HOLCOMBE, especially as they’ve been challenging him in the Italian Enduro Championship this season.
But the likes of Loïc LARRIEU (F – TM), Alex SALVINI (I – Honda) and Eero REMES (SF – Yamaha) all have the skills to give the factory Beta rider a run for his money in the EnduroGP class.
We could also see riders such as Thomas OLDRATI (I – Honda), Christophe CHARLIER (F – Honda), Matteo CAVALLO (I – Sherco) and Davide GUARNERI (I – Honda) mix it up in the Top 5.

MCCANNEY and NAMBOTIN will also aim to beat Steve HOLCOMBE in Enduro 3, but the “Beast of Exmoor” also dominated this class in Germany, so the Manxman and the Frenchman will have to bring their A-game in Portugal.
Meanwhile, David ABGRALL (F – Beta), will seek to defend his place on the podium in the ‘big’ class. For this, he will have to resist the onslaught of Anthony GESLIN (F – Beta) and others such as Alex SNOW (GB – Gas Gas)…

In Enduro 1, Brad FREEMAN came out strong in Germany. But behind him there’s a fierce fight between the Italian trio Thomas OLDRATI, Davide GUARNERI and Matteo CAVALLO, who are all tied for second place with 30 points, 10 points behind the Beta Boano rider. In Portugal it will be interesting to see if one of these three can take the upper hand and stand out as FREEMAN’s great rival.
We will also see Rudy MORONI (I – KTM), Kirian MIRABET (E – Honda) and Patrik MARKVART (CZ – KTM) at work in E1, while Jonathan ROSSE (CH – Yamaha) makes his return to the World Championship after a few years of absence.

At the opening round of the season Loïc LARRIEU took advantage of the mistakes made by two of his biggest rivals, REMES and SALVINI, to take the lead in the E2 standings. The Frenchman is now 9 points ahead of Chile’s Benjamin HERRERA (Beta), 11 points ahead of SALVINI, and 15 ahead of REMES…
The Italian and the Finn must act quickly in order not to let the factory TM rider pull away, while a consistent HERRERA will try to secure his first E2 podium.
Antoine BASSET (F – Husqvarna) will also seek to take advantage of the slightest mistake of one of the three heavyweights and get on the box. We can also expect to see more from Christophe CHARLIER, Giacomo REDONDI (I – Husqvarna), Joe WOOTTON (GB – Husqvarna), Edward HÜBNER (D – KTM) and Hugo BLANJOUE (F – KTM).
Portugal will also see a return to business for Davide SORECA (I – Honda), who had to miss the opening in Dahlen due to injury.

With a double victory in Dahlen, Andrea VERONA (I – TM) is the leader in the Junior category but things have not been entirely straight forward for the Italian, who had to work hard to fight off Wil RUPRECHT (AUS – Yamaha) and Theo ESPINASSE (F – Sherco)… The fight for victory will be very interesting between his three hopefuls, and every second will count!
There is also a chance of other riders, such as Jack EDMONDSON (GB – Sherco) and Enric FRANCISCO (F – KTM) getting into the mix and causing havoc at the front of the class.
It’s the same story in J1 where VERONA, RUPRECHT and ESPINASSE will go head to head to win this category, but they need to beware of Matthew VAN OEVELEN (B – Gas Gas), Thomas DUBOST (F – KTM) or Marc SANS (E – KTM) who could benefit from the slightest mistake to get on the podium.

In J2, EDMONDSON and FRANCISCO, currently tied on points, will offer a good battle for the spectators. Not to mention the 125cc Youth Champion 2018 Ruy BARBOSA (CL – Husqvarna), Léo LE QUERE (F – Sherco), Thibaut PASSET (F – Sherco), Emanuele FACCHETTI (I – Gas Gas) and Lorenzo MACORITTO (I – Beta Boano) who all have the potential to be at the front.

In the Youth 125cc class, Hamish MACDONALD (NZ – Sherco) hit his rivals hard by dominating this category for riders under 21 years old. Behind him, Matteo PAVONI (I – Beta Boano) and Claudio SPANU (I – Husqvarna) will seek to get closer to the New Zealander while battling it out between themselves…
Hugo SVARD (SF – Yamaha), Alejandro NAVARRO (E – KTM), Nathan BERERD (F – Husqvarna) and Robin FILHOL (F – Sherco), will also want to continue their apprenticeship and fight for the podium. But in Valpaços we’ll see one of the favourites for the title, Dan MUNDELL (GB – Sherco), back to fight it out. Injured in Germany, he will be at a disadvantage, but ready to take points from everyone including his Sherco CH Racing team-mate.

This second round of the championship is highly anticipated by the Portuguese fans who will be found around the three special tests throughout the weekend, but also by EnduroGP fans across the globe. The Usprigozus Vilarandelo club have prepared their very first international level race with great enthusiasm and passion, and an action-packed weekend is guaranteed!