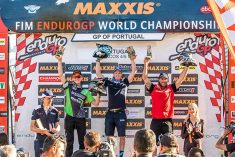 The first day of the Portuguese round of the Maxxis FIM Enduro World Championship was held under bright sunshine in Valpaços, with temperatures around 26°c. The physical condition and strength of the riders was put to the test over the course of the 7 hours and 7 minutes of riding on Day 1. The riders unanimously said has been organised very well and very professionally, and all the tests thrilled the competitors as well as the many spectators who made the trip out to watch the best Enduro riders in the world.

Steve HOLCOMBE (GBR-Beta) took on the day in his usual dominant and consistent style, and he was able to really make the difference on his favourite test: the Enduro Test, which is very long here in Portugal. Increasing his advantage with every pass through this demanding test, HOLCOMBE built up a comfortable lead. The Brit won a total of 5 tests on Saturday, making him the best ‘performer’ of the day.

The battle to accompany him on the overall podium was really superb between Alex SALVINI (ITA-Honda), Loic LARRIEU (FRA-TM), Brad FREEMAN (GBR-Beta), Danny MCCANNEY (GBR-TM) and Giacomo REDONDI (ITA- Husqvarna). At midday the Top 10 was covered by just 30 seconds.

Brad FREEMAN (GBR-Beta) struggled with the first Enduro Test of the day, where he lost 14 seconds on HOLCOMBE and fell to 3rd overall. Gradually the Beta Boano rider managed to work his way back up again by winning 3 tests. He had to give his all to finish 2nd overall.

Alex SALVINI wanted to forget the unfortunate start to the season he suffered in Germany. In a good rhythm from the beginning of the day, the Italian worked hard all day to hold on to his 2nd place overall and fight off Brad FREEMAN. It was a fantastic fight between the two riders! Even at the start of the fourth and final lap the gap was a tiny 8 thousandths of a second. Finally SALVINI conceded the 2nd place to FREEMAN, but “Rocky” was satisfied to be able to show a glimpse of his ‘real’ form.

There was a big disappointment for Loïc LARRIEU, who is forced to give up after a broken engine on his 300cc TM. The Frenchman fought for the podium for most of the day. His bike has now been fixed, and he will be keen to try again on Day 2.

4th on the day, Danny MCCANNEY had to fight against fierce opponents in the form of Christophe CHARLIER (FRA-Honda), 5th. A nice performance for the Frenchman who is riding with a broken toe. Giacomo REDONDI (ITA-Honda) finished 6th on the day and he looked impressive on the Maxxis Cross-Test.

Meanwhile, Eero REMES (FIN-Yamaha) had a difficult day; an error on the 3rd Technomousse Extreme Test lost him a lot of time. The Finn is still getting used to riding his Yamaha 450, but he salvaged 7th place.

In E1, Brad FREEMAN took another strong victory, finishing ahead of a consistent Davide GUARNERI (ITA-Honda) and an impressive Matteo CAVALLO (ITA-Sherco).

In the highly contested category E2, SALVINI took the honours in front of CHARLIER and REDONDI.

And finally, in E3, the victory naturally went to Steve HOLCOMBE, ahead of an ever fast MCCANNEY and France’s Anthony GESLIN (FRA-Beta).

Junior: VERONA Chips Away at RUPRECHT

In the Junior category, the fight was absolutely fantastic between the dicing duo composed of Wil RUPRECHT (AUS-Yamaha) and Andrea VERONA (ITA-TM). Leading all morning RUPRECHT made a small mistake in the 3rd Extreme Test. From then on, he could not do anything to fight off VERONA, with the Italian recovering strongly from bike issues at the start of the day.

After VERONA got the bike back to his liking, the Italian produced an incredible effort and managed to take over the lead at the end of the third lap! RUPRECHT held on to a handy 2nd place. 3rd overall on the day was Enric FRANCISCO (SPA-KTM) who finished ahead of Jack EDMONDSON (GBR-Sherco) 4th.

And in J2, FRANCISCO took his second win in a row after a debut victory in Germany. EDMONDSON and Ruy BARBOSA (CHL-Husqvarna) rounded out the top three.

Once again, Hamish MACDONALD (NZL-Sherco) left little chance for his opponents. He won 8 tests and finished 2nd in all the others. His winning margin was an amazing 57 seconds ahead of a fantastic Claudio SPANU (ITA-Husqvarna), who worked very hard to come back from a five second penalty. Matteo PAVONI (ITA-Beta) was 3rd in the Youth class, finishing just 7 seconds behind compatriot SPANU.

In the Champion Lubricants Enduro Open Cup, the giant from the Isle of Man David KNIGHT (GBR-TM) imposed himself on the Senior category. He won in front of Andrea BELOTTI (ITA-KTM) and local rider Fernando FERREIRA (Sherco).

Goncalo REIS (POR-KTM) was the hero of the day for the local fans! The Portuguese rider took top honours in the Open 2-Stroke category. His compatriot Joao LOURENCO (PRT-Beta) was second, and Spaniard Jorge PARADELO RODRIGUEZ (SPA-Gas Gas) third.

Steve HOLCOMBE (GBR-Beta): “It was absolutely fantastic, everything went well. Even though I had some difficulty getting myself into the rhythm this morning. I’ll be honest this kind of terrain is really not my strong point but I’m delighted to dominate today. Now i’ll rest and try to attack again tomorrow.”

Brad FREEMAN (GBR-Beta): “Steve is really on another planet, so I focused on my own battle with Salvini and it was good to fight with him. I’m tired and I can tell you it was one of the hardest days of racing in my career.”

Alex SALVINI (ITA-Honda): “What a pleasure to fight at the front again! I really want to thank my team, my bike was perfect. I was riding a little bit hurt after my falls in the Italian Championship, but today I felt good all day. I’m ready to give it all again tomorrow.”

Andrea VERONA (ITA-TM): “I tried some new parts on my bike after the training day but then I decided to go back to my previous settings because I wasn’t in the flow of things. It was a good idea to make the adjustments because I was able to attack again as I like to do. It’s great to have another victory and I’m super happy.”

Wil RUPRECHT (AUS-Yamaha): “Unlike Germany, I’m not as disappointed with my performance. I fought well all day. I still suffered a lot in the second half of the day and I still need to work on my fitness and my adaptation to living in this new hemisphere.”