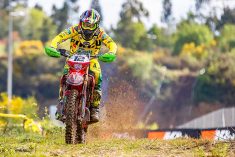 Brad FREEMAN Does it Again! HOLCOMBE Worried!
You really had to be in Santiago de Compostela to witness the incredible turn around in the weather. After torrential rains and strong winds at the start of the week in the ‘holy city’, the 1st day of competition at the Maxxis FIM Enduro World Championship played out under pristine blue skies. The tests were filled with a Spanish fans ready to enjoy watching the best riders in the world. Despite the sunshine, conditions on the track remained tricky; water sections and mud were both on the menu for Day 1.

The EnduroGP riders gave us a fantastic battle throughout all four laps on this first full day of action. Brad FREEMAN (GBR-Beta) took his second victory in a row after his success last Sunday in Portugal. The Beta Boano rider controlled his race very well, Steve HOLCOMBE (GBR-Beta) was left in the wake of his young compatriot. FREEMAN took the head of the race on the 2nd Enduro Test of the day, and never looked back. The Brit fully confirms his status as the most serious rival of HOLCOMBE.

2nd today, Steve HOLCOMBE should still be satisfied with this result. The Beta Factory rider took another podium in EnduroGP and a fresh victory in E3. But at the finish he looked deflated and HOLCOMBE confessed he has been having health problems since the GP of Germany. Without giving any more details, the quadruple world champion admits he’s worried about his physical condition.

For the 3rd time this season Britain reigns, locking out the podium. Danny MCCANNEY (GBR-TM) completed a full English EnduroGP podium. The TM rider worked hard to grab this result. He first had to see off Alex SALVINI (ITA-Honda) and then control Loic LARRIEU (FRA-TM). At the end of the race, MCCANNEY even managed to get within 5 seconds of HOLCOMBE.

The fight between SALVINI and LARRIEU for 4th and 5th place was absolutely breathtaking until the last test of the day. The Frenchman was anxious to erase his double DNF from Portugal. When he started the last test, the TM rider had just under 2 seconds ahead SALVINI and his Honda. After a big push in the final test, he crossed the line with a 6 second advantage on his rival.

In the E1 category, Brad FREEMAN pocketed his 5th victory in as many races. Winning ahead of Thomas OLDRATI (ITA-Honda) and another Italian, Matteo CAVALLO (Sherco).

In E2, at the end of the suspense, Loic LARRIEU took the win over Alex SALVINI. Giacomo REDONDI (ITA-Husqvarna) completed the podium.

In E3, despite not feeling his best, HOLCOMBE took his fifth win of the season ahead of MCCANNEY and an impressive David ABGRALL (FRA-Beta) 3rd.

On great form since the beginning of the season, Enric FRANCISCO (ESP-KTM) has not managed to overhaul the leader of the Junior rankings. But the Spanish rider had the better of most of his other competitors to take a very nice second place at home. It’s certain that he will try the maximum tomorrow to go up one place in the standings and take an emotional home win.

Jack EDMONDSON (GBR-Sherco) was 3rd overall on the day. The Sherco rider managed to get the better of his team-mate, Theo ESPINASSE (FRA-Sherco) and Wil RUPRECHT (AUS-Yamaha) who both tried to threatened the Brit for the last podium spot.

In J1, VERONA topped the podium ahead of ESPINASSE and RUPRECHT. In J2 it was FRANCISCO in front of EDMONDSON and Till DE CLERCQ (FRA-Husqvarna).

Youth 125cc: Nathan BERERD gets debut victory, title leader Hamish MACDONALD suffers injury…
Difficult to choose which news was the most important of the day in Youth 125cc. We will start with the injury of the leader of the category, Hamish MACDONALD (NZL-Sherco) who fractured his collarbone on the 3rd Enduro test of the day. The Sherco rider was evacuated and taken care of at the local hospital. Before his accident, the New Zealander was running in an unusual second place, having previously won 4 out of 4. We hope to see him again soon and wish him a speedy recovery.

Nathan BERERD (FRA- Husqvarna) today became the first Frenchman to win a Youth 125 round since Léo LE QUÉRÉ in 2017. Leading all day, the Frenchman did not suffer from any incident to disrupt his dominance today. He took more than a minute on Claudio SPANU (ITA-Husqvarna). Sergio NAVARRO (ESP-Husqvarna), took his first ever podium at his home race.

In the Champion Lubricants Enduro Open World Cup Champion, the same riders were once again filling the podiums.

David KNIGHT (GBR-TM) won the Senior class for the 5th time this season. He was ahead of Fernando FERREIRA (POR- Sherco) and Enrique VEGA GONZALES (ESP-KTM).

In Open 2-Stroke, there was another win for Portugal’s Goncalo REIS (Gas Gas). He won against Benet GOMEZ (ESP-Gas Gas) and Jorge PARADELO RODRIGUEZ (ESP-Gas Gas). Note that Richard TUCKER (GBR-Sherco) withdrew from the first day of the race with shoulder pain after falling in the Super Test last night.

In Open 4-Stroke, Tom ELLWOOD (GBR – Kawasaki) is the reference to watch this season: 100% success for the Kawasaki rider. Jilani CAMBRE (BEL-Husqvarna) and Fraser FLOCKHART (GBR-Yamaha) completed the podium of the day.

Brad FREEMAN (GBR-Beta): “It was a perfect day, I didn’t make any mistakes, I’m really happy with my riding and the way my bike reacted. The track conditions were better than I had imagined and the test were really good all day.”

Steve HOLCOMBE (GBR-Beta): “I must confess that I am really at a loss. I can’t say much for the moment but something is wrong with my body. I’m exhausted from today and I’m worried about my physical condition. Despite today’s result not being too bad, it does not comfort me at all.”

Danny MCCANNEY (GBR-TM): “I am satisfied and disappointed at the same time. This mixed feeling comes from the fact that I lost a lot of time in the first extreme of the day. I had to fight all day to recover that lost time. My speed is good, I would have preferred to be in the game from the beginning.”

Loic LARRIEU (FRA-TM): “After my poor Portuguese GP, I needed a result to restore my confidence. Today was exactly what I was looking for. I’m happy with this victory in E2 and it’s important to beat Alex and it makes me feel good. But I still want a lot more…”