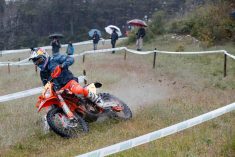 After last weekend’s Hard Enduro opener in Portugal, the second stop of the 2019 series saw riders click into Classic Enduro mode. For day one of the Trèfle Lozérien AMV, the 600-plus entry were faced with over 200 kilometres of riding and five timed special tests. After a cold and damp start to the day, the forecasted rain arrived, ensuring a testing wet, muddy and slippery day in the saddle for all.

At the head of the field it was McCanney who led the way after the opening special test with Watson, Jeremy Tarroux (Sherco – FRA) and Garcia in tow.

On the second special test Garcia hit his stride. Topping the time sheets, he took over control of the race lead and was never headed. Sweeping the remaining three tests, the Spaniard ended day one with a 20-second lead.

Behind Garcia the battle for the remainder of the top three was close. Showing that consistency pays off, Watson held firm and second, edging out McCanney by less than three seconds. Despite focused on Rally for 2019, Yamaha mounted McCanney showed he’s lost none of the speed that took him to the runner-up position in the 2018 Enduro World Championship, slotting into third.

Less than two seconds behind McCanney, Tarroux – the 2017 event winner – is right in the hunt of things ending day one fourth overall. Julien Gauthier (Yamaha) rounded out the top five.

For day two, riders will face yet another gruelling 200-plus kilometre day of riding with four new specials tests before ending with a repeat of today’s fifth test.

Josep Garcia (KTM – ESP): “That was about as good of a day as I could have in these conditions. Having an early start number this year certainly made a big difference in how I could ride the tests and I felt like I was able to show my real speed. The wet grass was slippery, but I never made any major errors and pretty much stayed on two wheels all day. I’ve a good lead ending today but I know that could change with one mistake tomorrow so there’s no reason to let off the gas just yet.”

Nathan Watson (KTM – GB): “It’s been a good start to the weekend. I got one of the fastest times in the first test and that put me in a good mood for the rest of the day despite the rain and cold. The weather made things hard out there – especially in knowing where there was lots of grip and where there was none. Josep was on a mission today and will take some stopping, but I’m enjoying it and keen to up things for Saturday.”

Jamie McCanney (Yamaha – GB): “Yeah I’m happy with the start I made today in what were slippery conditions due to the rain. I was fastest in the first test, but then lost the front end on the second test and had a crash. With the rain starting to fall it was hard to judge the grip levels and I just pushed a bit too hard. It took a few tests to regroup and find my groove again, but third fastest today is good. To be honest, I’ve been out of the Classic Enduro game for nearly eight months racing Rally, so in this company it’s good to see my pace is still strong.”