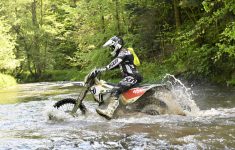 The junior class 1, with the smaller cubic capacity motorcycles, was won by the Finn Roni Kytönen, who had to overtake some slower riders on the track in front of him, otherwise he might have been even better than his fourth place in the overall standings.

How demanding the track and the special stages were is most evident in the women’s class: there the English rider Nieve Holmes won – although she got an additional penalty minute on the track: “I was in time at the time control in time, but I still had to refuel,” said the Sherco rider, who switched from motocross to enduro only two years ago. “I drove more cautiously and looked more closely so that I wouldn’t make any mistakes in the tests,” she revealed her secret recipe. That worked because the demanding specials offered many opportunities for mistakes.

The women also had to fight hard on the track, just three of the 13 female riders remained without penalty points.

But because bad weather is predicted for the second day, the organiser has installed some defusing measures on the stage as well as in enduro and extreme tests.

The complete results of all classes are attached.

You can find the live timing from Sunday, May 19, here: